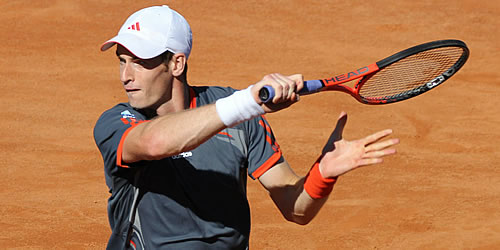 It may be a while before Andy Murray’s his team and his fans know just what toll his second-round match took but, for now, they can only stand back and admire the fortitude he displayed in reaching one step deeper into the 2012 French Open.

Murray has made no secret in recent weeks of a persistent back problem. For although he played some excellent tennis during the early hard court season, winning Brisbane, reaching the finals in Dubai and Miami, and taking Novak Djokovic to the limit at the Australian Open, by the time the clay season came around, things were becoming difficult.

Murray reached the quarters in Monte Carlo and Barcelona but was forced to pull from Madrid for some rehab.

But on his return in Rome, things were still not right and he lost early to Richard Gasquet.

What, then, would Paris bring? Well, Murray’s first match against Tatsuma Ito did little to calm the nerves. It was a see-sawing affair that delivered first-rate Murray in the first and third sets but a lack-lustre Murray for much of the second. So it was always on the cards that Jarkko Nieminen might give him a few problems.

Now 30, the former world No13 won eight matches to take the first title of 2012 in Sydney and he had reached three Grand Slam quarter-finals in his time. But Murray had beaten Nieminen in all three meetings and although he could certainly test the Murray movement, he was no Gasquet.

And indeed at the start, it looked as though Nieminen would break down first, surviving three deuces before he held the opening game.

But it soon became apparent that the match would not run to script. In the very next game, the Finn broke to lead 2-0 and, a strong hold later, the alarm bells started ringing for a sluggish, tight Murray. So restricted was he in his back that he could serve at barely half speed, and he called for a medical time out.

After some intense manipulation, the best Murray seemed able to do was stand his ground and go for outright winners. It paid off: He made a break for his first game on the board. But despite two more quick fixes for Murray from the physio, Nieminen broke again and served out the set, 6-1.

Surely Murray would call it a day. Surely the call of Wimbledon and the Olympics would be excuse enough to warrant retirement. Indeed he afterwards confessed that his team were ready to call a halt:
“The guys were telling me to stop after the first set. We spoke about it before the match briefly, when I was warming up. I decided to play. I mean, sometimes guys can start to get a little nervous, you can start to feel a little better, and a combination of the two helped me get through.”

His thinking may have been optimistic but it turned out to be spot on despite, in commentator Jim Courier’s judgement, Murray “looking geriatric at times.”

The Scot found himself 4-2 down in the second set but just when things seemed at their worst, Nieminen began to miss a few forehands and handed an easy break to Murray in the eighth game.

Perhaps it would be a temporary blip from the Finn who pulled Murray back from 40-0 to earn three chances to break in the ninth—helped not a little by two double faults from an opponent still struggling with his service motion to the ad court. But Murray took off some pace, got himself into the rallies, found some penetration with his cross-court forehand, and held. And that marked a dramatic turning point.

Nieminen, perhaps frustrated at seeing so many chances go begging, collapsed on his own serve and was broken to love on a final double fault. The set was Murray’s and the momentum was Murray’s. There were also a few glimpses of brilliance from the Scot—a stroked forehand drop shot, an inch-perfect lob—to support what had seemed like foolhardy optimism.

Murray stayed with the tactics that had turned things around: rolling in slower serves with higher accuracy—up to 92 percent by the third set—working his forehand to the full width of the court, breaking up the patterns with drop shots and deft backhand cross-court angles. His body gradually loosened up, his movement improved, his confidence grew.

The second set unforced error count of 16 dropped to only four in the third, and then only six in the fourth set. Conversely, the swing in Nieminen’s game showed he simply could not respond to the higher level of tennis he was facing. After just four errors in the opening set he added 47 in the remaining three.

Not until the second game of the third set did the Finn halt a run of 11 straight points and not until the fourth game did he get on the scoreboard, 1-3. He faced more break points in the sixth game and, slashing at anything he could reach to no avail, he went 5-1 down. Murray served out the set, 6-1.

Murray was clearly moving much better, though his serve never fired at full power and he made not a single ace in the match. Nor did he sit down at the change-over between sets. But what had started as a near-impossible mountain to scale for the Scot now looked like a stroll in an Alpine valley. He was reading his opponent’s game and countering it with deep, cross-court drives on both wings.

Nieminen served a double fault to concede an immediate break in the first game, held only twice more, and double faulted for another break in the seventh. Murray served out the set, 6-2, for a remarkable win.

Murray survived this test of his character and his back with, in the end, far greater ease than had looked possible at the halfway stage. Some of that must also be put down to Nieminen’s loss of confidence, as Murray pointed out:
“He helped out a little bit, got nervous at the end of the second set, but I don’t even know how I won to be honest.”

And in truth, the rest of Murray’s comments will give more optimism to his forthcoming opponents than to his supporters:

“I think my back went into spasm. It was sore this morning when I got up…was sore 20 minutes after practising—it was really bad. I came out and tried it, and I couldn’t put any weight on my left leg. Then, it started to loosen off a little bit. I’ve had this a bit in practice before, and I’ll just have to see how it is later.”

He may be relieved to have Colombian Santiago Giraldo in the next round than the anticipated seed, Bernard Tomic, but even the strongest spirit will be tested by what lies beyond that.

Richard Gasquet does not play until the end of the day, but David Ferrer has barely broken sweat in his two matches thus far and Rafael Nadal—well he lost only five games in his first and four in his second match. He looks, it has to be said, the best he has been since winning this title precisely one year ago.