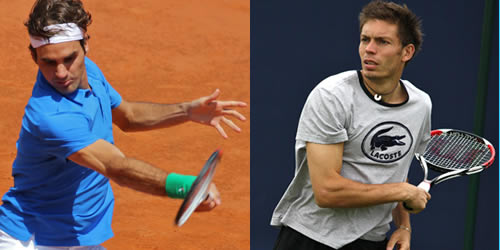 The draws in Paris did, of course, boast ample measures of French interest and not simply because of the wild card places that are the privilege of the host nation.

Yes, there were six of them among a generous tally of 17 home heroes, but who would deny the delightful 34-year-old Arnaud Clement, enjoying in his 15th and last Roland Garros? He played his first in 1997 but never got beyond the fourth round—in 2003—making it his least successful Grand Slam.

Clement even managed to make headlines along the way: He won his first-round match in a five-set drama that ended with opponent, Alex Bogomolov Jr, retiring at match point down with leg-buckling cramps.

“Exemplary, that’s the word I would use to describe him,” said fellow Frenchman Jo-Wilfried Tsonga after Clement finally bowed out, in another five-setter, against Belgian David Goffin.

And who would deny the 30-year-old Eric Prodon, just outside the cut for the main draw, and with perhaps a last chance to get past the first round 12 years after his first French Open? Three hours and four sets saw his hopes dashed again.

And more than all of them, who would not have wished to be part of the heart-warming story that unfolded with the closing match of the second round, where Paul Henri Mathieu entered the record books after playing the most games in a match at the French Open since the introduction of the tie-break?

Even without the drama of the match itself, the 30-year-old Mathieu was news. He had played just 10 matches this year before Paris and missed the whole of 2011 with knee injury. A former No12 back in 2008, he had not won a title since 2007 and not reached a final since 2009: He entered the tournament ranked No261. He had also already come back from two sets down to beat his first round opponent, Bjorn Phau.

Against such a background, a third round place looked like a foreign land, unreachable against the No10 seed John Isner. And yet he came out the winner of a 76-game marathon, 18-16 in the final set.

That it should have been won against Isner, who set another record against another veteran Frenchman, Nicolas Mahut, to win the longest ever Wimbledon match in 2010, added still more piquancy. Little wonder there was not a dry eye in the house, not least from Mathieu, who confessed “I dug into my innermost depths.”

He is now just one match away from equalling his best performance at his home Slam. Not bad for a man who had his knee rebuilt last year, and not bad news about his next opponent, Marcel Granollers, who was also part of a marathon match of little short of five hours. Mathieu’s dream could continue…

The Frenchman, though, was one of four 30-plus home players who, against most of the odds, filled a place in each quarter of the draw.

In the bottom quarter of Mathieu’s half was the No29 seed, Julien Benneteau. And though, as a seed, he belonged in the third round, his run-in to Paris made it unlikely that he would even make it to the starting line.

For a start, Benneteau reached his current career high only a month ago, having never broken the top 30 before—and last summer he was outside the top 100.

Then, amid this late-career success, disaster struck just weeks ago in Monte Carlo when he fell heavily in a third-round contest against Andy Murray, fractured his elbow and badly twisted his ankle.

Yet he has scored wins over Mischa Zverev and Dmitry Tursunov to reach the third round, and was as surprised as anyone at the speed of his recovery: “Just for me being capable of playing was the first victory. That was my objective…I was improving every single day, and this is when I thought: ‘Yes, this is possible. I can do it.’”

His ultimate aim will now be to equal his best result in Paris, a quarter-final finish in 2006, but if he does, he will most likely face the ultimate test in Rafael Nadal. Benneteau’s immediate problem, though, is Janko Tipsarevic—the very man he beat in the first round of this tournament in that quarter-final year of 2006.

The other two French veterans to make the third round had altogether bleaker prospects of going any further.

The first of them was described as “like a lamb to the slaughter,” for he was drawn just five places below the top seed and world No1, Novak Djokovic.

Nicolas Devilder is 32, measures just 5ft 8in and is ranked 286. He had never ranked higher than 60—in 2008—never been in a main tour final and had not played in a main tour match this year before Paris. Last year, he played only one, and lost it , and in 2010 he played none at all.

So of all the Frenchmen in the draw, Delvinder’s third round run was the most unexpected achievement. His problem was compounded by, of all things, the schedule. He and Djokovic had to sit out another marathon match between Gilles Simon and Stan Wawrinka—little short of five hours of action that had cranked the French crowd to its highest pitch. With the clock ticking to the fag end of the day, he faced not only a hyped audience but a Djokovic determined to get his match done and dusted in the remaining hour and a half of light.

It was the most ruthless of scenarios for the most inexperienced of the French 17, and the normally carefully-paced Djokovic swept to a win in the allotted light for the loss of only five games.

And so to the final quarter, the last French veteran making a stand against all-comers in perhaps the most aesthetically pleasing two and half hours that the Parisian purists could wish for.

Mahut was the very man who lost to Isner, 68-70, in the fifth set at Wimbledon two years ago, a quietly-spoken man with spade-loads of talent. Yet that talent had never taken him to the heights, especially on the clay of his home Slam.

For Mahut has the game for grass—as his battle against Isner showed—with his only career finals coming on the green stuff and his is only third-round in a Slam coming at Wimbledon in 2006.

With a knee problem at the start of the clay season, he had taken time out in the run up to Paris, and perhaps that was behind the showcase he put on against one of Paris’s favourite sons, Roger Federer.

With both men favouring attacking tennis, willing to rush the net, play touch volleys and both wielding an elegant single-handed backhand, it was destined to be entertaining, first-strike tennis, even if a one-sided, affair. However few would have guessed from the match that one of the protagonists had 74 titles to their name and the other none.

Federer danced his way to the first set with little trouble, but Mahut upped the ante, serve and volleying for all he was worth, chip and charging on return of serve and was rewarded with the only break point of the second set. He took it and the set, only to be helpless against a Federer serve that dropped only one point in the third set.

The denouement still thrilled: Mahut’s fist pumped, the Philippe Chatrier crowed Mexican waved and the Frenchman broke back what looked like a decisive Federer break in the fourth set. Only one game short of a tie-break did Federer finally pin down the bubbling tennis of Mahut to break and serve out the match, 7-5.

It may not eclipse from the memory banks the record-breaking match at Wimbledon but perhaps this match will remind French fans of the richness and the depth of their men’s tennis.

For every Simon grinding out his spirited five-set wins on edge of the top dozen rankings at age 27—and he only just failed to win his third five-setter of the tournament against Wawrinka—there is the charismatic Tsonga at a career-high No5 and into the French fourth-round for the third time.

For each 32-year-old Benneteau and Michael Llodra there is the 25-year-old talent of top-20 players such as Richard Gasquet—due to play in the third round against Tommy Haas tomorrow—and Gael Monfils—out of Paris with injury.

Both Tsonga and Gasquet beat Federer last year, Monfils did it the year before, Benneteau in 2009. And although Mahut fell just short of a similar victory, he forced Federer to play at the highest level—the Swiss made 54 outright winners in the four sets—for more than two hours.

Even Madame Mahut, such a fan of Federer that her husband feared she may sit in the Swiss box, will bottle that memory for posterity.