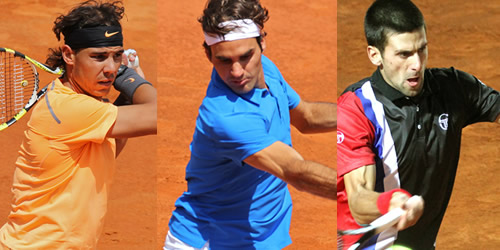 Nadal was victorious in Barcelona, Monte Carlo and Rome ahead of Roland Garros Photo: Marianne Bevis

This week in Paris, the sun has suddenly put its hat on — and what better time to bathe the sparkling burnt orange courts of Roland Garros with early summer heat?

For this week, the three men who have dominated Grand Slam tennis in recent years are all gathered in France’s capital to acclimatise to the most sacrosanct clay in the world.

Since the start of 2004, only three men have had the temerity to deny Roger Federer, Rafael Nadal or Novak Djokovic a Slam. Gaston Gaudio did it in Paris in that year; Marat Safin won the Australian Open in 2005; and Juan Martin del Potro managed it in New York in 2009.

Andy Murray has his own targets in Paris: a first Major title after making three finals, and becoming the first British man since Fred Perry in 1936, to do so. But thus far, he has managed only to hold onto the coat tails of the three modern-day record-breakers, and once again, each of them stares history in eye.

Djokovic has won four out of the last five Slams, missing the French title last year after a semi-final loss to Federer. This year, the French crown takes on even greater significance for, by winning it, Djokovic would become the first man to hold all four Grand Slam titles simultaneously since Rod Laver in 1969. And that is something neither Federer nor Nadal has managed to do.

Should he succeed, he also leaves the way open, in Olympic year, to becoming the first man ever to win the Golden Grand Slam: only Steffi Graf has done it before.

Nadal — who does have a ‘career’ Golden Slam — has another record in sight. Currently level with Björn Borg on six French Open titles, a win this year would take him to a record seventh.

Federer may put the ultimate prize, Olympic singles gold, at the top of his wish list this year, but if he was to win a second French Open title he would become only the third man to win the complete Grand Slam set twice. He would also become one of an exclusive band of men to win a Major after turning 30. And he could overtake Jimmy Connors’ Open record of 233 Major match wins.

Big ambitions all, and under-pinned by great runs of form from all of them. Missing sick or injured are Gael Monfils, Mardy Fish, Robin Soderling and Kei Nishikori, but who else might make history or, by halting the threesome’s dominance, break history?

The physical and mental will the Serb showed in beating first Murray and then Nadal in five-hour matches at the Australia Open showed what depths Djokovic has when the stakes are at their highest. And there is certainly plenty to motivate him in this year’s French Open.

The stakes are high in Paris not simply for his chance of the complete Grand Slam but also for laying down a marker ahead of the Olympics. There is also the small matter of claiming dominance on clay from the unquestioned master.

Djokovic did fall to Nadal in their two clay finals this year — Monte Carlo and Rome — but won a steely semi against Federer in the latter to gain a modicum of revenge for his loss to the Swiss in the semis in Paris last year.

Before they meet again, Djokovic could face Lleyton Hewitt in the second round in a rematch of this year’s Australian meeting, but the 31-year-old Aussie has barely played since that four-setter.

Next should come Jurgen Melzer. The Austrian beat Djokovic in Paris in a terrific five-setter two years ago but has slumped in the rankings in the last year.

In the third round, the No1 will face the survivor of Fernando Verdasco, who beat him twice on clay in 2010, and either Nikolay Davydenko or Andreas Seppi, who had such a good run in Rome last week.

In the bottom segment, Jo-Wilfried Tsonga should survive Viktor Troicki but it may be Gilles Simon or Stan Wawrinka who makes it to the quarters — and it’s been several years since either has beaten Djokovic.

Matches to look out for: Seppi v Davydenko, Round 1; Simon v Harrison, Round 1; Troicki v Bellucci, Round 1; Wawrinka v Simon, Round 3.

He may be the elder statesman of the top quartet — 30 compared with the 25 years that Djokovic, Nadal and Murray each has on the clock — but for a man embarking on his 50th straight Grand Slam, he remains in remarkable shape.

Since last year’s US Open, he has shown fine form, too: seven titles, including three Masters, three 500s and the WTFs. In Madrid, he scored his first title on clay since Madrid and Roland Garros in 2009 and comes into the French Open with wins over every other man in the top-10 in their most recent matches — except Djokovic.

It was against the Serb that he suffered that loss in New York and it was against him that he also lost in Rome last week. As luck would have it, the draw has thrown them into the same half again in Paris.

It’s a challenging draw for Federer through most of his quarter, though. The second round throws up old adversary David Nalbandian, who had Murray on the ropes in a quality three-setter in Rome. He also knows what it’s like to beat Federer, but over a best-of-five match, the Swiss should dominate.

Chance has also thrown into his path Andy Roddick, who won a very rare victory over a tired Federer in Miami, but clay is not the American’s surface.

In the fourth round, it could be another old adversary, Feliciano Lopez, who took Federer to a third-set tie-break here and to three tie-breaks in Madrid last year.

But lurking in the bottom eighth are the real danger men, either del Potro or Tomas Berdych — if the former gets passed Marin Cilic. Berdych has been a growing force this season, beating Murray in Monte Carlo, del Potro in Madrid, Janko Tipsarevic on indoor clay, and taking both Federer and Djokovic to three sets on outdoor clay.

And all that is before the Paris crowds get their much-anticipated 2011 semi-final rematch between Federer and Djokovic.

Murray must wonder what he’s done to deserve it. For the second week in a row, he has been drawn not only in the same half as Nadal — for the seventh time in the last eight Slams — but sees along the way the man who beat him in his second match in Rome, Richard Gasquet, and a quarter-final against possibly the most dangerous clay court player outside the top four in David Ferrer.

Murray has yet to reach the final of a clay tournament and, despite some good performances on the red stuff last year — the semis in Rome, Monte Carlo and Paris — he has had rather less success in 2012, not helped by a niggling back problem. Indeed, he has failed to get past the quarters in his three clay-court tournaments.

He now appears to be fully fit and has played an exhibition match prior to starting here, but that does not make the draw any easier. The third round could be the big and talented Bernard Tomic, who has taken some useful clay scalps this season, and then comes Gasquet — unless the equally dangerous Alexandr Dolgopolov is back to form and fitness after his retirement in Rome.

Ferrer himself has some tricky opponents before the quarters: Mikhail Youzhny, Marcel Granollers and John Isner. But the Spaniard has two clay titles this year and was beaten by Nadal in a tight Barcelona final. He has also beaten Murray in all three of their clay meetings, though the last was two years ago.

Matches to look out for: Young v Dimitrov, Round 1; Youzhny v Haase, Round 2; Gasquet v Dolgopolov, Round 3; Murray v Gasquet, Round 4; Isner v Ferrer, Round 4.

If Nadal wanted to reassert himself as the master of clay after losing both Rome and Madrid to Djokovic last year, he could not have done it with more panache.

As well as defending his titles in Monte Carlo and Barcelona — beating Djokovic in the final of the former — he went on to win back his Rome title without losing a set, despite playing Berdych, Ferrer and Djokovic in succession.

He has regained the strut, the glower and burgeoning confidence before he even opens in Paris. He is, in any case, the title-holder here too, and the draw should not bring any great change to that.

Nadal’s first opponent is ranked 111 — the lowest opener faced by the top four — probably followed by Denis Istomin and then the lowest seed in the draw, Florian Mayer. The hapless German also faced Nadal in Rome having taken out Milos Raonic, and the big Canadian also sits in Nadal’s segment again.

Raonic has had some success this season on clay, beating Murray in Barcelona and taking Ferrer and Federer to tie-break finishes, but Nadal has had the better of both their previous meetings, and on hard courts at that.

It is even possible that one of the form clay players of the moment, Juan Monaco, will stop Raonic. The Argentine has won two clay titles this year, pushed Djokovic to three sets in Rome and is near his best ever ranking. But his only win over Nadal came from a retirement back in 2007.

Picking Nadal’s quarter-final opponent is a lottery. Nicolas Almagro is likely to beat Philipp Kohlschreiber on clay and, on current form, may also beat Tipsarevic. But he has never beaten Nadal in eight meetings — though he took him to two tie-breakers here in 2010 — and neither has Tipsarevic.