French Open 2013: British No1 Laura Robson loses 6-3 6-2 to Denmark's Caroline Wozniacki in the first round in Paris 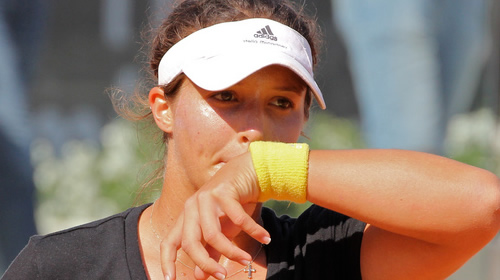 On paper, the teenage Briton Laura Robson had—and not for the first time—suffered an unlucky fall of the cards in the French Open draw.

She would face in her first match the former world No1, current No10, Caroline Wozniacki, and do so on one of Roland Garros’s biggest show courts, Suzanne Lenglen.

Factor in that Robson had scored just eight wins in 20 matches this season, and had made six first-round exits—all but one to lower-ranked players—and her latest challenge looked about as tough as facing the formidable Lenglen herself.

But things were not as the form-book may have suggested. Wozniacki, since conceding the No1 spot at the start of 2012, was struggling with the one element of her game always to shine: her consistency. This year, she had yet to add to her 20 career titles, her best result a final at Indian Wells. And she could boast just one win in her five clay tournaments, making first-round exits from her last four events.

Then there was Robson, a young woman constantly to throw the form-book out of the window. She likes the big stage, the big occasion and the big player. So despite some see-sawing form since she broke into the top 50 for the first time this season, she has developed something of a reputation as a giant-killer.

At the Australian Open, she knocked out former Wimbledon champion Petra Kvitova, 11-9, in the third set. Three weeks ago in Madrid, she beat No4 seed Agnieszka Radwanska for the loss of just four games and very nearly took out former French Open champion Ana Ivanovic in the next round, too, finally losing a third-set tie-break.

Go back to last year, and Robson beat two Grand Slam champions back-to-back at the US Open: Kim Clijsters and Na Li. She finally went down to defending champion Sam Stosur.

Then at the 2012 Olympics, Robson pushed Sharapova to a first-set tie-break, as she had done as a 17-year-old at the 2011 Wimbledon.

Only last week, at her debut appearance in Rome, she drew not one but two Williams sisters in her first two matches. She beat Venus in the first before falling to eventual champion Serena in the second, but she won more games than any of Williams’ opponents apart from Victoria Azarenka: they managed four apiece.

So here she was, playing only her second main draw match at Roland Garros, and tipped by many to cause an upset—as though the relentless baseline backboard of Wozniacki was not a tough enough proposition already.

The conditions were hardly in Robson’s favour, either—not in Paris the hot and dry air of Rome but instead cooler, heavier, and with not a ray of sun to speed her along.

Even so, she stepped in from the first game, forcing Wozniacki to defend an opening break point. She applied the pressure again in the third with her first down-the-line winning forehand to force 15-40, but Wozniacki focused on Robson’s backhand and then had her scampering across the baseline in defence to no avail.

The Dane held and Robson briefly foundered, going for the lines and missing by a fraction time and again. Two double faults sealed a nervous break—but not for long.

Robson, 1-3 down, opened her stance and her shoulders to pound winners cross-court on the backhand and down the line on the forehand to make a quick break back.

But that did not last either: in a near repeat of the fourth game, Robson double-faulted at 15-40 down and the gap was 2-4, soon 2-5, as Wozniacki served her easiest game of the match, a love hold. And although Robson held her next serve with an ace, her aggressive tactics were producing more errors than winners, 20 to 15—three times the rate of Wozniacki on both sides of the equation. The Dane took the opener, 6-3.

Robson held the first game of the second set, but it was an almighty effort to do so, punctuated by winners one moment and errors or double faults the next. Three times she faced a break point but held. She would manage just one more game in the set, as Wozniacki’s movement and her percentage play paid off.

The Robson frustration grew as Wozniacki eliminated almost all her errors—the Dane made just three to the Briton’s 19 in the second set—to break in the third and the fifth games. Too late the sun made an appearance to see Robson reel off five straight winners to pull back a 0-40 deficit and break in the sixth.

The only further respite, though, was Wozniacki’s first double fault of the match as she served for the set at 5-2, but the Dane did not drop another point on her way to a 6-2 victory, and her first win since the first week in April.

With British No3 Johanna Konta, No4 Anne Keothavong and No5 Tara Moore falling in qualifying, the British presence in Paris is now in the hands two Britons just making their return to tournament play: No50 ranked Heather Watson and Elena Baltacha, down at 200 but with a protected rankings after a long absence following foot surgery last year.

Watson announced she intended to take a break from tennis in March after first-round defeats in Indian Wells and Miami, but changed her mind a day later. She then pulled out of Charleston in April with a leg injury, and blood tests revealed that she was suffering with glandular fever.

She revealed that she had been playing with the condition for some time: “Maybe it’s just a sign that I needed a break. I know I’ll come back stronger, fitter and more determined.”

She is making that return at Roland Garros after just two weeks of training. She will play, by a quirk of fate, the woman who Baltacha faced in her first main-tour match of the year, last week in Brussels, the Swiss woman Stefanie Voegele.

Baltacha will play New Zealander Marina Erakovic, ranked 92 and with just one win in her last eight matches.