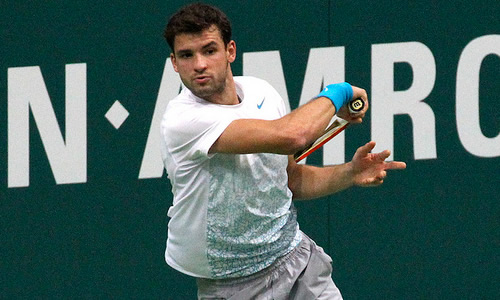 Grigor Dimitrov will face Novak Djokovic in the third round at Paris Photo: Marianne Bevis

Grigor Dimitrov believes facing world number one Novak Djokovic will bring out the best in the Bulgarian after a straight-sets win over Lucas Pouille on Thursday.

The 26th seed secured a 6-1 7-6 6-1 victory over his unseeded French opponent to set up a third-round meeting with last year’s Roland Garros finalist Djokovic.

The 22-year-old, who beat Djokovic in Madrid in the lead up to the French Open, is confident he can bring “a bit more steam” when he faces the tournament’s top seed.

“I feel I’m playing good. I know I can bring a bit more steam into the game,” said Dimitrov. “I think I might need that in the next round.

“I’m have doubles to play in the meantime, so hopefully I can get a few things worked out before that.

“So I’m actually really looking forward to the next round. Hopefully it’s going to bring out the best out of me.”

He added: “I have been obviously thinking about it [facing Djokovic].

“I didn’t have so many sets to fight in, and in a way, that gives you an extra, extra boost.

“I have a good level of energy coming into that match, knowing that, I know I basically have more power than whoever I’m playing the next round.

“Everything can happen obviously in that match. It’s against the number one player in the world.”