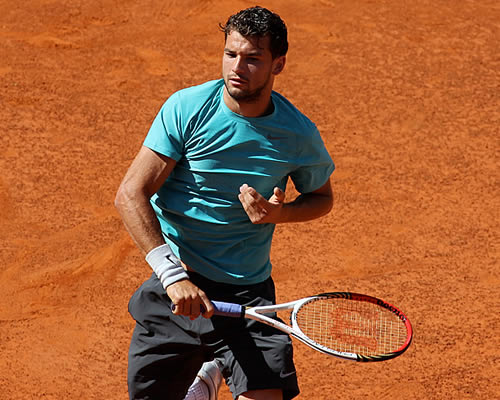 Grigor Dimitrov will face Novak Djokovic in the third round Photo: Marianne Bevis

Dawn broke on another damp morning in Paris, but the final day of second-round action got under way on time, albeit under gloomy, cool skies.

Perhaps the unpromising conditions were to blame for the near-empty show-court that welcomed one of the most attractive matches of the day at Roland Garros. It boasted one of the young stars of the circuit, the handsome and gifted Grigor Dimitrov, against home-grown teenager, Lucas Pouille, who had created some buzz of his own after advancing for the first time to the second-round of a Grand Slam.

Dimitrov, aged 22, has been one of the golden prospects in tennis, the young talent tipped to break into the top ranks ever since he captivated Wimbledon by winning the junior title in a style reminiscent of that tournament’s favourite son, Roger Federer.

It did, in the event, take Dimitrov time to mesh his many attributes, but 2013 has seen him finally blossom. He reached his first final in Brisbane, took Rafael Nadal to three sets in Monte Carlo, beat No1 Novak Djokovic in Madrid, and now entered the French Open as a seed for the first time in a Grand Slam, at No26.

His next target was to reach the third round of a Major for the first time, and he was given a first leg-up when his first opponent retired in the second set. Now he faced, in wild card Pouille, the world No324 playing in his first Major main draw.

Dimitrov certainly helped to lift the gloom over Suzanne Lenglen with his opening array of shot-making. After one blip in the first game, surviving his only break point of the set, he went on the offensive, time and again opening the court with his whipped forehand before racing in for a volley finish.

He played, in short, the kind of all-court tennis that has won him that ‘Federer’ moniker: Whether in his single-handed backhand, the stance of his serve delivery, the tactical precision of that forehand-volley combo, the echoes are eerie.

If there has been one area where Dimitrov struggled to match Federer, it was in his movement and footwork. But this year, and in this match, those areas too showed improvement. And playing an opponent with the same inclination for offensive, all-court tennis—Pouille, like Dimitrov, cites Federer as his model—it made for some lovely exchanges, especially around he net.

Pouille was certainly not overwhelmed by the score-line nor by the play of his opponent. He continued to try and take the initiative, rushing the net on his opening serve to win his second game of the match. Dimitrov countered on his own serve, winning every point at the net, and when he broke in the third game, the French cause looked lost.

Not one bit. A poor patch of serving from the Bulgarian in the sixth gave Pouille the opening to break back, and he held his own serve to love. It was the cue for both men to hit their stride as the seats around the arena began to fill with increasingly enthusiastic fans.

There is nothing the French love more than bold and stylish tennis—and for half an hour, that is what both men delivered simultaneously. And if there is another thing the French like, it is cheering on their own, and here were two players with Paris in their veins: Dimitrov lived and trained in Paris until his move to Sweden last summer while Pouille lives and trains here now.

The Dimitrov serve found its groove again, while Pouille began to find more rhythm and depth on his forehand. As each began to read the other’s game more readily, they were able to build longer and more complex rallies, too—until one or other ghosted in for a volley winner.

This set alone boasted 13 points won from 17 net points, and it took them to a deserved tie-break. Dimitrov opened an early 5-2 lead and held onto it with some timely serve winners, 7-4.

And they only just completed the set, for the umbrellas were already up, and the covers were quickly pulled across the darkening dirt.

It would be over an hour before they returned, this time to a ready-and-waiting crowd. And now Pouille had switched from blue to the same white shirt sported by Dimitrov. Indeed the only difference in their apparel was the white cap pulled down, teenager style over teenage-straggly locks, onto Pouille’s head.

The break, however, had disrupted the Frenchman’s rhythm, and he was quickly broken and down 3-0. Gradually he began to find his range again, attacked the Dimitrov serve and earned two break points—but he seemed fated. Already the rain was pouring down, and he could not press home his advantage.

They left court for a further hour with Dimitrov just two games from victory, 4-1. When they resumed, the Frenchman’s game was as cold as after the first rain-break. The errors flew and Dimitrov finished the job in just minutes, 6-1.

The Bulgarian’s assessment of his performance reflected the new confidence with which he seems now to be playing: “I feel I’m playing good. I know I can bring a bit more steam into the game. I think I might need that the next round.”

He’s not wrong. Dimitrov’s most acclaimed win, not just this year but in his career, was his 7-6, 6-7, 6-3 victory against Djokovic just a few weeks ago. So when the Paris draw threw the same two men—this time both seeded—into a third-round clash, the pencils were already being sharpened.

Within an hour or so of Dimitrov booking his place for their third meeting this year, Djokovic did the same with consummate ease—dropping just four games. He played, in Guido Pella, a man ranked 83 and aiming to win only his second Grand Slam match: His first was against Ivan Dodig in the first round, a 4-6, 6-4, 6-3, 2-6, 12-10 marathon.

With the ankle strain that hampered his early clay season now behind him, and his Holy Grail, the only Grand Slam missing from his resume, on the horizon, Djokovic will want to make a similar statement against the young Bulgarian, and set out his intentions with 29 winners and 17 out of 23 net plays against Pella.

But Dimitrov hit 37 winners and made 17 points at the net in his own match: The scene seems set for an intriguing contest to take early control between him and Djokovic.

Dimitrov is certainly confident, and is playing some quality, aggressive tennis. The bigger question may be, has his new training schedule in Sweden given him the physical endurance to outlast Djokovic in a best-of-five Major?

The world will be watching for the answer.

French Open 2013: Heather Watson ‘gutted’ to crash out in first round