French Open 2013: Novak Djokovic, Tommy Haas and Stanislas Wawrinka all book their places in the quarter-finals in Paris 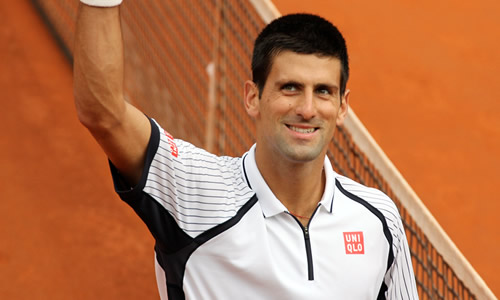 Novak Djokovic arrived in Dubai this year fresh from winning a record third consecutive Australian Open title. He was, naturally, upbeat and optimistic about his season, and went on to win his fourth Dubai title without dropping a set to extend his winning streak to 18.

The streak came to an end at the semis of Indian Wells, but Djokovic made it quite clear in Dubai that he was not driven by such things.

“I’m not thinking about another streak and trying to overcome the one I had in 2011. It’s really hard to ask myself for something that is maybe impossible. But knowing I’ve made it gives me that mental edge and confidence that I need to approach every tournament with self-belief.”

No, the world No1 went on to make it clear—just as he has done ever since—that he had one very particular ambition to fulfil:

“I’m not hiding it, that’s for sure. Priority No1 is probably Roland Garros because it’s the only Grand Slam I didn’t win. But the mindset is still very simple, taking one tournament at a time.”

At the time, Rafael Nadal, the man who deprived Djokovic in his only French final last year, had just returned to competition after seven months away with injury, and quickly got into his clay-court stride with wins in South America’s Golden Swing, but the Serb was unperturbed. He certainly did exude confidence.

“Even last year, when he was playing really well on clay, I thought a few points decided the winner of our matches on clay, and I think I got better on the surface. Rafa is definitely the ultimate challenge, the toughest to beat, the king of clay. But we don’t know what’s going to happen until Roland Garros.

“I have physical condition, I have a lot of self belief in my game, and that experience of winning the big tournaments and playing on the big stage also helps me to stay calm and composed and wait for my opportunities.”

As if to prove his point, Djokovic began his clay season with a first Monte Carlo title, ending Nadal’s 46-match winning streak at the tournament, and became the first player to win three clay-court finals against Nadal.

Madrid and Rome were less successful as Djokovic nursed an ankle twist picked up in Davis Cup, but with Paris, he has steadily played himself into the form that earned him the first Grand Slam of the year.

From an average-looking victory over David Goffin, 7-6, 6-4, 7-5, to a swift dismissal of 83-ranked Guido Pella for the loss of just four games, to his considerably more impressive victory over the man who beat him in Madrid, Grigor Dimitrov, Djokovic showed every sign of playing himself into perfect form with perfect timing.

Along the way came his 500th match-win, but also came news of the death of the coach who first set the Serb on the road to tennis success, Jelena Gencic.

He did not need any extra incentive to reach his goal of becoming the eighth man in history to complete the career Grand Slam—but he had it: “She’d be mad if I passed up the chance to fulfil our last wish…I feel even more responsible now to go all the way in this tournament: I want to do it for her.”

In his very next match, against the in-form Philipp Kohlschreiber, he had to dig deep to contain some show-stopping tennis from one of the most elegant players on the tour. An upset looked entirely possible: the German had won their only previous clay meeting in straight sets—here, in 2009.

The German, indeed, took the first set, fending off two break points at 5-3 to do so. Djokovic had to work hard to make any impact in the second set, as well, finally breaking for the first time in a nine-minute fourth game, while Kohlschreiber failed to convert six chances to break. The Serb again took his only opportunity of the third set, and broke twice more in the fourth for a 4-6, 6-3, 6-4, 6-4 victory.

It took Djokovic to his 16th straight Grand Slam quarter-final where he will now take on one of the men of the moment: Tommy Haas is the oldest man to reach the Roland Garros quarters since 1971 and the first German to do so since 1996.

The 35-year-old, who has surged through the rankings in the last year to be seeded No12, reached his first French Open quarter-final with a resounding victory over No29 seed Mikhail Youzhny, 6-1, 6-1, 6-3.

Haas is now just one win away from 100 victories in a Major, but knows it will take every ounce of his fine current form to achieve it:

“It is one of the biggest challenges in tennis, if not the biggest one right now, playing against the No1 player. [He is] somebody that’s very, very eager to win this title—[the] one thats missing in his collection.

“What I’m really proud about is that I reached the quarter-finals here for the first time, not knowing if that was ever going to be possible. It’s a great success for me.”

But it would be foolhardy to bet against Haas, judging from his last year. Apart from beating Djokovic this spring in Miami—going on to reach the semis—he also beat Roger Federer in the final of Halle last summer, reached three more finals and won the Munich title. And any question about the fitness of the veteran was dispelled in his dismissal here of John Isner, 10-8, in the fifth set in the third round.

Soon after Djokovic and Haas advanced to their quarter-final date, birthday-boy Nadal scored his 56th win in 57 matches at Roland Garros with a 6-4, 6-1, 6-3 victory over No13 seed Kei Nishikori. It was his easiest win so far this year—he dropped sets against his first two opponents and survived an opening set tie-break in his third match. So he no doubt enjoyed his birthday celebrations rather more than anticipated when his next opponent battled through perhaps the match of the tournament so far.

No7 seed Richard Gasquet and No9 seed Stan Wawrinka produced an electric atmosphere on Suzanne Lenglen with a scintillating display between two of the greatest backhands in tennis, both single-handed weapons capable of cutting through any opponent.

Both had been in fine 2013 form, both were former Roland Garros boys’ champions, both were bidding to reach their first French Open quarter-final. And here, both were willing to attack and attack again to take control of the match, with more serve-and-volley plays than the rest of the day’s matches combined—approaching 100 by the match’s five-set conclusion.

Fortunes swung back and forth, Gasquet just taking the first two sets, Wawrinka fighting through a thigh injury and the dismissal of a line-judge to level 7-5 in the fourth. It produced not just tense drama but a match of the highest quality. By its four and a quarter hour conclusion, Wawrinka had 92 winners to Gasquet’s 57—approaching 40 percent of the total points played. And perhaps that proved to be the decisive statistic: Wawrinka won, 8-6.

The reward for such effort, courage and quality was the most unenviable in tennis: seven-time champion Nadal. But no-one ever said life was fair.