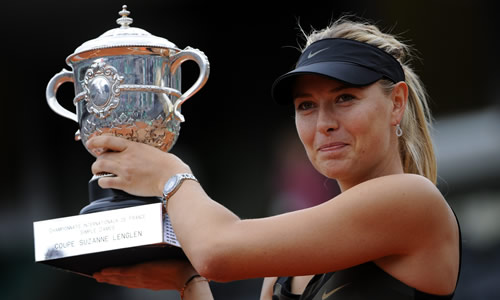 Roland Garros may boast only two previous champions in the men’s draw—dominated by the favourite for this year’s title Rafael Nadal—but of the many French Open champions over the last decade on the women’s side, there are no fewer than seven playing in the 2013 draw.

Last year’s winner is the No2 seed, Maria Sharapova. Before her came Na Li, currently No6, Ana Ivanovic, now No14, while former winners Francesca Schiavone and Svetlana Kuznetsova keep each other company at Nos 38 and 39. For good measure, two recent runners-up are also in the top 10: Sam Stosur and Sara Errani.

But the eldest of them all, winning the Suzanne Lenglen trophy a full 11 years ago, is Serena Williams, and though she may not have won in Paris since, her powers as she begins her campaign this year appear undiminished.

In 2013, she comes to Roland Garros with a career-best winning streak of 24 matches, including the last 16 on clay—Miami to Charleston to Madrid to Rome—and she even fitted in two Fed Cup wins on hard courts in the middle of her clay streak. Indeed she has lost just two matches in a glittering 38-match season.

Apparently fitter and healthier than ever, there is no doubt that Williams means business. She won Rome last week—incidentally dropping just 14 games in five matches—for the first time since 2002, the year she went on to win her first French title. And in truth, it is hard to see her not doing precisely the same in 2013.

But while Williams may, at the age of 31, be the one to beat, she is one of a powerful trio that has between them, in the last 12 months, won all the Grand Slams and Premier Mandatories and also shared the No1 ranking. The trio now occupies the top three: Williams at No1, with defending French champion Maria Sharapova at No2 and Australian Open champion Victoria Azarenka at No3.

Each has won only two matches against Williams, none of them on clay. Serena, for her part, has won 12 against Azarenka and 13 against Sharapova.

So when the draw was made, the big question was very much the same as for the men’s side. There, the question was whether Nadal would line up in the same half as Federer or Djokovic. Here, it was whether Azarenka would fall in Williams’ half or in the altogether more positive Sharapova half, where she has a favourable 7-5 head-to-head.

The No3 from Belarus no doubt let out a sigh of relief when hers was the second name drawn from the trophy by Nadal: Instead of a Williams semi-final, she faced the prospect of one against Sharapova.

For Williams too this is a good draw. Azarenka, despite a head-to-head weighted heavily in the American’s favour, is one of only two women to beat her in 2013, on Doha’s hard courts.

The other, fellow American Sloane Stephens, took advantage of a below-par Williams in the quarters of the Australian Open—and she is in Sharapova’s eighth.

Yet since 2003—a semi finish—Williams has not got beyond the quarters at Roland Garros. Last year was her worst ever result, a first-round loss to Frenchwoman Virginie Razzano. She will no doubt be highly focused in trying to fend off Anna Tatishvili who, until this week’s two wins in Strasbourg, has not won a match since January.

There seems to be nothing—short of a huge upset—that can disrupt Williams’ progress to the semis: The fourth round may bring Roberta Vinci or Anastasia Pavlyuchenkova, newly coached by Martina Hingis, and the quarters Caroline Woznicki or Angelique Kerber—each of whom beat her once last year on hard courts. But such has been the recent form of Wozniacki that her first-round opponent, the giant-killing Briton Laura Robson, may cause one of her now-common upsets. Meanwhile Kerber sustained an abdominal injury in Rome so her condition is uncertain.

The popular Pole made a real impression on Wimbledon and on Williams in her first Grand Slam final last year but has not enjoyed the best of form this season since winning the first two events in the pre-Australian Open swing.

With losses to Williams, Azarenka, Li, Petra Kvitova and, more recently, Robson and qualifier Simona Halep, she may find the going tough against the likes of former French champion Ivanovic in the fourth round—and possibly her sister Urszula or Venus Williams in the third.

Looking towards the quarters, she may face last year’s finalist, Errani, who is enjoying a new career-high ranking of No5 on the back of semi finishes in Madrid and Rome.

Radwanska’s first big test is a meeting with Sabine Lisicki, who has started to put together some useful wins this season after extended absences with injury: That could be one of the most intriguing match-ups of the third round.

The petite Spanish woman, Carla Suarez Navarro, is also in this eighth, and could face Nadia Petrova for the second successive week: Navarro won in a tight three sets in Rome, and has shown some good form on clay this season.

Azarenka’s best results in Paris so far have been two quarter-finals, with her big successes this year, just as last, have come on hard courts, boasting titles in Australian and Doha. But in Rome, she showed new resolve in adapting to clay with the impressive scalps of two French Open finalists in Stosur and Errani.

Her first opponent is the talented and unpredictable Elena Vesnina, only just outside the seedings and a titlist at the start of the year in Hobart.

Azarenka’s fourth-round opponent could be Marion Bartoli, also unpredictable and with three wins from their last five meetings. However her form this season has been unremarkable, and she faces the rising Belgian Kirsten Flipkens first.

This section holds perhaps the most enticing quarter-final, pitching Azarenka against her final opponent at the Australian Open, Li. Until the Chinese woman fell with a buckled ankle, she led the Belarusian, and after a second fall, she lost in three sets. Their three meetings in 2012 were also very close—and Li’s record on clay is certainly the superior one.

However, Li’s route is not easy, though her scheduled fourth-round opponent, Maria Kirilenko, retired with knee problems in Rome.

Also in this section is Briton Heather Watson, playing for the first time since her diagnosis of glandular fever in Miami. She is drawn against Swiss Stefanie Voegele, who she beat in Paris in 2011 but who got the better of Watson in Memphis this February. The Briton’s first seed could be No23 Klara Zakopalova, with Kirilenko next and Li in the fourth round.

Alarm bells rang when Sharapova pulled out of Rome ahead of her quarter-final with illness. But the news from Paris is that she has been training hard there since Tuesday: All seems well for the defending champion.

She opens against Hsieh Su-Wei, not the easiest of first matches, before moving on to Eugenie Bouchard or Tsvetana Pironkova and a possible first seed in the shape of Tamira Paszek. All can be dangerous on a good day, but such is the form of Sharapova this year that she should have no trouble.

Whether Stephens or Dominika Cibulkova can ruffle the calm waters is also doubtful, though again, both could take advantage if Sharapova has an off day.

It is the other half of this quarter where big battles seems to lie, with an in-form Jelena Jankovic, winner in Charleston, quarter-finals in Rome and three times a Roland Garros semi-finalist—pitched against Stosur, twice a semi-finalist and the 2010 losing finalist. Both reached the quarters in Rome last week, but that 2010 run to the finals of Paris by Stosur was a rare win over the Serb.

Whoever wins, they then have the prospect of Kvitova—though Stosur scored her only win over the Czech in Rome last week.

With Daniela Hantuchova and Yanina Wickmayer unseeded in this eighth as well, it is a taxing section.

Briton Elena Baltacha, with a protected ranking after foot surgery, returns to main-draw action against Marina Erakovic, followed by No16 Cibulkova and possibly No17 Stephens, in the Sharapova eighth.