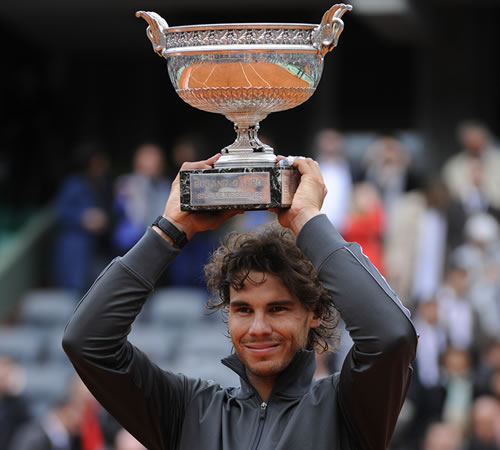 The last couple of months have seen the ATP Tour visit the burnt orange courts of some of the most glamorous venues in the world.

There have been coast-clinging, sun-drenched tournaments in Monte Carlo and Nice, Barcelona and Estoril. Scattered amongst them have been picture-book cities in the heart of Europe—Bucharest, Munich and Dusseldorf.

And the clay-filled season is packed not just with wonderful vistas and the smell of jasmine. It is packed with ranking points, too, from the first Masters in Monaco to the high plateau of Madrid and thence the last red-dirt Masters in Rome.

For those who stay the course, it can be a heady and lucrative ascent toward the golden prize at its climax: the French Open. Two Tommys, the 30-somethings Haas and Robredo, made the journey back from injury and the outer ranks to win in Munich and Casablanca. It grabbed the No32 seeding in Paris for Robredo, while Haas won a valuable top-16 spot.

The Portugal Open winner Stan Wawrinka broke the top dozen while Lukas Rosol, with Bucharest, reached a career-high No33.

Younger talents have ridden decent waves of form, too: Ernests Gulbis made an impact in Barcelona and Rome to reach 39, his highest in more than two years; Benoit Paire will enjoy seeded status in a Major the for the first time after his semi finish in Rome; Jerzy Janowicz, at 23, will enjoy the same advantage.

And edging near the business end of the rankings, Richard Gasquet is up to his highest level in five years, and the reward of a prized top-eight ranking.

But it is above Gasquet where the most attention has been focuses. Rafael Nadal missed the last two Grand Slams with his knee problems. He made his return to the surface over which he has held sway since the ground-breaking 2005 when the teenage Spaniard won 11 titles, including Acapulco, Monte Carlo, Barcelona, Rome and Roland Garros.

Since then, Nadal has won seven more in Monaco and Barcelona, six more at Roland Garros and Rome, and this season’s surge has taken him from No5 in the rankings to No4 in time for the 2013 seedings—and so out of the path of the No1 and 2 seeds, Novak Djokovic and Roger Federer, in the quarter-finals.

But what may have been a kick in the teeth to the man Nadal supplanted at No4, David Ferrer, has been alleviated by the withdrawal of world No2 Andy Murray, missing with a back injury.

Murray, who won the US Open last year, is one of only two active players in the last decade to have denied Nadal, Djokovic and Federer a Grand Slam—the trio accounts for 30 of the last 32 Majors. And by unhappy coincidence, the other, world No7 Juan Martin del Potro, is also missing with illness.

So with Murray and del Potro absent, could it be one of the persistent top-10 challengers, Ferrer, Tomas Berdych or Jo-Wilfried Tsonga, who upsets the ‘old order’. Or perhaps one of the young guns will step up to the plate.

Then again, perhaps Federer, the only man in the draw not named Nadal to have won the French Open, will prove that his seven weeks away from competition honing his fitness and game, was the perfect preparation for Paris.

Or has Djokovic timed his preparation for the only Major missing from his resume just right? Or will it, as usual, be Nadal who holds the Coupe de Mousquetaires on the last day of clay?

Top seed Djokovic has had his eyes firmly set on Roland Garros since this time last year when he missed making history by the smallest of margins. He came to Paris as holder of the other three Slams and so was aiming to become the first man since Rod Laver in 1969 to hold all four Majors simultaneously—something neither Federer nor Nadal has managed to do. Djokovic reached the final for the first time in his career but was deprived by Nadal.

With Nadal drawn in the Djokovic half, that final cannot be repeated in 2013, though it was played out in the Monte Carlo final in April—and Djokovic won.

The Serb has had a light playing schedule since—partly caused by an ankle problem—so should be fresh for the rigours of Grand Slam tennis and a favourite for the title if he can get past Nadal again—and it is worth noting that Nadal has played 15 straight matches for three titles since Monte Carlo.

But Djokovic’s biggest challenge before that can be played out is a possible third-round meet with No26 seed Grigor Dimitrov, who beat Djokovic in his Madrid opener. The young Bulgarian has been one of the fastest risers of the season, maturing and improving before the world’s eyes.

Beyond that, Djokovic can meet No22 seed Alexandr Dolgopolov, who he beat with ease in Rome—though the Ukrainian took the first set from Djokovic at their previous meeting in Monte Carlo last year—or No16 Philipp Kohlschreiber. The German, by chance, beat Djokovic in their only previous clay meeting, at Roland Garros in 2009, but although Kohlschreiber is close to his career high, he has had a patchy few weeks of withdrawals so his form is hard to gauge.

The Djokovic quarter offers Janko Tipsarevic and Mikhail Youzhny—who has scored some strong wins in recent weeks, including one over Haas in Madrid. Haas, who was struck down with illness in Dusseldorf last week, is another contender in this segment, along with John Isner.

Nadal has suffered just two losses on clay this season, in the final of his first tournament after that seven-month absence, and to Djokovic in Monte Carlo. He has since taken back-to-back titles in Barcelona, Madrid and Rome.

He comes to Paris with a 52-1 record, and certainly looks safe until beyond the third round, meeting first Daniel Brands, then Michael Russell or a qualifier, followed by Fabio Fognini, who he took down, 6-1, 6-3, in Rome. There is one interesting alternative scenario if Rosol, who missed a seeding by a hair’s breadth, beats Fognini: A first meeting with Nadal since the Czech took a dramatic five-set victory at Wimbledon.

Nadal’s fourth round may bring No13 Kei Nishikori or Paire, who just reached the semis in Rome. There are some interesting contenders for the quarter-final stage, too, with No7 seed Gasquet, No9 Wawrinka and Janowicz, all enjoying good seasons.

As well as beating Murray in Monte Carlo, Wawrinka’s Estoril and Madrid run saw him beat the likes of Ferrer, Tsonga and Berdych, and play 10 matches in 12 days before pulling out of Rome with a thigh strain. If he can get past Janowicz in the third round, he could be looking at only his third Slam quarter-final and his first in Paris.

Ferrer may have been displaced by Nadal in the top four, but in the absence of Murray, he heads his own quarter for his third consecutive Slam. This time, he avoids Nadal in his half—he drew his nemesis in the quarters of both Rome and Madrid—so has a decent chance of reaching his sixth straight Slam quarter-final and perhaps his fourth semi out of the last five.

He sits in a Spanish-filled first segment, his first seed being No31 Marcel Granollers. The fourth round becomes tougher, holding most likely the winner between Milos Raonic and Kevin Anderson, who beat him in Indian Wells this spring. The big South African is at a career high and has proven some clay credentials with wins over Juan Monaco and Marin Cilic in recent weeks.

Ferrer’s biggest test comes in the quarters with fifth seed Berdych, a semi-finalist three years ago but with some formidable early rounds here: Gael Monfils, on home soil and finding his way back after injury at the start of the year, then the firebrand Gulbis, who beat Berdych at Wimbledon last year in three tie-breakers.

But Berdych continues to add to his fitness, game and consistency, now scoring regularly over the top players: Djokovic in Rome, Murray in Madrid, Federer in Dubai. Even so, he has had only limited success against Ferrer—three wins to six losses. He also faces a sequence of other Spaniards who could upset the apple cart after those tough openers: Robredo and Nicolas Almagro.

Federer may feel he has more to prove in Roland Garros than do his big rivals, for he finds himself in a very rare position. For the first time this century, he plays the French Open without already winning a title this season.

But after an intense and highly successful 2012, the 31-year-old elected to trim his pre-clay season to work on fitness and tactics as well as spending time on extra-curriculars such as his foundation and family. It also came at the right time to heal a back injury he sustained during Indian Wells.

He looked a little rusty at his first outing in Madrid, but in Rome there was more consistency and some great passages of play against the fearless young talents of Janowicz and Paire. Then Nadal picked him apart in the final, but not before Federer showed a slightly different hand—offensive tactics and some aggressive though error-strewn play.

Five times Federer has been thwarted by Nadal at Roland Garros, four times in finals, but with Nadal drawn in the top half, it could be another final between the two rivals.

As well as avoiding Nadal in the semis, Federer has been fortunate in his openers—qualifiers in the first two rounds. But next is a possible trip-wire—Julien Benneteau is only seeded 31 but has caused Federer real problems in their six-match history, winning in the Paris Masters and, this February, in Rotterdam. Benneteau was also two sets up at Wimbledon last year before Federer pulled out a five-set win.

By chance, Federer could face another antagonistic Frenchman in the fourth round: Gilles Simon has also beaten Federer twice in their six meets, and also took him to five sets in Grand Slam play, at the 2011 Australian Open. He did, though, lose heavily to Federer in Rome last week—and in any case faces the terrier that is Lleyton Hewitt in the first round, so could make an early exit.

Federer’s quarter-final opponent will be, on paper, yet another Frenchman with cause to be optimistic. In Australia this year, Tsonga lost 6-3 in the fifth set in the quarters, and beat Federer 6-4 in the final set at Wimbledon in 2011.

Tsonga should be reasonably content with his early rounds, too: seeds include Jeremy Chardy, Juan Monaco and Cilic.