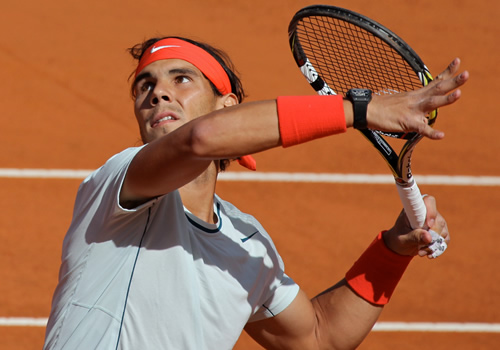 Despite rain, cold wind, and the absence of two of the biggest names in the men’s game, Andy Murray and Juan Martin del Potro, the home crowd in Paris have had plenty to cheer them in the first week at Roland Garros.

But the French fleet has to take second place to the Spanish armada when it comes to breadth, depth and top-notch achievement.

Spain’s men have long dominated the tour: 13 top-100 players, five seeds among 16 in the Roland Garros draw—four more than France after wild cards are taken into account.

And the variety—of playing style, of personality, of age, of profile—is, it seems, without bounds.

There are the clay-court journeymen such as 32-year-old Albert Montanes, winning his first title in three years in Nice this week but never reaching a final on anything but the red dirt. There’s Marcel Granollers, with an outstanding record in doubles but breaking into the singles top-20 for the first time last summer and seeded 31 this week.

No11 seed, Nicolas Almagro has won all 12 titles on clay yet is also the season leader in aces: 338 of them ahead of Paris. Three-times a quarter-finalist at Roland Garros, he lost to Rafael Nadal on each occasion.

Spain also has a disproportionate number of left-handers, four out the 13: Former No7 but now unseeded, Fernando Verdasco came close to beating No8 seed Janko Tipsarevic in the second round here, before losing 8-6 in the fifth. His good friend, Feliciano Lopez—a serve-and-volley exponent who wields a single-handed backhand—reached a career-high No15 last year, but lost to fellow 31-year-old Ferrer in the third round.

Perhaps the most heart-warming story has been the renaissance of another 31-year-old, Tommy Robredo. World No5 seven years ago, he missed the last two French Opens after playing 10 consecutive years to reach four quarter-finals.

After leg surgery, he dropped to 471 a year ago, but broke back into the top 100 in February. He fell to Ferrer in Buenos Aires, won in Casablanca, and beat Tomas Berdych on the way to the Barcelona quarters. His improving form edged him tantalisingly close to a Roland Garros seeding, and he made the cut of No32 courtesy of the Murray-del Potro absence.

Of his success, he commented: “The goal is to arrive in Roland Garros in the best form possible. After that, I will sit down and have a look at my goals.”

Well, the form has indeed continued, with this slender, elegant player taking five sets to reach the third round and another five, from two sets down and facing match points, to beat Monfils. His reward? The bigger, stronger and younger single-handed backhand of fellow Spaniard Almagro.

Robredo has lost all five of their previous matches, including this year’s in Acapulco. Beyond that could lie the yet more daunting Ferrer in the quarters—surely a barrier to the semis yet again for Robredo.

For in Ferrer, he finds the ultimate competitor but also an encouraging lesson: that the best may be yet to come. Ferrer reached his first French Open semi-final after turning 30 last year, then his first Wimbledon quarter-final, his second US Open semi and the same in Australia, taking his first Masters title along the way. With Nadal absent, it also took Ferrer to the top of the Spanish rankings for the first time in his career, and back to No4 for the first time in five years.

He is seeded in his own quarter in Paris, has seen his biggest obstacle Berdych go out, and has quietly advanced to the fourth round without dropping a set. Scoring his 100th Grand Slam match-win along the way, he looks ready to reach yet another Major semi—though faces, in Kevin Anderson, the man who beat him in Indian Wells this year.

Yet despite Ferrer’s durability, work-ethic, and remarkable achievements on a tennis court—bringing fresh weapons to his game even now—he remains constantly under the radar. That is due, in part, to his self-effacing character: He is quietly spoken off court and has a head-down, no-fuss attitude on court. But it is also due to the shadow cast by his illustrious compatriot, Nadal.

Take their first Friday at Roland Garros. Ferrer, yet to play on Philippe Chatrier despite his No4 ranking, earned a single closing line in the report of Richard Gasquet’s uneventful win:

“Fourth-seeded Spaniard David Ferrer was equally expeditious, defeating compatriot Feliciano Lopez 6-1, 7-5, 6-4.” While on the ATP news pages, he was a mere three-line footnote to one of the day’s many reports.

Nadal, though, has had star quality from the moment he burst onto the senior tour. Barely 18, and a burnished bundle of muscle with poster-boy looks, he began winning almost a decade ago. He has gone on to claim perhaps the finest clay record in tennis history—41 titles, seven of them at Roland Garros—and has come to Paris with 33 wins out of 35 on clay this season, despite returning in February after seven months away with knee problems.

Despite his No3 seeding, and being drawn in the Djokovic half, Nadal remains most punters’ favourite for an eighth French title. After all, he has lost only one match, to Robin Soderling in 2009, in his entire Roland Garros career.

But if his extraordinary record produced column-inches of copy before the tournament began, his less-than-perfect start made still more. Since 2007, Nadal has lost only five sets on the way to five titles, but in his opening two matches this year, he lost the first set in both. Indeed in his opener, Daniel Brands led by a set and 3-0 in the tie-break before Nadal found his all-consuming clay tennis to storm to a win.

Nadal explained it thus: “He was trying to hit every ball as hard as he can. From the first ball, there was not one ball I felt I had time to prepare for.”

And things got worse, as the cold and damp conditions kept the speed and spring of his top-spin within range of his opponents. Nadal’s concerns were sharpened further when his second match was postponed by rain. That forced him to play back-to-back days against, in this third opponent Fabio Fognini, a man who had played a day earlier. If Nadal needed any more headlines, his anger was guaranteed to get them:

“I cannot play third after men’s and girls when my possible opponents play second after girls. That’s not fair. And today I was playing almost three hours on court and my opponent was watching the TV in the locker room. So if you tell me that’s fair, I say that’s not fair.”

He seemed to carry that irritation onto court, too. He made uncharacteristic errors in trying to stem the charismatic play of Fognini, who he had beaten with ease a fortnight before on the hot, dry courts of Rome.

Seeded here for the first time in a Grand Slam, at No27, Fognini is flamboyant in both character and tennis, and time and again fired winners past Nadal. He broke in the fifth game, taking bold mid-air swings and making outright backhand cross-court winners.

But the Italian’s attacking game brought almost as many errors as winners, enough for Nadal to break back. Fognini still excelled, breaking again to serve for the set at 6-5, but with his error count up to 28, he gave the break back and Nadal edged the tie-break, 7-5, and the set.

As the court dried and the sun came out, Nadal found greater rhythm and looked more comfortable, while Fognini captivated the crowd with some of the most entertaining shot-making of the week, smiling with sheer delight at the sport. Nadal, though, began to contain the flair and pace and earned an increasing numbers of break points. He served for the second set, 6-4, though survived three break points to do so.

With Nadal now playing closer to his best, Fognini was broken in the first game of the third set and could no longer contain the champion, who rushed to a 5-1 lead. Fognini managed a break back to narrow the gap, but Nadal served out the match, 6-4.

So Nadal ended the week looking and playing much happier than he had started it. He will, rightly so, continue to be the star of the Spanish armada, a player able to take adversity, look it in the eye, and beat it.

But look out for his exciting Italian opponent in tomorrow’s headlines—and spare a few for Nadal’s many worthy compatriots.