French Open 2013: Roger Federer beats Julien Benneteau of France in straight sets to reach the fourth round at Roland Garros 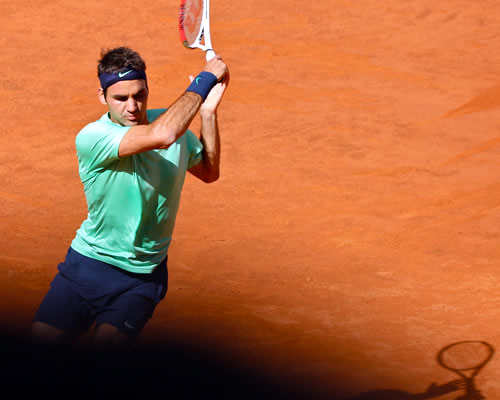 Roland Garros may have been burdened by troublesome weather as the French Open tried to complete its bulging first two rounds, but in one element at least, the home nation has revelled in sunshine.

France, when it comes to strength in depth, is one of the few countries to match Spain on the men’s tour: 12 in the top 100 and no fewer than six seeds in the Roland Garros draw. What’s more, all six advanced to the third round—plus one more, perhaps the most charismatic entertainer in the Gallic pack, Gael Monfils.

Richard Gasquet, seeded No7, sailed through both opening matches with ease, building on one of his best seasons since he burst on the scene as a teenager to beat then No1 Roger Federer in Monte Carlo.

Already with two titles this year, Gasquet is at his highest ranking in five years, thus earning of his own eighth in the draw.

He was asked, after dropping just six games in his second match, whether he felt burdened by the pressure for a first home winner at Roland Garros since that of Yannick Noah 30 years ago. He was typically self-effacing: “Nobody is expecting me to win the tournament, so no. There are a lot of good French players, but we are not the favourites.”

There are a few who may take issue with his view. Watching the spell-binding tennis of Monfils, who came here with a win in the Bordeaux Challenger backed up by the final in Nice, the chief question-mark was consistency: Could he maintain the quality and form that took him through No5 seed Tomas Berdych and talented firebrand Ernests Gulbis? If so, he may just replace scheduled semi-finalist, David Ferrer.

And should Monfils make that semi, he was in with a chance of meeting one of no fewer than four French seeds in the bottom quarter, including the highest ranked of their nation, Jo-Wilfried Tsonga.

Each of the four, though, would have one major barrier to such a semi, the No2 seed Federer. The Swiss, playing his 15th French Open, is five-times a finalist and winner in 2009. His record over the years on clay is better than almost any man’s except the one who thwarted him in those other four finals, Rafael Nadal.

But although Federer arrived in Roland Garros on the back of a final in Rome, and with plenty of gas in the tank after an extended break spring break, he faced serious problems in the Gallic line-up.

In the fourth round lay Gilles Simon, who had beaten the Swiss twice in their six meets, and took him to five sets in Grand Slam play at the 2011 Australian Open.

Federer’s scheduled quarter-final opponent could be Tsonga, who on paper also had cause to be optimistic. The all-court flair of Tsonga took the Swiss to five action-packed sets in the Australian Open quarter-finals this year, though he lost 6-3 in the fifth. And going back to 2011, Tsonga scored a shock defeat over Federer at Wimbledon, 6-4 in the final set.

But the first French trip-wire came in the shape of Julien Benneteau. Though the lowest ranked of the French seeds, No31, he had caused Federer real problems in their six-match history. He won at the Paris Masters in 2009 and again this February in Rotterdam. More impressively, Benneteau went two sets up at Wimbledon last year before Federer pulled out a five-set win.

To the Swiss advantage this time was how little time he had wasted in his first two matches, dropping just 11 games in a stream-lined six sets. Benneteau, like Federer aged 31, had played two long matches totalling seven and a half hours. But Federer was alert to the danger:

“It’s true when I play against him he makes it difficult for me. I have some problems and I have to find a solution. Anyway, I like that kind of challenge. He doesn’t need to change his game, so it’s up to me to see what didn’t work and to see how I can change it.”

But he added: “We [haven’t] played often on clay”—no doubt fully aware that their single clay match went his way!

In the first couple of games, it looked as though Federer had failed to find the answer, suffering an opening break of serve as balls flew long or found the net—and the next game was not much better, with the Benneteau angled forehand and strong serve out-foxing the Swiss. The Frenchman led 2-0.

It seemingly took Federer a few games to warm up in the cold, brisk conditions, but that done, he broke Benneteau back in the fourth game, and put in two love holds of serve as his forehand found its range and angle. Then he broke to love with a searing down-the-line backhand winner and served out to love, 6-3. Despite the poor start, he ended the set with almost twice as many points as his opponent.

Although Benneteau looked weary at the end of the first set, he revived in the second, serving at an impressive 89 percent and working a break point in the fourth game. He could not convert, but with the benefit of serving first, held the slight lead through to 4-4.

But then Federer struck. One forehand winner, short and whipped, passed Benneteau down the forehand line, the next, a top-spin arrow, passed him down the backhand line. Federer sealed the deal to love with a backhand pick-up at full stretch that angled itself down at Benneteau’s feet. After precisely an hour, Federer served out the set to love, 6-4.

The third set followed a very similar pattern and rhythm: If anything, Benneteau played even more consistently, dropping only four points on his first serve, which was still up at almost 80 percent. With both happy to glide to the net, the points were short, lively and varied. Neither man looked in danger of breaking—until the last moment.

When it came, there was an inevitability that the packed stadium picked up immediately, and the chanting grew. Federer cracked two winners to lead 30-0 on Benneteau’s serve and, in the blink of an eye, broke with a backhand winner down the line.

It was the work of moments to serve out the match to love, 7-5, bringing Federer’s tally of winners to 38 against 21 errors—his third consecutive hour-and-a-half match and just one match short of his 900th win.

Federer was not the only man passing milestones. His possible semi-final opponent Ferrer notched up his 100th Grand Slam match-win in straight sets over fellow Spaniard Feliciano Lopez.

On the other side of the draw Nadal dropped the first set before advancing to the third round—and is scheduled perhaps to face his own French challenge of Benoit Paire in the fourth round and then Gasquet in the quarters—though Gasquet’s run is a tough one: first a surging Nikolay Davydenko, who has yet to drop a set, then either in-form Stan Wawrinka or Jerzy Janowicz.

But with both Monfils and Simon forced into a fifth set at the fag end of the day’s play, it would take a while for Federer to find out just how many more Frenchman lay in his own path.