French Open 2013: Roger Federer battles past Gilles Simon in five sets to set up a quarter-final against Jo-Wilfried Tsonga 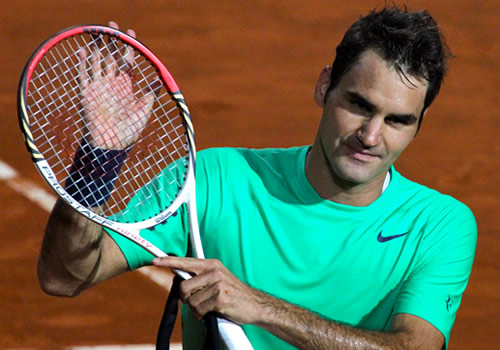 The contenders for the quarter-finals of the 2013 French Open began to take on the look of a bygone age as the draw unfolded towards end of the first week.

The single-handed backhand was cutting a swathe through matches so that, even with the loss of Feliciano Lopez and Grigor Dimitrov in Round 3, there remained eight one-handed weapons among the final 16.

And along the way, many of the 16 were reaching milestones with every day that passed—and that was aside from the ultimate prize in the sights of seven-time champion Rafael Nadal: As one of the final 16, he is still on track to become the first man to win eight titles at the same Grand Slam.

Three men were bidding to reach the quarters of the French Open for the first time: Gilles Simon, Kevin Anderson and Viktor Troicki—and for the latter pair it would be their first ever Major quarter-final.

Novak Djokovic reached his 500th match-win in reaching Round 4, while David Ferrer became the 39th man in history to record 100 Grand Slam victories. The Spaniard, since making his debut at the 2003 Australian Open, has played 42 consecutive Grand Slams—the seventh-longest Open era streak.

A world No2 a decade ago, Tommy Haas reached the fourth round of a Major for the first time since 2009, when he reached the Wimbledon semis.

Last year, ranked outside the top 100, he had to qualify for Roland Garros. This year, he is on the verge of returning to the top 10. What’s more, the oldest man of the 16, aged 35, saved one match point and eventually converted his own 13th match point in beating John Isner, 10-8 in the final set.

But it was another Tommy, the slender, elegant, understated Robredo, who was capturing more hearts at Roland Garros with each match he played.

A four-time Roland Garros quarter-finalist, Robredo was world No5 almost seven years ago, but was now playing in Paris for the first time in three years after leg surgery. He proved to be the Houdini of 2013.

In Rounds 2 and 3, Robredo came back to win against Igor Sijsling and Gael Monfils after losing the first two sets, saving four match points in the latter. Even in normal circumstances, this would be a remarkable run for a 31-year-old, but a year ago, knocked by his injury, he fell to No471. He did not break back into the top 100 until February this year, then won the Casablanca title, and scored enough further wins to play in Paris as the No32 seed.

Yet his two previous matches were just the start. Robredo took on compatriot Nicolas Almagro in Round 4, went down 5-7, 3-6, won the next two sets, 6-4, 6-4, and came back from a break down to take the fifth, 6-4. And that equalled a record that had stood since 1927, and by one of Paris’s great heroes. Henri Cochet, one of the famous ‘Four Musketeers’ in the late 1920s and early 1930s, was the only man in Grand Slam history to come back from two sets to love down in three consecutive matches. He did it at Wimbledon: Robredo had now done it at Roland Garros.

Little wonder, perhaps, that this normally restrained player had the Suzanne Lenglen crowd at his feet. With one small raise of his right hand, at break point in the ninth game of the final set, they roared him on—and gave him a standing ovation as he served out the match, 6-4.

It took a moment for the enormity of his achievement to sink in. First he sank to his haunches, then bowed his head to the court as the tears came. If there was a dry eye at Roland Garros, it belonged to a heart of steel.

So Robredo’s achievements set the scene perfectly for what had the makings of the record of the day, perhaps of the week.

For the most enduring of the men at Roland Garros, Roger Federer, was in pursuit of his 900th match win, his 36th consecutive Grand Slam quarter-final, his 40th overall.

But the run of 35 needs some context. Only five other men have even played the last 35 Grand Slams, let alone reached the quarters of all of them: Feliciano Lopez—45, David Ferrer—42, Fernando Verdasco—40, Tomas Berdych—39, and Albert Montanes—36. The last time Federer fell before the quarters was at this very tournament in 2004.

Even so, there were Grand Slam stats—as there invariably are—for the Federer record-book:

– This was his 15th successive French Open, more than any other active player;

– This was his 54th consecutive Grand Slam, joint second with Stefan Edberg;

– And while Nadal may have the all-time record for titles in Paris, Federer could become the leading performer in Roland Garros history. His current 57 wins trailed only Guillermo Vilas and Nicola Pietrangeli, each with 58. Should Nadal take his eighth title, the record could be his, but if Federer reached the semis, the Swiss would take an unassailable lead of 60 wins.

But that lay in the second week. For the moment, Federer had Simon and No900 in his sights. And it was a far-from-straightforward prospect. The resilient Frenchman won their first two matches, in 2008, and took Federer to five sets at the Australian Open in 2011 before Federer sealed the win. However in their only other completed match, a month ago in Rome, Federer lost just three games.

And Simon had taken a tougher route to this latest contest, twice taking five sets to win—against Lleyton Hewitt and Sam Querrey.

Sure enough, Simon looked in the first set as though he was in for a repeat of his Rome battering, though the tennis was not as one-sided as the 6-1 scoreline to Federer appeared. But thereafter, Simon—the archetype of the back-board player, able to run for hours as he feeds off the pace of his opponent—changed things up in the second, playing offensively, aggressively, and pounding away at the Federer backhand. He even followed his forehands into the net to take time away from the Swiss.

Federer just about contained Simon’s flat, accurate hitting until he fell heavily as he lunged to the backhand wing. Only in the replay was it possible to see the problem—a tweaked right ankle and a jolted landing on knees and hands.

He was quickly up and carried on, but first he double faulted, then could not reach a forehand winner from Simon: It was a break, both in rhythm and games.

The Frenchman, with a real spring in his step, served out the set 6-4, and he was not done. Federer appeared to be moving well, but was constantly put on the back foot from the placement and pace of Simon’s shots. The Swiss netted forehands, missed first serves, and Simon broke not once but twice to take the third set, 6-2.

No surprise then that Federer began to urge himself on with almost every point. He found himself at 30-30 on his opening serve, and threw himself into a couple of aggressive net points to hold. He fist-pumped, the crowd roared encouragement, and he responded: He in turn broke twice for a 6-2 set. It would all come down to a fifth—and it was a nail-biter to the bitter end.

Federer fist-pumped, growled “c’mon”, found another gear. He held to love twice, breaking Simon en route to a 3-0 lead, but that was not the end. Simon, despite the bulk of his home crowd chanting Federer’s name, rose to the challenge, roared his way to a gutsy hold at 5-3, and then earned two break points as Federer served for the set—but the record-book insisted on satisfaction. The Swiss held for one of the most hard-earned quarter-final places of his career, 6-3.

The two men embraced warmly, smiled generously, took the ovations of the crowd. Federer said, in French of course: “I think I lost some confidence when I fell down: I didn’t want to go back home too soon.”

And he has not: He takes the 900th match-win and 36th straight Grand Slam quarter-final, but can look forward to another huge challenge against Jo-Wilfried Tsonga, who took him to five tough sets in the last Major, in Melbourne. The winner will take on another 31-year-old, either Ferrer or Robredo.

So veterans and single-handed backhands still populate the bottom-half quarters, and the top half is guaranteed to do the same. The question will be: how many?