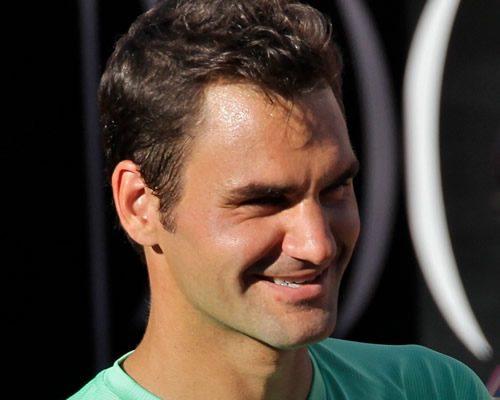 Roger Federer has rarely been a man for one-word answers, rarely been short of an opinion, and rarely been caught off guard by a question—and even when he has, it takes a pause, a rhetorical holding question, and he’s back on track.

He is, without doubt, a PR gift in every medium—articulate, self-assured, and generous in his obligations: He must rue the day, many years ago, when he agreed to hold news conferences in English, French and German.

But Federer also worked out, many years ago, that good PR is a great tool in the right hands and, as a result, helped set the standard that all players now follow. The top men and women in tennis are global stars capable of filling vast column inches and broadcast hours. They can single-handedly ‘put bums on seats’ anywhere in the world, and such pulling-power generates income and draws fresh blood to the sport.

The equation is simple: You pat my back and I’ll pat yours.

In Federer, of course, tennis is fortunate in both message and messenger. He not only has a sound PR head on his shoulders—and the PR skills to work the message—but also happens to be the most successful tennis player of his era. And from early on, he also involved himself in tennis from the inside, helped perhaps by the Swiss gift for negotiation and diplomacy, when to speak out or keep one’s counsel.

Many times he is asked about discussions between the Players’ Council—he is, not surprisingly, the President—and the governing bodies, and invariably delivers the same response: What’s behind closed doors stays behind closed doors. But when the time is right, he speaks up.

After the US Open was again delayed by rain last year: “This is the fourth year in a row I think we’re playing a Monday final. Might as well make it a Monday final, right?…Or you have to change up a few things. I think the [three-day] first round is not working and ‘Super Saturday’ is not feasible…without the roof, I just don’t think Saturday/Sunday is feasible any longer.”

The USTA has now changed its schedule.

On dope testing, he commented at the World Tour Finals in London: “I feel I’m being less tested now than six, seven, eight years ago. I don’t know the exact reasons we are being tested less. I think it’s important to have enough tests out there.”

He added in February: “I didn’t get tested after the semi-final in Australia, which I told the people: To me that is a big surprise… we should be doing biological blood passports, I think we should store things away, I think that would scare a lot of cheaters away.”

He has put critics right about fellow players and rivals. On being drawn on the opposite side of the French Open line-up from Rafael Nadal: “It’s not important at all to be honest. That’s just more fuss than anything else. I just focus on what I have to do. Rafa does the same. The rest is just buzz around the whole situation.”

And he has been frank about his own challenges: “I’m in a different situation than them: They are right in their prime 22—27, 28. It’s challenging, exciting, making the right decisions in my personal life right now. I have family, not many of the other guys have that. I have many more things to worry about than they do.”

And as he resumed duty at his 15th consecutive Roland Garros, his 54th consecutive Grand Slam, it seemed there could be few surprises left in the Federer locker. As usual, he had a milestone on the horizon—this one a 900th match win, which he will tick off if he continues his unbroken stretch of Major quarter-finals to 36. But here, as on countless previous occasions, he has managed to make headlines with a timely surprise, a timely turn of phrase.

He did last week in Rome, arriving for his first match with his signature curls of almost a decade replaced by a short-cropped, near unrecognisable Swiss.

He swept into one news conference like a teenager, threatening some karaoke as the music cranked up outside. Two days later, he was far from frivolous in challenging some gossip on Twitter.

The thrust of the tweets concerned the speed of Federer’s serve: “Well if you’re serving wide with a slice, it’s totally normal But who’s talking? Twitter world, what is this, a 1000 people? I’m not Gulbis or Janowicz serving 225 wide. I need to work my points differently. I don’t know if these people have never seen me play before, but they should know. Ask Rafa if he thought I served slower… and he’ll silent the Twitter world.”

Federer has long been resistant to joining the Twitter community, preferring to communicate with fans via the most ‘liked’ Facebook page in tennis, his own website, and more hands-on contact than half a dozen colleagues put together.

But within days of his comments in Rome, he took the plunge—a proactive step, perhaps, to manage the gossip from the inside:

“For me, it’s really [about] connecting with the fans on a different platform than what I’ve done in the past…

“I wasn’t sure in the beginning, to be honest. For me, to enter that right away was not the right thing to do. I wanted to first wait and see and only do it when I felt very comfortable and not get pushed into it by someone.

“I did get many comments from fans and followers that they would love to see me on Twitter. I said, ‘Okay, I’m happy to give it a try and have some fun with it’.”

No surprise, perhaps, that within days he was already nearing the quarter-million follower mark, nor that he was only, thus far, following the ATP, the four Grand Slams and FC Basel!

But he suddenly followed one online innovation with another, taking to ‘Ask Me Anything’ on Reddit—again mixing predictable answers with the unexpected.

Music—more of a surprise: “It all started for me in dance and techno. Then I moved over to rock. Now I’m all over the place!”

Diet? Very Swiss: “It’s important to do everything in moderation. I live a really healthy lifestyle already. As an athlete I do spend a lot of time to make sure I’m eating the right things at the right time but as I get older I definitely am paying more attention to my nutrition.”

A new rule in tennis? “A rule that would only let me serve from the service line. Whenever I want. Seems fair to me :)”… before adding, for the traditional fans who might be heard nodding sagely: “We should get some more best-of-five-set finals back (like at the ATP World Tour finals).”

Finally the ‘father’ in the 31-year-old Federer came to the fore, making a response that every parent would recognise. How would he advise a youngster thinking of becoming a tennis pro?

“Take up football: No just kidding. You have to enjoy what you’re doing. It’s not always easy but it sure is a whole lot of fun travelling the world, meeting people, learning different cultures and playing against other great people. For that, you need to work really hard and play tough and fair. And learn from your losses and your disappointments and make sure you don’t look back with regrets.”

There is always a sense, whether in media, on Facebook, or in assessing his own wins and losses, that Federer follows his own advice with admirable dedication. It may be predictable, it has certainly been successful, but it is never boring.

Just ask the media who, after all these years, still refuse to give him, win or lose, a night off.