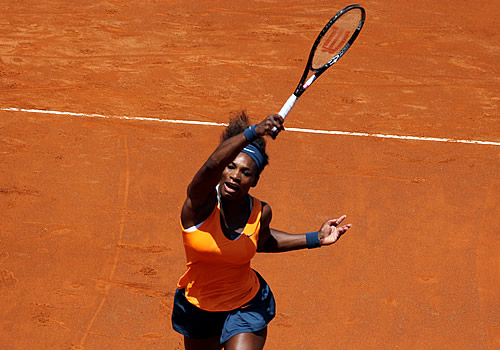 If Maria Sharapova was to defend her French Open title, she would have to find something very special indeed.

In arch-rival—indeed her nemesis—Serena Williams, she faced a woman she had been unable to beat since 2004. That amounted to a run of 12 consecutive losses to the world No1.

Sharapova, though, has rarely given in to doubts about what she can achieve, and with good reason.

In 2004, age 17, she won her first Grand Slam, beating then defending champion Williams at Wimbledon. She rose to No1 in 2005, accumulating 17 weeks in short bursts through the next 18 months, along with the US Open title in 2006 and the Australian in 2008. But already she was suffering repeated shoulder problems and eventually underwent surgery that took her out for a second extended period.

So her battle back to the top of the game—and she won her first French Open last year to claim another month at No1—showed both gutsy determination and an abiding passion for the sport.

Not content simply with returning to the tour, her ambition to improve and excel still burned bright. She took on a new coach, retooled her serve and worked persistently on the weakest part of her game, her movement.

And the wins came, especially on clay—36 of her last 38 matches on the surface—as she pressed hard for the top again this year: She won in Indian Wells and Stuttgart and was runner-up in Miami and Rome—and there lay the rub.

The woman who beat her in those last two finals was none other than Williams who, even by Sharapova’s standards, has set the benchmark for durability, determination and passion for her sport.

Williams first reached No1 in 2002 after winning her own first French Open title and, 11 years later, reclaimed the top spot for the sixth time, the oldest female No1 in WTA history.

Along the way, she won 15 singles Grand Slams and Olympic gold—30 Slams if her doubles titles are included—and three WTA Championships. Yet over the years, she overcame even more health and injury problems than Sharapova. The most serious set-back came when she missed an entire year after winning the 2010 Wimbledon title after cutting her foot and then suffering a life-threatening pulmonary embolism.

But her form since her return suggested that her powers were undiminished. She lost only four matches since her exit in Paris this time last year, and in 2013 she had already won five titles. She entered her 20th Grand Slam final at Roland Garros on a career-best winning streak of 30, including the last 22 on clay.

So it was fitting, on many levels, that these two giants of the women’s game, giants in the power of their stroke-making and in their mental fortitude, the No1 and No2 in the world, should face one another on finals day at Roland Garros.
In their very first meeting at the French Open, both sought only their second Suzanne Lenglen trophy. Williams summed it up for both of them:

And so it proved. Sharapova, always an aggressive, determined player, had never looked so eager to take control, and defended 0-40, and then a fourth break point, on her opening serve. Not content with that, she pounced on Williams’ serve, which started rather tentatively, and broke her to 15 for a 2-0 lead.

Already, Sharapova was screaming ‘C’mon’ on every point she won, clenching her fist, driving herself to find still more. But retaliation was swift, and a roar from Williams signalled deuce on her opponent’s serve. It was as though a sleeping lion had been woken as she broke, held and then converted the last of three break points in the fifth game for good measure.

Both women could hardly have hit the ball harder or with more intent, finding the back and side lines, while also reaching and making returns on the stretch, too. The wind, just to add some drama, threw up the clay and Williams’ hair, and although the American bound up her tresses, she could not control her forehand as the wind carried it long or wide and Sharapova took advantage to break again for 4-4.

But Williams made a few adjustments, added more top-spin and angle to her forehand, and forced Sharapova wide. It was enough to reclaim dominance and there was little the Russian could do to contain it. She made only six unforced errors in the 62 points of the first set, but Williams more often took the risk of stepping into the court to return serve, and it earned her 12 winners, another break, and the set, 6-4.

The level of play in the second set was, if anything, at an even higher intensity. As before, Sharapova dug very deep to fight off break points on her opening serve—it took her 12 minutes to hold.

This time, Williams did not waver, as she had done in opening set, but held in what was become an almost visceral battle. Sharapova seemed to realise that her flat, cross-court forehand would not win this match and tried a drop-shot-lob play, but underestimated the foot-speed of Williams. The Russian went 0-30 down and Williams sensed her moment to pressure the Sharapova serve even harder and broke.

It was now an increasingly up-hill battle for the Russian. She held serve in the fifth game without facing a break point for only the second time in the match—and she still faced deuce. She saw Williams hold serve for a 5-3 lead with two big one-two strikes and two aces, but fought to stay in contention through another deuce service game—but she had managed just five winners in the set to Williams’ 17.

Sharapova made one more point, before Williams found her fastest ace of the match—121 mph—and two more serve-and-forehand winners. Her 10th ace finished the job, an emotional second French Open title 11 years after her first.

In truth, it is hard to see where Sharapova could have given more. Certainly in physical effort, mental toughness, and accurate and strong placement of her ground-strokes, she did not falter. In the end, Williams was bolder in her offence, injected her power with more variety of spin and placement, and showed an athleticism in defence as good as when she last won in Paris.

As if that was not enough, she spoke only in French to the fans, to Sharapova, to family and to team—proving her affection for Paris, where she regards herself almost as a local, and for the French coach, Patrick Mouratoglou, who she has worked with since her shock first-round loss here last year. Serena’s world is, it seems, as serene as can be, which bodes ill for her fellow players.

For there is simply no sign of her resting on her laurels, despite now having two complete career Grand Slams in both singles and doubles. She commented to Sharapova on the podium that she hoped to meet her in the final again next year…but first, she has the small matter of a Wimbledon defence—and who would bet against her?