French Open 2013: Serena Williams plays down the significance of her winning run after third-round thrashing of Sorana Cirstea 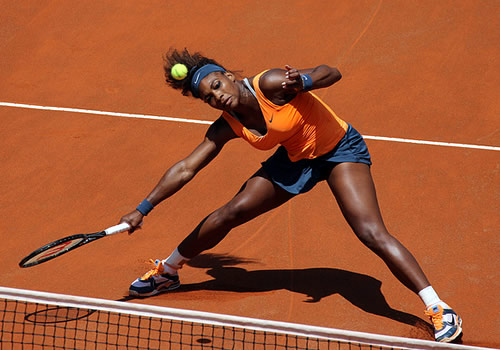 Serena Williams played down the significance of her impressive winning streak after powering to a 6-0 6-2 victory over Sorana Cirstea to reach the fourth round at the French Open.

The world No1 took just 61 minutes to beat her Romanian opponent on Court Suzanne Lenglen and extend her unbeaten run to 27 matches.

Williams, who won the Italian Open in Rome last month, will next face Italy’s Roberta Vinci in Paris.

But the 31-year-old top seed insists she is not focusing on her impressive recent form and is instead taking each match as it comes.

“I actually don’t think about it [the winning streak], and after every match I’m reminded,” said Williams. “I forget about it as soon as it’s done.

“I’m just taking every match a little bit at a time and just trying to stay focused for every match.”

Williams, the 2002 champion at Roland Garros, added: “Every slam is really my priority.

“For me, it’s just about focusing all four of them.”

Elsewhere in the women’s draw, 2010 champion Francesca Schiavone booked her place in the fourth round with a 6-2 6-1 annihilation of French 13th seed Marion Bartoli, and Maria Sharapova overcame Zheng Jie of China 6-1 7-5.