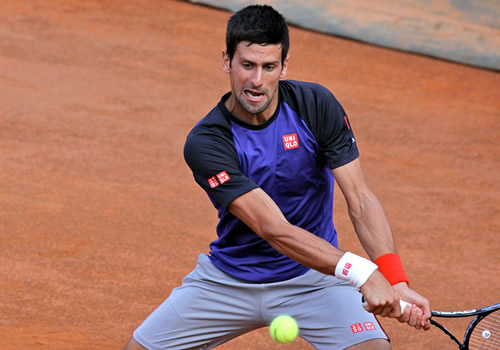 In a tennis era dominated by four men—Rafael Nadal, Novak Djokovic, Roger Federer and Andy Murray—it has been a rare beast who has managed to break this quartet’s stranglehold and reach a Grand Slam final.

In a decade of Majors, 40 tournaments, only 14 other men have reached the last day, just seven of them still active—and Robin Soderling has been sidelined for years with glandular fever, while Juan Martin del Potro is, for a second time, suffering an extended absence following wrist surgery.

Even at the elite layer of ATP competition, only three out of 39 Masters titles have been won by anyone aside from this quartet.

So what No18 seed Ernests Gulbis was aiming to do in this year’s French Open semi-finals was something very special. For it was the charismatic, often controversial, but undeniably talented 25-year-old from Latvia who found himself in the company of three of the four most prolific Grand Slam finalists playing tennis today: Nadal, Djokovic and Murray.

Gulbis showed his flamboyant ability at an early age to rise to No24 four years ago. At the Rome Masters in 2010, he took out Federer and won the first set against Nadal in the semis.

But lack of application ate into his results until a newly-committed Gulbis, forced to qualify even for Challenger events, began to emerge last year to win two titles. This year, he continued to advance with a semi run in Rotterdam, wins over Richard Gasquet and Jo-Wilfried Tsonga in Marseille, and some notable scalps on clay to reach the semis in Barcelona, the quarters in Madrid and the title in Nice.

By Paris, Gulbis was at a career-high ranking of 17, and his surging confidence and improved fitness brought even bigger rewards when he played on Roland Garros’s big stage.

It was, in fact, the Latvian who made a dent in the “big four” record by beating the man at the top of the Grand Slam semi-final league table: Federer has reached 34 of them. Then Gulbis beat Tomas Berdych—one of those scarce men to have reached a Major final—for the loss of just nine games.

But even for the fearless-to-the-point-of-arrogant Gulbis, the road ahead was formidable.

This was his first ever Major semi and he played, in Djokovic, a man with 22 to his name, a man hoping to reclaim the world No1 ranking by the end of the week, and aiming to win his first French Open to complete his career Grand Slam. And Djokovic was, for many, the favourite to complete both missions.

For few can match Djokovic in fitness, nimbleness, determination, and an ability to switch from astonishing defence to efficient attack off both wings. Could Gulbis maintain his cool, maintain his aggressive style of play, against the complete athletic package that is Djokovic?

Gulbis’s coach, Gunther Bresnik—who must take much credit for the new-model Gulbis of the last 12 months—seemed doubtful, though one suspects the same wit was at work that Gulbis invariably employs in his own media dealings:

“Ernests had a very good attitude on the court towards Berdych and throughout the tournament. Now he knows he can keep up the pace because he works hard. Physically, he is now tapping into his potential. I think he has a greater hitting range than before, and is particularly strong on drop shots and lobs…

“[However] Ernests hasn’t a hope against Novak… Without a miracle there’s no chance. Ernests is playing at a high level, but he’s still 10-15 percent lower than Djokovic’s average… Even if Novak has an off-day, the gap is too great, he has more experience. And Djokovic really wants the title.”

And that became clear as the temperature cranked up over Paris. The initial half-dozen games were closely contested, with multiple deuces and little to separate them in points.

But a decisive shift in the tide came in the sixth game as a clinical Djokovic plied his relentless deep, angled baseline tennis to force three deuces, three errors and three break point chances. He sealed the last of them and served out the set after 40 minutes, 6-3.

It felt as though Gulbis had yet to hit his stride in this, their sixth match. In their first, with the Latvian still a teenager, they met in the quarter-finals at this very tournament, and Gulbis had taken Djokovic to three long, tight sets.

But Djokovic was now a six-time Grand Slam champion, and had already won three Masters titles this year—including the last one on clay in Rome over Nadal—and he looked supremely confident. Unless Gulbis could lift his level and eliminate his growing tally of errors, this would a considerably shorter match.

The signs in the second set were not good. This time, it took Djokovic just 33 minutes to break, in the eighth game, and he served it out, 6-3.

Gulbis looked uncharacteristically subdued, apparently handcuffed by the accuracy and consistency of Djokovic’s chess-like placement. He took a comfort break before returning to try his luck in the third set, and had a chance to break the Serb’s opening service game, but Djokovic came up with a stunning cross-court winner off the line and held.

Gulbis certainly continued to build some momentum, surviving some long rallies to pressure his opponent with some drop-shot winners, and earned two more break chances in the sixth game. The crowd loved the fresh variety in pace, but twice Gulbis went for big winners down the line and missed. He then conceded one ace that was shown to be long and Djokovic served out his eight-minute test.

To press his case, Gulbis then made his first love hold of the match and Djokovic, now serving into the sun, struggled to find the court. Gulbis took advantage with a couple of return-of-serve winners to finally break. A couple of minutes, two backhand winners and an ace later, he took the set, 6-3, on the dot of two hours. Paris was now fully engaged.

But Gulbis had increasingly started to show some pain in his left back. On his opening service game, he made a slew of errors to concede a break, but the sun came to his rescue again, as Djokovic went to pieces to give an easy break back—and he smashed his racket in disgust.

It looked as though Gulbis could take advantage of an unusually wayward patch of play from the Serb but, now wearing a cap, Djokovic not only held serve but went after the growing number of second serves from Gulbis and broke.

It was the work of a minute to serve out a match that seemed suddenly to fizzle away after the third-set fireworks, but credit is due to Djokovic for recovering his focus and his killer instinct so quickly.

When Djokovic is totally ‘tuned in’, he is the match of anyone—even eight times French champion Nadal as the Serb knows after his recent Rome victory. But Djokovic will also be mindful of how well Murray played Nadal in the Eternal City.

The Serb, though, would now have the luxury of a long, restful afternoon while those two particular rivals fought for the right to take him on for the title.