French Open 2014 preview: A different stage but the same question - who can deny world No1 Serena Williams? 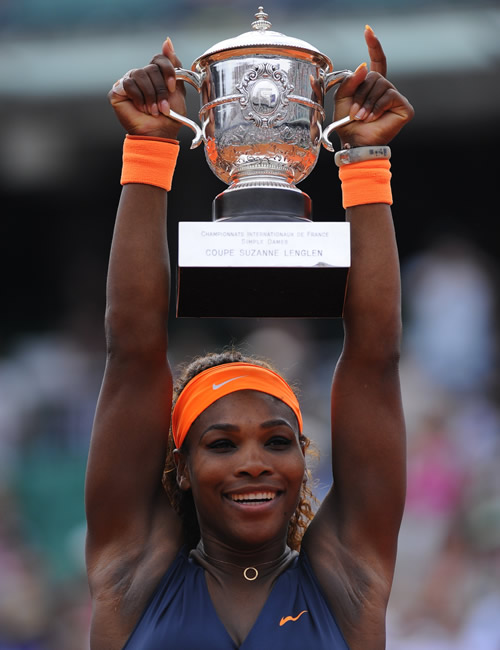 Serena Williams is the defending champion in Paris Photo: FFT

Bearing in mind that Serena Williams comes to the defence of her title at Roland Garros as the only woman on the tour with three titles this year, that she has just defended her Rome title in impressive style, that she has so fallen in love with Paris that she has an apartment here, and that she was unbeaten on clay last year, there are few who would bet money against the remarkable 32-year-old winning her third French Open in two weeks’ time.

Add into the equation that her biggest rival, one of the few to challenge her on a regular basis, Victoria Azarenka, is again absent from the competition with a foot injury, and the odds shorten still further.

Should Williams succeed—just as her 32-year-old counterpart in the men’s draw, Roger Federer—she would move into equal fourth place with Chris Evert and Martina Navratilova on the all-time record of Major champions: 18 of them.

But she has a tough draw, especially in the second week—not least due to the prospect of her old rival, the 2012 French Open champion and No7 seed Maria Sharapova, in the quarters.

And in the wide scheme of things, Sharapova’s clay credentials over the last three years have been second to none. Since losing the French Open semi-final to eventual champion Li Na in 2011, she has put together a 47-4 win-loss record. And this year, she has already won Stuttgart and Madrid, though she came up against another former French champion, Ana Ivanovic in the third round of Rome.

But Sharapova’s problem has always been Williams—well, since 2004 at any rate. The Russian carries 15 straight losses, and the other three losses on clay prior to Rome were all to the American. Last year alone, Williams beat Sharapova in the Madrid and French Open finals as she put together an unbeaten 28-match stretch on the red dirt of Charleston, Madrid, Rome, Roland Garros and Bastad.

Before Rome, there was a slight glimmer of hope for Sharapova, as Williams lost early in Charleston citing fatigue and then pulled out mid-way through Madrid with a thigh injury. But there was little sign of either problem in Rome—though the promised damp and heavy conditions in Paris may take more of a toll.

And while the seeds in Williams’ eighth comprise her elder sister Venus and the woman who beat her at Wimbledon last year, Sabine Lisicki, they will inspire less concern than the women ranged against Sharapova: Kaia Kanepi can be a formidable force when she hits her stride; Then one of either Sam Stosur or Dominika Cibulkova could provide Sharapova’s fourth-round test.

With so much focus on the long rivalry between the stand-out clay performers of the last couple of years, there could therefore be room in the other quarters for previously unheralded French performers to shine.

The No3 seed Agnieszka Radwanska came up against Sharapova in both Stuttgart and Madrid, and avoids her at least until the semis. And the popular Pole has a draw that could propel her beyond her best-ever quarter finish last year.

Her highest seed is Angelique Kerber, who lost her first matches in Stuttgart, Madrid and Rome. More dangerous may be the petite clay package of Carla Suarez Navarro in the fourth round.

But there are plenty of other contenders in the Major that makes a habit of throwing new women into the spotlight. This year’s draw features six former French Open titlists: Along with Williams, Sharapova and Ivanovic, they include Svetlana Kuznetsova, Francesca Schiavone—like Kuznetsova both a champion and finalist—and Li Na. Meanwhile, Sara Errani and Stosur have been runners up in Paris.

Other clay champions this season include Andrea Petkovic in Charleston, Suarez Navarro in Oiras, Caroline Garcia in Bogota, and Maria-Teresa Torro-Flor in Marrakech. And two young talents, Eugenie Bouchard and Karolina Pliskova, are fighting for the Nurnberger title this weekend.

Then there is Jelena Jankovic, three times a semi-finalist at Roland Garros and with a quarter finish last year. She has shown a real return to clay form this spring and sits in the bottom Li quarter. However she faces a fourth-round rematch with Rome finalist Errani, who beat both her and Li last week.

And what of the fastest riser on the tour in the last year, No4 Simona Halep?

It was on the clay of Rome last year that she began her stunning surge up the rankings, beating outstanding competition to reach the semis on her way to six titles during the year.

She reached the Madrid final this year, too, before pulling out of her third-round Rome match with an abdominal injury last week. If there is any question-mark over her fitness, she does at least have a decent build-up towards the later challenges: The other eighth of her section contains Petra Kvitova, Kuznetsova and Ivanovic all competing for the quarters.

Williams should have no problem against opening wild card Alize Lim, though the tall 20-year-old Garbine Muguruza might be a handful in the second round.

Williams may face sister Venus in the third, but the elder 33-year-old Williams has an intriguing opener against the rising youngster, 17-year-old Belinda Bencic, the 2013 French Open junior champion.

Potential fourth-round, Lisicki: Quarters, Sharapova or Cibulkova or Stosur—though the Australian also has a tough opener against this week’s Strasbourg finalist, Monica Puig.

Radwanska is far from at home on clay, but arrives with a clutch of wins on the dirt, notably reaching the semis in Madrid. Her ultimate opponent in the semis is scheduled to be Williams, who she has never beaten in eight meetings. She has also lost twice to Pennetta this year, but the Italian has Bouchard and Kerber in her path to the quarters.

Radwanska opens against Zhang Shuai, who just got her first top-10 win in Rome against Kvitova. Second round might be Pliskova fresh from her strong Nurnberger run. Potential third round, Elena Vesnina; fourth round Suarez Navarro or Alize Cornet; quarters, Kerber, Bouchard or Pennetta.

The 22-year-old Romanian is the 2008 French Open junior champion and in Madrid she beat both Ivanovic and Kvitova on her way to the finals—and then took the first set off Sharapova.

If her injury is behind her, she will be aiming for her first Grand Slam semi. She opens against Alisa Kleybanova, but her first big challenge is likely to be Sloane Stephens in the fourth. Then the going gets tougher.
Potential quarter-final: Kvitova, Kuznetsova, or Ivanovic, though the French champion of six years ago must open her campaign against former junior No1 Caroline Garcia. The young French star ran through qualifying in Madrid to reach the quarters having just won her first singles title in Bogota, also on clay.

No2 seed Li, the 2011 champion and this year’s Australian Open champion, is aiming to do the women’s French-Australian double for the first time in well over a decade, but she’s got a big job on her hands.

Her opener is against French hope, the big-hitting Kristina Mladenovic, and the first seed looming is the formidable Petkovic, at last rediscovering some of her pre-injury form. Potential fourth round, Caroline Wozniacki—dealing with as much off-court pressure as on-court, so it might be the powerful Anastasia Pavlyuchenkova who comes through instead.
Potential quarter-final, Jankovic or Errani.