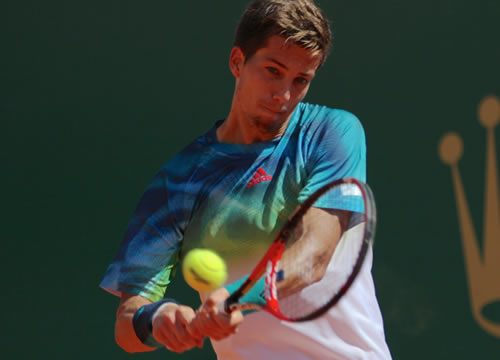 Aljaz Bedene is through to round two at the French Open Photo: Marianne Bevis

Aljaz Bedene, the No52-ranked Briton whose bid to play for his adopted nation in Davis Cup ended in more disappointment this spring, has nevertheless continued to vie with Kyle Edmund and Daniel Evans for the privilege of being the second-ranked British man behind Andy Murray.

Not that such things were of immediate concern to Bedene. His focus was on repeating his success of 12 months ago at the French Open.

For what has never been in doubt is that clay is Bedene’s favourite surface, and amid a clutch of first-round losses last year, he reached the third round of a Major for the first time right here.

This season, plying his trade and building confidence through the Challenger circuit, he picked up three titles, two of them on clay, before making a run via qualifying to reach the final of Budapest.

In Istanbul, he took Milos Raonic to a final set tie-break, but having made it through qualifying at the Rome Masters, he then faced Novak Djokovic in the second round, taking the No2 seed to a first-set tie-break but unable to make a further breakthrough.

In a first meeting against Ryan Harrison, he faced an unpredictable challenge. Only this month, the 25-year-old American broke a new career-high ranking of 42, five years after making a youthful statement to reach No42. As he explained in an open letter to friends, family and fans, the interim years had been full of dips and losses of confidence, but now he felt ready to build on that early success after winning his first ever title in Memphis.

But he had not played the main draw at Roland Garros since his Round-2 run in 2013, and had only won three matches on the red stuff this year.

Bedene got off to a quick start with an immediate break, but Harrison broke straight back, and the two men stayed locked on serve until the ninth game—a key break for Bedene. The Briton held for 6-4, and already looked far the fresher of the two.

Indeed, so exhausted did Harrison seem to be that he won not a single game in the second set and just seven points, 6-0. But the American rallied in the third, and grabbed an early break that he held through the entire set, serving it out 6-3.

Now, though, Bedene regrouped and was moving comfortably as Harrison flagged. The Briton broke in the fourth game, and again in the sixth, serving out with an ace.

After the loss of Evans in his opener yesterday, it made Bedene the first Briton into the second round, with Murray, Edmund and Johanna Konta to play tomorrow.

Vesely beat Bedene in their only previous match, the quarter-finals in Casablanca in 2015, around the time that the Czech reached a career-high 35—and promised to be one of a new generation to go much higher. Now he was just a few points lower than Bedene after picking up shoulder and elbow problems last season, but his win over Sock was a good one. He promises to be dangerous, as Bedene admitted after his match.

“I played him once. I lost on clay. Great serve. He doesn’t miss from the back. It’s going to be a good match if I play well.”

Beyond that, the first seed in this section is No17 Roberto Bautista Agut, who beat John Millman in four sets. The fourth round then promises Rafael Nadal, who continued his pursuit of a remarkable record 10th title here by beating the potentially tricky No45-ranked Frenchman, Benoit Paire.

Nadal took only 25 minutes to sweep through the first set, 6-1, but came up against sterner opposition at the start of the second, as Paire rallied the crowd behind him with a long hold in the third game. The two men had taken almost 20 minutes to play three games. Having held, Paire then broke Nadal, but was immediately broken back.

Nadal again fought off break points and then broke Paire to love for the second set, 6-4. The Frenchman was now feeling the heat and the pressure, had a medical time-out, and began struggling to live with Nadal, who broke at the start of the third. He broke again for the match, 6-1, in under two hours, to set a second-round meet with Robin Haase.

Nadal has been in resurgent form this season after a disappointing 2016 that saw him pull out of the French Open with a wrist injury. Thus far, he has won the clay of Madrid, Barcelona and Monte-Carlo and made the finals of the Australian Open, Miami and Acapulco. Little wonder he heads the Race to London and is the favourite for the title here, too. Should he do so, he would become the first man to win 10 titles at any single Grand Slam.

Also in this half, Djokovic opened his defence with a straight sets win, though it was a tougher battle than the 6-3, 6-4, 6-2 scoreline suggested against Marcel Granollers.

Aljaz Bedene caught between a rock and a hard place as he confesses: I do want to play Olympic Games