Jose Mourinho is not happy at all... 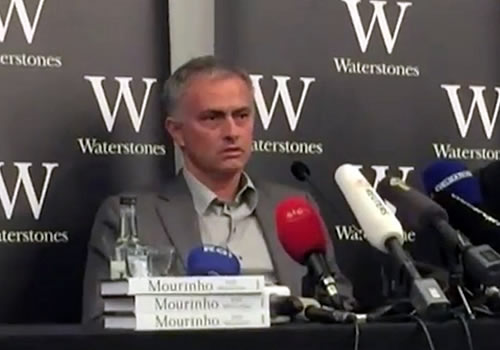 Jose Mourinho was speaking at a book launch in London on Thursday Photo: Metro

Jose Mourinho has revealed his anger at being handed a £50,000 fine and a one-game suspended stadium ban by the Football Association.

The charges relate to Mourinho’s comments in the wake of his Chelsea side’s 3-1 home defeat by Southampton before the international break, with the Portuguese coach questioning referees in a post-match interview with Sky Sports.

£50,000 in the world where we live today is an absolute disgrace.

The former Real Madrid boss claimed that officials were “afraid” to award his side penalties following their loss to the Saints at Stamford Bridge, a result which left the west London club 10 points behind leaders Manchester City in the Premier League.

And a visibly furious Mourinho could not hide his anger at the punishment after being asked about it at a book launch in central London on Thursday, and also took aim at Arsenal boss Arsene Wenger.

“More difficult for me to understand is when I compare different people (Arsene Wenger) with similar behaviours, with different words or with similar words.

“But the word ‘afraid’ is a punishment and a hard punishment. But to say the referee was ‘weak and naive’, referring to one of the top referees in this country and in Europe, we can do.”

Mourinho’s Chelsea side return to Premier League action with a home clash against Aston Villa on Saturday.

The Blues have already lost five games this season, and half of their top-flight matches.