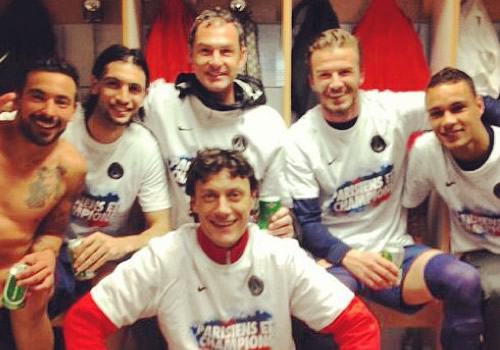 David Beckham has announced he will retire at the end of the season aged 38 after helping Paris Saint-Germain win the Ligue 1 title on Sunday.

Here are some of the best Twitter updates from the professionals following news of the retirement of one of England’s most iconic players.

Southampton youngster Luke Shaw ‏(@Luke_shaw35) looked up to Beckham: “David Beckham announces his retirement, what a great player and a legend to the sport.”

Everton defender Phil Neville (‏@fizzer18) reckons Beckham is England’s greatest-ever football ambassador: “David Beckham -what an unbelievable career- four titles in four countries over 100 caps for England and the best ambassador this countries has had!”

Tottenham youngster Harry Kane ‏(@hkane28) reveals Beckham’s influence on his career: “Can’t believe the main man David Beckham is retiring ! Was a huge role model to me growing up. Will always be a legend on and off the pitch!”

Tennis legend Boris Becker (‏@TheBorisBecker) welcomes Beckham to the club: “The [email protected] has announced his retirement today! Welcome to the new club….”

Finally, former Chelsea midfielder Jody Morris (‏@morriskid) reckons Beckham has helped to encourage more women to watch the sport: “He probably got more women interested in football than any other player too..can’t quite put my finger on why though?? :-) #Becks”