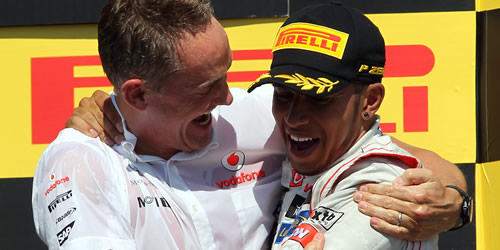 Martin Whitmarsh is confident McLaren will be able to tie Lewis Hamilton down to a new long-term deal.

Hamilton’s future has been the subject of much speculation in recent months, with the 27-year-old’s current deal set to expire at the end of the season.

But McLaren team principal Whitmarsh is expecting to see Hamilton pen a fresh deal in the coming months, with the driver having recently said he is likely to resolve his future over the summer.

“I’m expecting that we will [agree a new long-term deal with Hamilton],” said Whitmarsh. “Lewis has been a member of this team for a long time. We have been concentrating on a season – I think there’s been more speculation, more concern, more interest in this situation in the media than perhaps within the team or in Lewis’ mind.

“We appear nowadays to be asked questions about it but I don’t think it occupies as much time in our minds as it does in column inches.

“I don’t think we should put any timeframe on it. I think for both parties it’s something that’s got to be determined, preferably before the end of the season.

England v South Africa: Cook and Trott as cool as ever