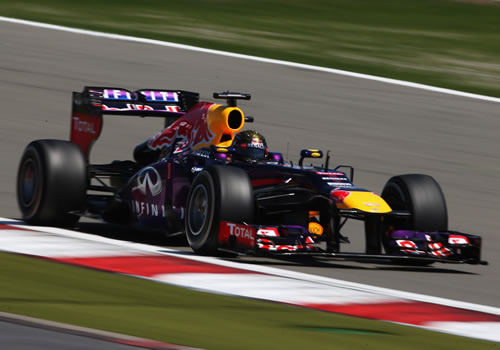 Sebastian Vettel won his first-ever home race in style after leading the German Grand Prix from the first lap to extend his championship lead over Fernando Alonso.

The German held on to take the chequered flag just one second ahead of Kimi Raikkonen – ending his curse of never securing a win in the month of July.

He had a blinding start, overtaking pole-sitter Lewis Hamilton to take the lead, while Mark Webber also squeezed passed the Brit leaving Hamilton in third place after the first corner.

Felipe Massa’s race was cut short on lap four as the Brazilian span off at turn one and stalled his Ferrari – it is the first time in 14 races in Germany that he has failed to finish.

Paul Di Resta was the first to pit, on lap five – but narrowly missed colliding with the Toro Rosso of Jean-Éric Vergne upon his release – an incident that will now be investigated by race officials.

There was more drama in the pit-lane on lap nine as Webber had a disastrous stop which saw his right rear tyre fly off, hitting a cameraman.

The cameraman was taken to the medical centre at the Nurburgring suffering from chest pain and concussion.

Webber was ordered by Red Bull to turn off his engine and the team were able to reattach the tyre in the pit-lane allowing him to re-join the race at the back a lap behind.

Hamilton struggled for grip throughout the race which saw him involved in scraps with Raikkonnen and Alonso – holding both drivers up.

Jules Bianchi had a lucky escape from his Marussia which set on fire after a suspected engine blow-out on lap 24.

Chaos ensued as the abandoned Marussia began to roll backwards across the track, while the recovery crane driver looked on helplessly.

Fortunately no other cars were close by at the time but nonetheless the safety car was deployed for five laps, during which time Webber was allowed to un-lap himself.

The Lotus drivers presented a real challenge to race leader, Vettel, with the German and Romain Grosjean lapping in the high one minute 35 seconds.

Lap 51 saw the Lotus drivers inch ever closer to the three-time world champion as Grosjean reduced Vettel’s lead to 1.5 seconds.

The Frenchman finished in third, taking his first points since Bahrain, after he was forced to give up his second place to team-mate Raikkonen under team orders.

It was a weekend to forget for Nico Rosberg, after failing to reach Q3 and starting in 11th he finished just inside the points in 9th place.