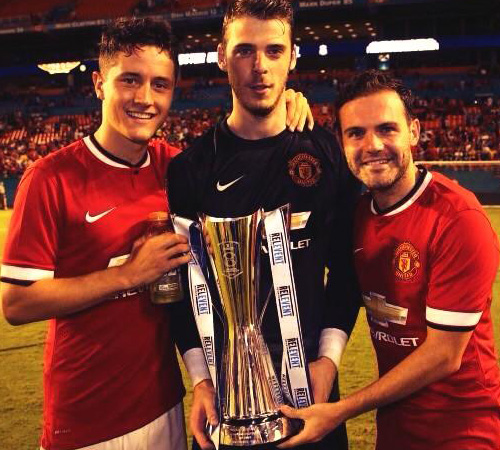 Louis van Gaal has won the first piece of silverware of his Manchester United reign after 3-1 victory over Liverpool in the International Champions Cup on Monday night.

However, the Red Devils stormed back into the final in the second half thanks to goals from Wayne Rooney and Juan Mata before Jesse Lingard sealed the win in the 88th minute.

Here is the best of the Instagram and Twitter reaction from the professionals, past and present, in chronological order to United’s triumph in Miami.

Liverpool captain Steven Gerrard (@stevengerrard) is ready for the latest clash against their bitter rivals: “Stage is set for the final v united #sunlifestadium #miami”

Ex-Reds midfielder Luis Garcia (@luchogarcia14) is braving the time difference to watch Brendan Rodgers’s men: “2am. I call it LOVE… For football Liverpool vs Manchester United.”

United left-back Luke Shaw (@LukeShaw3) issues a warning to their rivals: “This is just the start! Great game lads!”

Ex-Red Devils defender Danny Higginbotham (@Higginbotham05) enjoyed his experience on the tour of USA: “Thank you for all the great comments during the tour it means a lot. Been a great experience and what a way to finish #MUFC #MUTV”

United goalkeeper David De Gea (@D_DeGea) is feeling positive following the victory: “We return home with the trophy and good sensations! Thanks everyone, the crowd was fantastic again!! #ICC2014”

Red Devils winger Ashley Young (@youngy18) thanks all the supporters: “Brilliant way to end the tour with a win in the final. Start as you mean to go on… Thanks to all the fans in America, the support for @ManUtd continues to amaze us! Hopefully we’ll be back again”

United playmaker Juan Mata García (@juanmata8) echoes his compatriot’s sentiments: “The best end for this great tour. Thanks all for your support! Amazing time here in USA. #ICC2014 #mutour”

Finally, former United man Alan Tonge (@Alan_Tonge) singles out the main man for special praise: “Beat Liverpool 3-1 and Van Gaal still critical of the performance. I like this fella :-)”