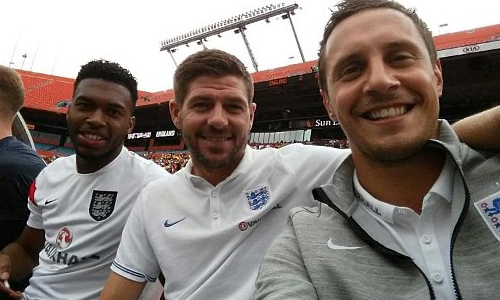 Raheem Sterling was sent off as England were held to a 2-2 draw by Ecuador in their penultimate warm-up game ahead of the World Cup.

Enner Valencia had put Ecuador ahead before England strikers Wayne Rooney and Rickie Lambert found the net to put Roy Hodgson’s side in front – but Michael Arroyo’s spectacular strike levelled the friendly with 20 minutes left.

Antonio Valencia and Sterling were sent off with 11 minutes remaining after clashing – but the England camp appeared in good mood as the Three Lions players took to Twitter following the stalemate.

Rested England and Liverpool striker Daniel Sturridge (@D_Sturridge) is enjoying the spectacle: “Good game from the boys today. 2-2 draw. Was chilling with the skipper and @PJags06”

Ecuador captain Antonio Valencia (@7AntoV) apologises for the flash point which saw him and Raheem Sterling sent off: “I apologize to the country, my teammates, the coaching staff for the expulsion of today. But most importantly, I’m fine.”

Arsenal midfielder Jack Wilshere (@JackWilshere) is hopeful that his Gunners team-mate isn’t ruled out of the World Cup: “Good to get my 1st start since March, legs gave up in the end, cramp in both calfs! Good team performance in tough conditions! #1StepCloser Hope @Alex_OxChambo is fine and fit to carry on! Thought he was excellent tonight and gives us something different! #PrayForOx”

England striker Wayne Rooney (@WayneRooney) is happy to get some playing time under his belt: “Happy to play 65 minutes today and get on the score sheet. 1 step closer to Brazil. Exciting times”

Finally, England skipper Steven Gerrard took to Instagram to congratulate debutant Jon Flanagan: “Congratulations to Flanno and his family on his England debut tonight, I know how much it means to them all. Well done mate!”