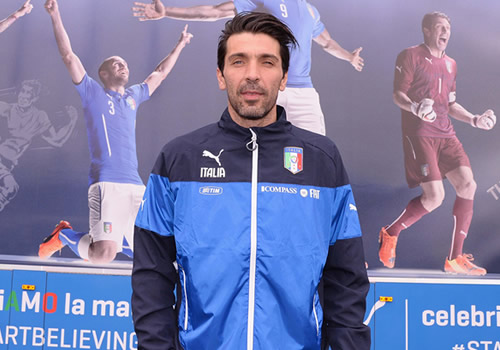 Gianluigi Buffon believes it is vital that Italy kick off their 2014 World Cup campaign with a win against England.

The Azzurri and Roy Hodgson’s side, who have been drawn in Group D alongside Uruguay and Costa Rica, will meet in Manaus on June 14.

Buffon feels that the importance of getting off to a good start cannot be overstated, not least because he is keen to avoid the prospect of Italy needing to get something out of their final pool game, against la Celeste, in order to progress to the last 16.

“Obviously, if we were to beat England in the first match, it would be a big step forward towards qualifying because, in the end, regardless of who you are up against, the first match is your business card, so to speak, and it infuses you with confidence and security for the following matches,” Buffon told Goal at the launch of PUMA’s new World Cup kit.

“It’s true that in the more recent matches we haven’t managed to beat Uruguay very often, but it is also true that statistics are there to be proven wrong.

If we were to beat England in the first match, it would be a big step forward

“Also the match against Uruguay is the last of the group stage and I hope that it won’t have to be the match of a lifetime,because that would mean that we have failed in the other two matches, or at least in one of them.”

Italy boss Cesare Prandelli is this summer expected to draw heavily upon the panel of players that reached the final of Euro 2012.

However, Buffon is buoyed by the fact that the 23-year-old Mario Balotelli, who starred in Ukraine and Poland, could be joined in the Azzurri’s World Cup squad by Lorenzo Insigne (22) and Marco Verratti (21), two starlets that the veteran shot-stopper believes are also blessed with enormous potential.

“Balotelli, Insigne and Verratti are undoubtedly young and talented,” the Juventus skipper enthused.

“One (Balotelli) is maybe slightly more affirmed than the others, but ultimately their careers and their fortunes will only depend on their will to amaze and the effort they put into what is our profession and our sport.”