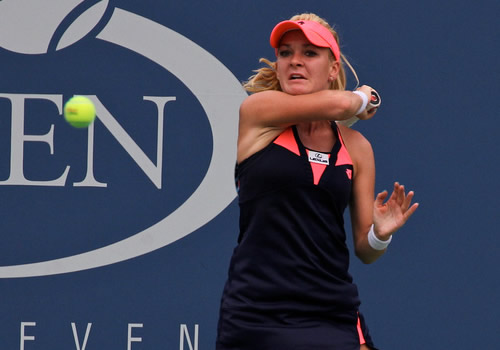 Radwanska is one of the most popular women on the tour, evidenced by winning the WTA Fans’ Favourite award for the last two years, and the Asian crowds in particular adore her. Perhaps that is one reason she has so often produced her best in this final swing of the season.

Certainly the world No4 is not driven by the need to reach the tour’s climax in Istanbul in 17 days’ time. She has already qualified for the third successive year after a season that took her to the quarters of the Australian and French Opens and the semis at Wimbledon, plus three titles and the Stanford final.

But when it comes to the quick hard courts of the Far East, the slender Polish woman shines. In Tokyo, show won the title in 2011 and reached the final last year, while in Beijing she was champion in 2011 and finalist in 2009. This year, she also took the title in Seoul—but then fell victim to a late-year surge from the German Angelique Kerber last week in Tokyo.

Kerber went on to reach the final to take herself up four places to No8 in the race—but with fewer than 300 points separating her from the next four contenders for Istanbul, she needed to make as many points as possible this week.

However, Radwanska was ready to avenge last week’s loss. Indeed she raced to what began to look like a whitewash with a 5-1 lead in the first set before the attacking power game of the German found its mark. Seven times Radwanska had set points, seven times she failed to convert them and Kerber took the opener to a tie-break.

The German has huge fire-power, especially with her left-handed forehand down the line and swerving serve. Now it was she who raced to a lead of 5-2 and had five chances of her own to take the set, but a spate of errors—caused, it seemed, by nerves—gave Radwanska the edge and the set, 9-7.

Kerber was furious with herself, and muttered her way through the first five games of the second set. With her focus gone, she was broken to love in the third game, not helped by her sixth double fault of the match and a shocking drop-shot into the net.

In contrast, Radwanska’s calm and ruthless game picked away at Kerber. In one beautiful rally, she followed an angled drop shot with a cross-court lob and delivered the killer blow with a smash winner.

There was a brief turn in the tide after Kerber summoned her coach at 2-3. After a sharp exchange of comments, she returned to court with fresh aggression, hitting outright winners off a handful of second serves from Radwanska, and broke to level.

The recovery was to be short-lived. Radwanska’s defence and foot-speed are remarkable, and she chased down drop shots, and returned in kind to earn three break points. Kerber could only fend off two of them, and Radwanska took a decisive lead, serving out set and match, 6-4.

The No4’s win gives her the dubious honour of playing another former Beijing champion, Serena Williams, in the semis. She has not beaten the American in any of their six meetings, though their most recent, a couple of months back in Toronto, took almost two hours to decide.

Williams as good as put an end to any ambitions another former champion, Caroline Wozniacki, had for Istanbul. The Dane needed to reach the semis to stand of chance of breaking into the top nine in the race—the likely cut-off if Maria Sharapova remains absent with a shoulder injury. But as in six of their previous seven contests, Wozniacki was no match for the majestic world No1. Williams took only an hour and a quarter to advance to the semis, 6-1, 6-4.

The efforts of two women in the bottom half of the draw also played their part in the chances not just of Wozniacki but of Kerber.

Petra Kvitova is already set to overtake No6 Sara Errani in the race and looked sure of qualification even before she won her third three-setter in a row to beat home favourite Li Na. Kvitova’s run comes on the back of a title-winning effort in Tokyo last week, where she was also forced to three sets in both the semi and the final.

These are indeed encouraging signs for the tall, bold Czech who burst onto the scene like a breath of fresh air with her Wimbledon and Istanbul titles in 2011.

But it is another resurgent player, Jelena Jankovic, world No1 and Beijing champion in 2008, who has put the cat among the pigeons this week.

The Serb is a scant 100 points behind Kerber, though at the start of 2013, few would have her in contention for her first WTA Championships since 2010.

After sweeping past the No12 seed, Carla Suarez Navarro, 6-0, 6-0, she was made to fight a lot harder in the quarters against Lucie Safarova, but finally battled to a 6-7, 6-4, 6-4 win in two hours 36 minutes. It ensured that she would leap-frog Kerber into No8 in the race, right behind the woman she plays, next, Kvitova.

And all the likes of Kerber and Errani can now do is watch, wait, and hope there is room for them on that flight to Istanbul.