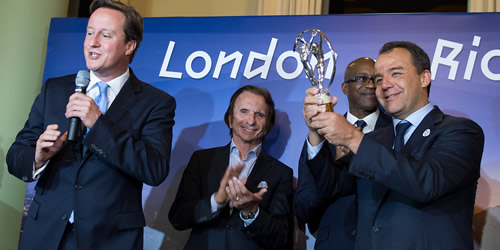 First, a torch relay passed the Olympic flame between 8,000 runners and drew millions to its 8,000-mile route through town and country.

Then came thousand upon thousand of fans to the architectural wonderland, interwoven with sweeps of wild flowers, waterside trails, and armies of smiling, cerise-clad ‘games makers’, that had risen from a down-at-heel corner of London.

There was Danny Boyle’s “Isles of Wonder”, an Olympic cauldron flowering from 205 copper petals, and medals galore for a home nation entirely captivated before the competition even began.

And then there was the sport.

Michael Phelps became the most decorated Olympic athlete of all time. The first women’s boxing medal went to GB’s Nicola Adams, marking the first Games at which every sport had female competitors—and London 2012 also welcomed the first females from Saudi Arabia, Qatar and Brunei.

There was a Bolt of lighting, Mo’s double gold, the wonder of Wiggo and the joy of Jessica. Murray held Centre Court and Hoy held back tears. A teenage Missy made merry, Rudisha made records and Grainger’s grit finally made history.

But the Olympics and Paralympics were just the jam in a 2012 sandwich of sport for London.

Back in February, the prestigious Laureus Sports Awards—the Oscars of sport—were hosted by the capital for the first time. The Laureus Academy, made up of Olympic and world champions who between them own 54 Olympic golds, 43 tennis Grand Slams, 32 Major golf championships, 11 Paralympic golds, and more, were in London to celebrate the latest winners, among them Novak Djokovic, Vivian Cheruiyot, Oscar Pistorius and Rory McIlroy.

Come November, London played host to the climax of the tennis season, the biggest indoor tennis event in the world. During the tournament came news that it would stay in London until 2015—for the talk, and not a little expectation, was of a move to South America and Rio de Janeiro.

But although tennis’s World Tour Finals decided to stay this side of the Atlantic for a little longer, the others had already gone nuts over Brazil.

By coincidence, it was the elite of tennis who spearheaded the migration. The first was Djokovic, who joined three-time French Open champion, Brazilian Gustavo Kuerten, at an exhibition in Rio’s famous Maracanazinho Arena. The following day, Djokovic took part in a football friendly with former Serbian international and Brazilian club player, Dejan Petkovic.

Next came Roger Federer, arriving in Brazil for a tour through Sao Paulo, Buenos Aires and finally Bogota. Federer’s first trip to South America sold out within hours—helped not a little by the star appeal of the line-up he gathered with him: Maria Sharapova, Caroline Wozniacki, Jo-Wilfried Tsonga, Serena Williams, Victoria Azarenka, plus for Argentina, Juan Martin Del Potro, and for Brazil, Thomaz Bellucci.

But the first major international sporting event in 2013 to favour Rio will be Laureus: the World Sports Awards in February will take place in the southern hemisphere for the first time.

And the selection of Rio is very timely. As Edwin Moses, Chairman of the Laureus World Sports Academy, said: “Brazil is one of the most exciting and flamboyant nations on earth and Rio will become the centre of the sporting world over the next few years.”

He referred, of course, to the Fifa World Cup in 2014 and—also for the first time ever in the southern hemisphere—the Olympic and Paralympic Games in 2016. Add in the Judo World Championships next August—and a setting, a climate, a history and a culture that have already captured the world’s imagination—and Rio has become the place to be.

But Rio has been on the Laureus map through a decade of fundraising. The mission of its Sport for Good Foundation is to help young people overcome the limitations imposed by poverty, war, drugs, discrimination and AIDS through sports-related community projects such as the Luta Pela Paz project in Rio’s Complexo da Mare. This has used boxing and martial arts to empower young people and combat gang violence, and Laureus and Luta Pela Paz have also joined forces to train organisations around the world to use boxing and martial arts as a social and educational tool.

The focus of Laureus’s Sports Awards in February, though, will form a tangible bridge from London’s memorable 2012: Many of those Olympics highlights will undoubtedly be relived in the nominations when they are announced on 13 December. The backdrop to the Awards, though, could hardly be more different from the crisp winter weather and traditional surroundings of Westminster’s Central Hall.

Rio has some of the most famous beaches in the world—and Copacabana hosts one of the world’s biggest New Year parties—backed by forested hillsides, palm-fringed lagoons and the famous Sugar Loaf mountain. It is also one of UNESCO’s newest World Heritage Sites.

Summer—perfect for that New Year party and its world-renowned Carnaval in February—is hot but not humid: winter—for the World Cup and the Olympics—boasts sunny, warm days and cool nights.

Rio has, in short, the makings of a sporting fiesta that begins next month, erupts during the final of the World Cup in the Brazil’s biggest football stadium, the iconic Maracona, and peaks with the Olympic and Paralympic opening ceremonies in the very same arena.

The 2007 Pan-American Games left Rio a legacy of impressive venues for track and field, equestrian, diving, shooting, gymnastics, volleyball, and more, and the city’s plans for renovation, new build and infrastructure are ambitious. If this sport-loving party of a city lives up to those ambitions, it will surely create new memories to match those made in London—and that would be some achievement.

Brazil is the largest country in South America, stretches more than 4,300km both north to south and east to west, and borders 10 of the continent’s other 12 countries.

Brazil is the fifth largest and fifth most populated country on the planet, and its two largest cities, both straddling the Tropic of Capricorn, are Sao Paulo and Rio de Janeiro.

Rio 2016 will be the first summer Olympics to be held in the host nation’s winter.

Rio is one of 12 host cities for the 2014 World Cup, with other venues—some to be purpose-built—located the length and breadth of Brazil.

Rio is the birthplace of such world-renowned footballers as Jairzinho, Zico, Ronaldo and Romario, while four of Brazil’s biggest clubs are based in the “Cidade Maravilhosa”—the “Marvellous City”: Botafogo, Fluminense, Vasco da Gama and Flamengo.