Long wait is over for Grigor Dimitrov, champion of Stockholm 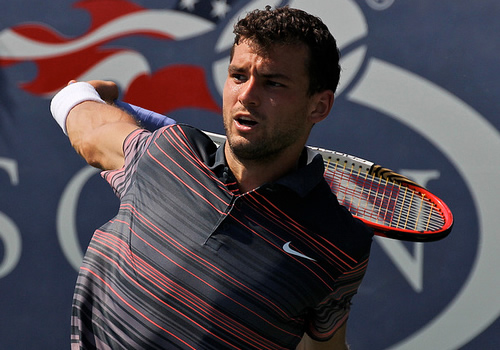 It was a Sunday packed with three finals, each overlapping with the others, and so designed to make any tennis enthusiast dizzy—the more so because of what was at stake for the players.

Two of the matches in particular were heavy with import, for they featured men working hard to qualify for the season-ending climax, the ATP World Tour Finals in London.

With just two weeks left to pile on the necessary points to guarantee one of the remaining four places, the extra 100 points gained by converting a final place into a title were highly prized. For Richard Gasquet in particular, a win would take him past Jo-Wilfried Tsonga to ninth in the race—in practice, into eighth place due to the withdrawal of Andy Murray—and the prospect of reaching the WTFs for the first time since 2007.

He did just that, though it took a nail-biting three-set comeback in Moscow to seal his third title of the year. Should he win two matches in Basel—where he heads next—he could also reach 50 match wins for the first time in his career.

In Vienna, Tommy Haas kept his own London hopes alive by winning the Austrian title for the first time in 12 years. The 35-year-old Haas also needed three sets, but his efforts took him to within 700 points of Gasquet and the outside chance of a first-ever WTF spot: He missed qualifying by one match-win in 2002.

The one final that did not have implications for the London race was Stockholm. David Ferrer, at the age of 31, is enjoying a career-high ranking of No3 this season and was already guaranteed a spot in London for the fourth consecutive year. However, he was clearly out to make a statement to his rivals.

In a tough draw, where all the seeds were top-30 players, he faced a man almost a decade his junior in Grigor Dimitrov—and it proved to be the young player’s tournament as he recorded a landmark victory, his first ATP title.

Dimitrov, aged 22, has long been one of the golden prospects in tennis, a talent tipped to break into the top ranks ever since he captivated Wimbledon by winning the junior title in a style reminiscent of that tournament’s favourite son, Roger Federer.

In the event, it seemed to take Dimitrov time to mesh his many skills, grow into his rangy frame and develop the consistency—and concentration—needed to put a title-winning run together.

Having rattled up the rankings from 360 to 60 in the space of 12 months through 2010 and 2011, he slipped behind some of his contemporaries: Two more 22-year-olds, Milos Raonic and Jerzy Janowicz, both beat him into the 20s and beyond. But 2013 saw Dimitrov finally blossom, first by reaching his first final in Brisbane, then taking Rafael Nadal to three sets in Monte Carlo, beating No1 Novak Djokovic in Madrid, and entering the French Open as a seed for the first time in a Grand Slam.

His next target was to reach the third round of a Major, and he did so in Paris, but on his favourite surface, grass, he reached only the second round at both Queen’s and Wimbledon. And despite also being a former US Open Junior winner, he struggled to find his form on the hard-courts, losing in the first round in New York, Beijing and Shanghai.

In Stockholm, though, the stars came into alignment: He has based himself there for almost a year, his girlfriend Maria Sharapova was in attendance—injury taking her out of the WTA Championships—as was his brand new coach, Roger Rasheed.

In beating another young flair player, Benoit Paire, in the semis, Dimitrov played the kind of all-court tennis that has earned him continuing comparisons with Federer. Stylistically, the echoes can be eerie, from his single-handed backhand, to his service action to the tactical versatility he can produce in angled forehands, drop-shots and net skills.

If there is one area where Dimitrov has failed to emulate Federer, it is his movement and footwork. But this year, and in the Stockholm final, they also began to show improvement.

These days, Ferrer, too, has begun to play a more attacking, all-court brand of tennis, and although his early reputation and success came more often on clay, he has always been adept on hard courts. Now with a strong serve and vastly improved net finishing, Ferrer laid claim to a first Masters title on the indoor hard courts of Paris, reached the semis of the Australian Open and the final in Miami this year.

With two such enthusiastic all-court players going hammer-and-tong for the Stockholm title, there was therefore plenty to get the crowd, including the Swedish royals in the front row, roaring their approval.

It took 24 minutes to reach 2-2, but underlying that parity were two breaks of serve, and a third quickly followed as Ferrer broke to love for a 3-2 lead.

Still the break chances flowed, but this time the Spaniard fought off break points in a seven-minute hold, broke again as the Bulgarian’s error count grew to 14, and survived one more break chance to take the set, 6-2.

But the quality was about to rise further and the two men all but eliminated any chances to break after offering a combined total of 16 break points in the first set. In fact, both chances in the second set were faced by Ferrer in the eighth game, and he conceded the latter with an error that ultimately cost him the set, 6-3.

The match remained finely balanced through to 3-3 in the third, with Dimitrov twice defending break points. And in the end, it was one of the most consistent and focused men in tennis whose concentration wavered for a moment. Ferrer doubled faulted on break point, and despite holding to love in his next service game, the damage was done. For here was a Dimitrov with the bit between his teeth and determined to keep the error-count dropping.

By the match’s conclusion, after well over two hours, the young Bulgarian had made 43 winners—some achievement against the terrier-like retrieval of Ferrer—to take his first title, 6-4.

It was clearly an emotional moment, made more so by a rapturous ovation to this popular player. Dimitrov admitted, in accepting one of the biggest trophies in tennis, that he was “a bit over-whelmed”. He may be over-whelmed again on Monday morning when he sees a new career-high ranking of 22 alongside his name.

Confidence breeds confidence, and this win, in this style, must surely breed plenty more. He plays Basel in the coming week, and is drawn to set up a first meeting with Federer in the quarters. The possible meeting, just like Dimitrov’s first title, has been a long time coming—but that only whets the appetite.