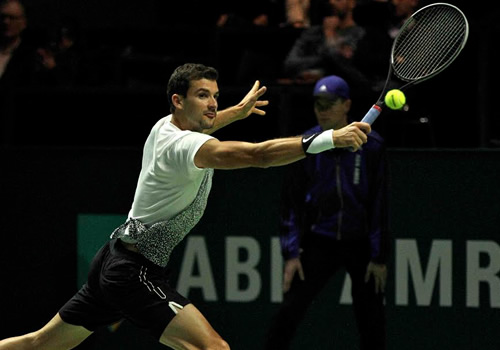 The first time that the new star of junior tennis played in Rotterdam, Grigor Dimitrov was just 17 years old.

Back in 2009, he had won the junior titles at Wimbledon and the US Open the season before and begun to make his mark on the senior tour. He picked up back-to-back Futures titles straight after taking that US junior title, but by the time he arrived in Rotterdam, he had played—and lost—only one main tour match.

He stood out from the first: a tall, slender, good-looking young player with a good-looking game to match, one that his coach was already comparing with that of Dimitrov’s early idol, Roger Federer. The Bulgarian had a similar serving action, picked up the same clothing sponsor—and played with that same backhand action, a one-handed sweep of considerable elegance.

Yet what he achieved in the Netherlands was still remarkable. Ranked 478, and granted a wild card, he beat the then 23-ranked Tomas Berdych in the first match and then took the world No1 Rafael Nadal to three sets. Dimitrov lost, but he had made an impression.

He would continue to make an impression, though his progress up the rankings was steady. Along the way, he reached the semis here in 2013 when ranked 41, last year lost in the second round, ranked 19, and this year arrived as the No5 seed, the owner of three titles during 2014 on three different surfaces and with runs to the quarters of the Australian Open and semis of Wimbledon to his name. 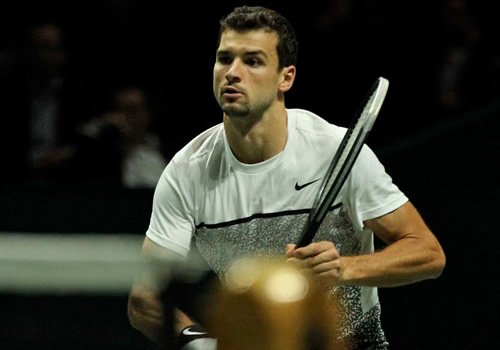 He is still only 23, but has been tipped by many to finally fulfil all that early class in the coming months.

However, Dimitrov had already been tested here, as many of the seeds have been on their switch to the indoor courts for the first time since Australia.

He fought off two match points in a thriller on opening night, beating Paul Henri Matthieu, 4-6, 7-6, 6-2. Even so, he was quick to see the positive side: “This kind of match is never easy, but also rewarding. To be honest I had not expected him to play so well. I had to overcome some obstacles in the first two sets, but the third set was fortunately smoother.”

The way to the top of the rankings is packed with formidable barriers, and Dimitrov has begun to notch up wins over some of them: last year he scored notable victories over Andy Murray at Wimbledon and in Acapulco, Stan Wawrinka at Queen’s Club, Berdych in Rome, Milos Raonic in Australia, Novak Djokovic in Madrid in 2013. But he needs to do so on a regular and frequent basis to rise through the top 10.

Here, he came unstuck against a considerably lesser-ranked player, the 31-year-old Gilles Muller. Though in fairness, the big man from Luxembourg has been showing that good things come to those who wait—and work very hard.

The left-handed Muller this week marked a new career high of 37 after reaching the semis of Sydney as well as the fourth round of the Australian Open, and opened in his Rotterdam debut with a win over the No20 ranked David Goffin, 7-6, 6-7, 6-3.

And he it was who pounded through the first set in a great serving display, winning 14 of 16 first serves—and he hit 80 per cent of first deliveries into play. He did not face a break point in taking the first set, 6-2.

After a long ‘comfort break’ by Dimitrov, the Bulgarian came back with much greater vitality, more focused and serving better. He quickly held the opening game and pressed Muller hard in the second but the Luxembourg man held firm despite his second serve—and there were 20 of them—being severely punished by the aggressive Bulgarian play.

Even upping the pace with a frequent serve and volley plays, Dimitrov could not get a break and they headed to a tie-break, which is dangerous territory against Muller. It was close, but no cigar for Dimitrov, and after an hour and 25 minutes, he had to bid farewell to the tournament that had begun with such a bang for that 17-year-old.

This victory takes Muller into the Rotterdam quarter-finals where he will meet one of two single-handed backhands in the shape of No4 seed Stan Wawrinka or another 31-year-old, Guillermo Garcia-Lopez, who is close to his best ever ranking of 23 after winning the Zagreb title last weekend.

Wawrinka, who also struggled with his form in his opening match today, will have his work cut out.