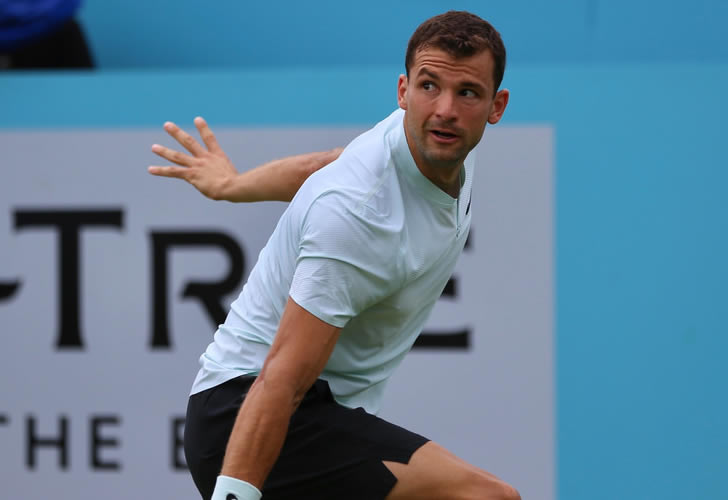 Perhaps at a different tournament on a different day, the No2 seed, former champion, former Wimbledon semi-finalist and reigning ATP Finals champion Grigor Dimitrov would have been Tuesday’s headline match.

However, the popular 27-year-old Bulgarian, playing here for the 10th consecutive year, a winner at Queen’s in 2014, and twice a semi-finalist, was the opening match on a schedule where he was just one of three former champions. And that was without the first appearance at Queen’s in almost a decade by 12-time Major champion Novak Djokovic.

What is more, one of those former champions, Andy Murray, had taken the title a record five times, but much more significant than that, the home favourite, a former Wimbledon champion and No1, was about to play his first match in a year, and against the charismatic, hugely talented Nick Kyrgios. Theirs was, indeed, one of the most highly-anticipated matches of the summer.

But such was the schedule on this packed day that the other Queen’s champion, in fact the defending champion, Feliciano Lopez, was pushed to Court 1, even though he was playing another of the fans’ favourites and the No4 seed, David Goffin.

So could Dimitrov, a perennial favourite here since he was given a wild card as the Wimbledon junior champion in 2009, get the day started with a bang? It went without saying that he hoped for much: He loves the grass and loves this tournament, as he said with a huge beam when asked about his memories of those first visits.

“You’re right, thrilling is the right word! I came when it was all red [the uniform of the sponsor Stella Artois].

“I think the first time was in 2008 when there was a junior event going on, and I have been coming to this tournament ever since. It’s pretty spectacular, actually, my 10th year in a row.

“And the field becomes tougher and tougher, and is a bit smaller than before, so you have to be on the edge right away. That’s one of the beauties when you step on the grass, and this tournament in particular because it can help to build you up coming into Wimbledon. That time of year is pretty spectacular for me… and Queen’s has been a tremendous success over the years for me, so I’m going to expect a lot from myself.”

He was right about the draw, and the strength of the field—the finest line-up in many a year. Two former No1s, four Grand Slam winners, and all eight seeds in the top 20—and on top of that, the unseeded Murray, Djokovic, Stan Wawrinka, and Milos Raonic.

Dimitrov opened against one of the biggest improvers over the last 12 months, Damir Dzumhur, who was ranked 94 a year ago, and is now one of the highest-ranked non-seeds at Queen’s, at 29. His two titles from three finals all came last year, and while he had lost both previous meetings to Dimitrov, Dzumhur took both to three sets.

But he certainly did not have the grass credentials to match Dimitrov: This was his first visit to Queen’s, he had not ventured to Halle, either, and had just one tour win on grass aside from Wimbledon, a modest 3-4 career record in total.

It certainly started well for the grass ‘expert’, as Dimitrov harried the net, sliced his one-handed backhand to within an inch of the net, and got his reward with an early break, 4-1. He held to love for a 6-3 first set in double-quick time.

He rode his advantage to press hard in the first game of the second set, a marathon quarter-hour game in which Dimitrov had seven break chances, but a spirited Dzumhur held his ground through some pitch-perfect lobs, return-of-serve forehands, and more. He held off the last with a tweener, and then raised his hands to the sky in celebration, grinning broadly at Dimitrov, the umpire, and the cheering crowd.

His joy did not last long. A swift hold, and he was in the saddle again, and broken immediately. In the blink of an eye, Dimitrov was 3-1, but then the momentum swung as Dzumhur’s nimble feet and smart tactics drew errors from the No2 seed, a break and then some solid holds through to a tie-break.

Once there, Dzumhur came up with some inventive shot-making, ended up sliding under the net at 3-3, made a great volley winner for 5-4, and Dimitrov obliged with two forehands long to concede the set, 7-6(4).

The man from Bosnia and Herzegovina was in a purple patch, and broke to love at the start of the decider, but Dimitrov responded straight away to break back, and that spelt a tight set up to the eighth game. Finally, Dimitrov got the decisive breakthrough, 5-3, and held to love with his ninth ace of the match. 6-3, after exactly two hours.

While all this was going on, Raonic was having an easier time of it on Court 1, racing to a 6-1, 3-1 lead with 13 aces, before Yuki Bhambri retired. Raonic, like several of the biggest names here, is returning from injury, and his big serve and forehand thrive on the grass. He is, after all, a Wimbledon and a Queen’s finalist, and arrived here after a final run in Stuttgart at the weekend. He next plays either Lopez or Goffin.

But of all the players here this week, aside from five-time champion Murray, Dimitrov seems perhaps the most at home on this springy turf.

“I guess I have a special relationship with grass, it’s always been a surface where I’ve wanted to do well. And I know how limited our time is out there, and you try to get the most out of it.

“I think I’ve learned about those critical situations… the transition from clay to grass, and also to be ready from match to match. It’s unpredictable: there’s the weather, there’s the grass, there’s the moisture, the lines. There’s just so much going on but you know the basics of that surface, and—I don’t want to say I’ve mastered them, but I feel I know those things.

“So right now, it’s entirely up to me to make the right decisions out there on the court—follow my game, follow my instincts, because sometimes that’s all you need to do on grass to make sure you win that extra point.”

Things do not get any easier, though. He next plays Djokovic, who swept past John Millman, 6-2, 6-1, in 65 minutes. And the Serb has a pretty good relationship with grass himself—three Wimbledon titles do not lie.