Is Eden Hazard joining Real Madrid, will Zinedine Zidane move to Chelsea FC and are Arsenal going to spend big this summer?

We sat down with world-renowned football expert and journalist Guillem Balague – brand ambassador for Football Index, the revolutionary platform which gives users the ability to buy, sell and build a portfolio of players – to discuss a number of wide-ranging headlines involving Premier League clubs, including the likes of Manchester United, Chelsea FC and Arsenal.

We also delved into the speculation about Tottenham boss Mauricio Pochettino’s future and looked at why Ander Herrera could become a key player for Manchester United in the coming years.

We saw your interview with Alexis Sanchez and Ander Herrera for BBC Sport on Monday night. It’s been a difficult few months for Sanchez, what sort of mood did he appear to be in?

What surprised many people about the interview – and I got lots of messages about it – was his passion and obviously frustration because he has not been able to show how good he is. That’s partly because of the circumstances such as injuries and the situation pre-Solskjaer at Manchester United. You could sense all of that in his words.

By opening up and by telling everybody what he felt, I think it’s given everybody a different outlook on what he’s like. Most of the time, players are very guarded when they talk.

Doing the interview in Spanish and with Ander gave the right atmosphere for him to relax. Not only has it given a different insight into what he’s thinking, but it allows even the coaches to get to know him a bit more. If he’s not starting straight away, it’s because there is now a process to be done. He has come back from injury, there are players that are better than him…

But everybody knows that he’s fighting for his place. It was an interview for him to tell the fans, ‘I’m here and I’m going to work hard to get back to the level that I was at’.

Ander Herrera was named man of the match in the win at Chelsea FC on Monday night. How important do you think Herrera is for the future of Manchester United?

I think he is a model-player in the sense that he is versatile. He didn’t start as a holding midfielder, defensive midfielder or anything of the sort – he was more like a number 10. But he’s adapted because he’s very intelligent. He knows his limitations, which is the first strength for anybody – in both life and football. And he exploits the strengths that he has. I see him developing into a leader.

Quite clearly, the conversation I had with Alexis was helped by the fact that he was there and he knew what I was after, because I had seen Alexis in that mode before but not in front of a camera. We thought that having somebody like Ander with him would be a good idea to open him up and he worked his magic for that to happen. That is the sign of somebody who thinks about the collective, somebody who is a leader.

He knew the interview wasn’t just about Ander Herrera. If you try and tell any other player in the world that you want to do an interview because we want to open up another player as well as hear from you, most would say, ‘no chance’. But I think Ander knew it would be good for himself and for Alexis too. He has absorbed everything that Manchester United and the city have to offer and I see him at United for a long time.

One player who seems to be constantly in the headlines in terms of speculation about his future is Eden Hazard. Do you have any information about whether Real Madrid are going to pursue trying to sign him this summer?

The situation is clear – he is considering a move to Real Madrid. There is a price for that, which is about €100m. Real Madrid have not yet made the step of talking to Chelsea about it. That may change in a month or two but that’s where we are [now]. I think Real Madrid want to see the possibility about getting one of the superstars from PSG, either Kylian Mbappe or Neymar.

If that happens, then obviously there would be different targets to complement the arrival of one of them. But if it doesn’t happen, then they’ve got in their mind to get Hazard, [Christian] Eriksen or a few others. But they cannot put all of their eggs in one basket because they need to confirm whether PSG would look at selling Mbappe or Neymar.

What have you made of Unai Emery’s start at Arsenal?

I think he’s doing the hardest thing that you can do in any walk of life, which is change the culture of the club, while trying to win as many games as possible. It just feels like the club had fallen asleep. Quite clearly, there was more talent there than the results showed.

Now, we’ve been hearing from Arsene Wenger admitting that Mesut Ozil may have gone into his comfort zone because of his new contract. Of course he did. But that is just part of a bigger issue that was happening at Arsenal, which was that the kind of thing that makes you grow – the inner competition and fighting for places – those kinds of things were abandoned.

They were under Arsene Wenger for many years and now the culture has to change. There has to be more of that competitive tension that you need in a team, in the offices, and throughout the club. That, for me, is the hardest thing to do – to change the culture of the club.

In the meanwhile, he is improving what he has in his hands, which in my eyes is an unbalanced squad. So he’ll need new players and I’m convinced that there will be new investment in the squad in the summer. Meanwhile, he is trying to maximise the potential of the squad.

So, it could be an interesting summer transfer window for Arsenal… One player who has again been linked with a move to Arsenal is Sevilla midfielder Ever Banega. Is there any truth to those reports?

Those are reports that keep coming into the media every now and again – I think the last time was about a month ago. They are stories which originated in Sevilla around three months ago.

It’s very old news and I’m pretty sure that Arsenal are not looking for that kind of player.

Do you have any updates about Arsenal’s search for a new director of football and will Unai Emery be involved in that process?

I think Unai will get involved in everything that has got to do with the first team. As I said, he wants to change the culture of the club and he wants to know everything that’s going on. We should stop thinking about managers as the all-conquering and possessive people who run football clubs because it happens hardly anywhere [these days].

He will be part of the decision making about what happens next, I’m sure. Clearly, Arsenal are looking – not rushing – but looking into hiring a director of football and also looking within the club to see if anyone could be promoted. If it’s the kind of structure they decide to go for, for me it’s the one that makes sense. First of all, you have to decide as a club where you want to be and what you’re going to do. And you have to then find the right people to help you get there.

Ideally, it’s better to have a director of football and then him to find a coach. But at least you’ve got a coach that is trying to give Arsenal layers so the team will be able to adapt to what’s thrown at them. That is a long-term process and meanwhile, they should be looking for players who can fill the gaps that they need. The changes that are taking place at the club have to do with Arsenal having a clear idea of what they want to be and they are looking for the right people to fit in.

There were reports this week in the UK media that Zinedine Zidane could be interested in the Chelsea FC job. Is he really looking to get back into football so quickly and is he a realistic candidate for Chelsea FC?

I don’t think he’s in a rush to go back into football. I think his agent is doing a very good job of linking him to any club that has got a manager not in a strong position. I’m not sure that it comes from him at all. He doesn’t speak the language – he will never speak English.

But anyway, I’m sure that there will be offers to him in the summer or in the next couple of months that will be big. Then he will have to make a decision.

Meanwhile, his name will be linked to any possible job available. But he will only take one – not the biggest one, not the most expensive one, but the one that fits both his thinking – he’s a manager more than a coach – and his lifestyle.

He doesn’t have to pick one to continue a career, he just wants to pick one to enjoy himself. I think what we’re hearing is just the agent making noises for him. 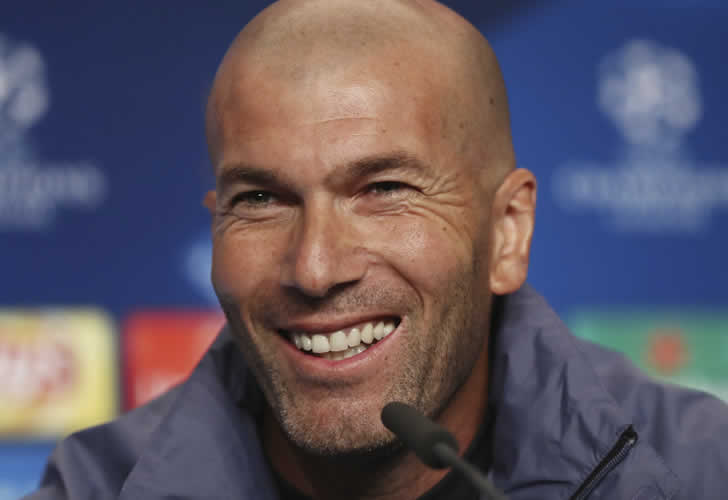 Mauricio Pochettino has been linked with Real Madrid and Manchester United. Do you have an update about his situation?

There is no update. He has got a contract with Spurs. There is no direct clause, so if anybody wants him, they are going to have to convince Daniel Levy. If anybody wants to go for him, they will have to make him the most expensive manager in history.

In a way, that would perhaps change the way that managers are perceived. Because if somebody decides to pay £30m, £40m, £50m for a manager… that could be the start of a new era in a way. I think what we are seeing is a manager that is looking at the day-to-day.

What he cannot control, it’s better not to get worried about. It doesn’t matter if Real Madrid or Manchester United try to come and get him, because as he’s always said, they will have to talk to Levy – it’s not in his hands. So that’s where we stand.

Are there any young managers coming through that have caught your eye in recent years that could have a big future?

There is not the same kind of generation that we saw with Pep Guardiola, Mauricio Pochettino and Unai Emery. That’s the last big generation. In terms of managers who haven’t been given a job in a big club that could do it very well, I can think of Fran Escriba, who was at Villarreal and is a very complete manager.

I can think of Juan Carlos Garrido, who was at Villarreal and has been in Morocco. There are names out there, but in terms of the genius of the Guardiola and Pochettino mould, I don’t see many right now.

The thing with Spanish coaches is that they are so complete in the way that they prepare themselves and there are so many people they have to compete against to get jobs, that they are still some of the best operators in the world. You can see them everywhere in the world right now.

So [Spain] is a good place to look if you are wanting somebody who is a club man and who understands the bigger picture to maximise the potential of the squad. That’s the kind of coach you’ll find in Spain.