Halle 2013: World No3 Roger Federer comes from behind to beat defending champion Tommy Haas 3-6 6-3 6-4 in the semi-final 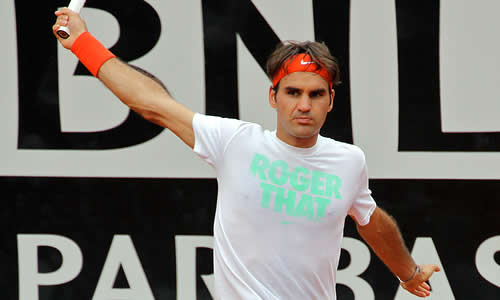 While the Aegon Championship has been whittling down its 56-man draw to four via rain delays, double-duty matches and various seeds facing and falling to the veteran four-time champion Lleyton Hewitt, its grass sibling in Halle Germany has been notching up some records of its own.

Considering the tournament is just 28-men strong, Halle has boasted quality in depth—even with the late withdrawal of Rafael Nadal. World No3 Roger Federer and No9 Richard Gasquet represented the top 10, followed by new No11 Tommy Haas and No13 Kei Nishikori.

Federer was bidding to win Halle for the sixth time, his first since 2008, while Haas was looking for a third to add to 2009 and 2012, but such was the draw that only one would keep their hopes alive by reaching the final: They competed for that honour in the semi-finals.

But on the way to that meeting, Federer had already made one headline splash. He raced past Mischa Zverev 6-0, 6-0, in 39 minutes to record only the second ‘double bagel’ of his career: His first was against Gaston Gaudio at the Masters Cup in Shanghai in 2005.

There was, though, another less welcome headline about this event for Federer. For the first time since he claimed his first title in Halle 10 years ago, he arrived here with no season’s title to his name—and having reached just one final. Indeed not for 12 years had he been without a title before he took to grass. And he understood the need to do well in Halle:

“I do have self-confidence but victory here in Halle would help for sure… this tournament is very important with respect to Wimbledon. But I would like to win my first title of the season here in Halle.”

So one Halle semi-final already stood out from the crowd, but Federer was not alone in making the tournament’s semis special. For a start, it featured four single-handed backhands.

The top three seeds, Federer, Haas and Gasquet, all wield that most lovely of tennis shots—though many regard it as a dying breed. Certainly it is vulnerable to a high, kicking top-spin angled wide to that wing—just ask Federer when he plays Rafael Nadal—but it is also flexible, and a real weapon on the low-bouncing grass where both defensive and offensive slice comes into its own, not to mention the back-hand volley put-away.

The fourth man in the reckoning was unseeded Mikhail Youzhny, who beat yet another one-hander, Philipp Kohlschreiber, in the quarters. Last year, both of them made the semis, along with Federer and Haas, to make this two years in a row that the prowess of the single-hander had dominated.

Three of the four were also over 30—only Gasquet, at 26, was not—and veteran trio had each totted up a decade of appearances in Halle.

Federer first came in 2000 and was now making his 11th appearance. For the 35-year-old Haas, the history was even longer: He first came in 1997 and was making his 13th appearance. For Youzhny, this was his 10th time at the German tournament and his third semi-final. If the Russian could reach his first career final on grass, he could also become one of another growing 2013 club.

So far this year, 11 different over-30s have reached a tour final—Federer and Haas among them—and Youzhny, along with Lleyton Hewitt in London, could make it a dozen.

The entire quartet in Halle had also accumulated some impressive statistics in reaching the semis. Between them, they had dropped just two service games in the 92 played: Haas 26/26; Gasquet 19-19; Youzhny 31-32; Federer 14-15.

But, not surprisingly, the focus at the start of play was on Federer and whether he could finally break his 2013 duck.

He was up against, in Haas, a good friend who had been one of the stories of the last year. Halle 2012 marked the start of a career surge for the German, rising from No87 prior to his title win to No11. And now he was trying to become only the second player to beat Federer twice on grass, the other being Hewitt.

Federer had enjoyed an easier route through, playing two wild cards and dropping only six games. Haas had faced two dangerous unseeded players, first Ernests Gulbis—he won 7-6, 6-4—and then Gael Monfils—a long and testing come-back from a set down, 6-7, 6-3, 6-3.

Not that the disparity showed in the first set. Haas survived a break point in the opening service game and went on to break the Swiss in the sixth.

Haas faced 15-40 as he stepped up to serve for the set, but held firm through a long backhand exchange to force two more in a swath of Federer forehand errors, and he took the set, 6-3.

In the second set, though, Federer began to find better range not just off the ground but on his serving. He broke Haas in the second game and continued to dominate with some flowing serve-and-volley tennis to lead 5-2.

He came close to breaking Haas again, but the German fought off two break chances. It only delayed the inevitable: Federer served out, 6-3, having dropped just three points on serve in the set.

In the decider, Haas had the advantage of serving first, but an early lapse—a couple of netted backhands and a double fault—gave Federer the vital break in the third.

Not that Haas held back in what became the best phase of the match. He attacked the Federer serve, and went 0-30 to force the Swiss into some outstanding winners—two down the line forehands and a smash—to hold.

The next game produced perhaps the rally of the match, a blistering baseline exchange that transitioned into a sliced forehand drop from Federer, picked up by Haas who then watched a winning lob fly over his head.

Haas survived two more break points with some big serving to keep the gap to one game, but Federer never looked in danger of losing his lead. As his ace count rose to 14, he dropped just two more points on serve his way to a 6-4 win, and his eighth final in Halle.

It took Federer’s total of grass match-wins to 120—he tops the list of active players—and what looks like a fine chance to win his 13 grass title.

And while the Halle crowd may have been torn in its allegiances in the first semi-final, when Federer takes to court for the final against Youzhny, who he has beaten 14 times without reply, there is little doubt they will be cheering on their German-speaking, five-time champion.