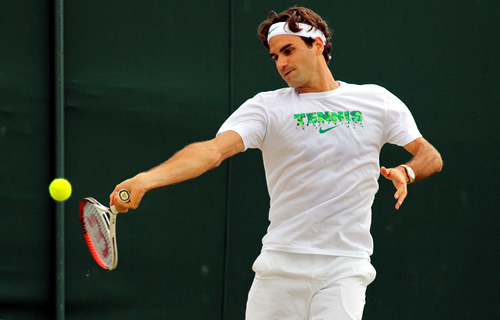 Roger Federer is in action in Halle Photo: Marianne Bevis

It was a surprising thing for Roger Federer to say when he arrived in the small, rural town of Halle, host to the Gerry Weber Open.

This was, after all, a tournament where he had felt entirely at home since winning the first of six titles in 2003, a place where he hoped to defend last year’s win, and where he owned a 43-5 record.

He took his first steps on the turf in the all-too-short grass season last weekend after a few days back in Switzerland courtesy of an earlier-than-expected loss in the fourth round of the French Open.

And he was not entirely happy with how he had taken to the green stuff: “The first time on Saturday wasn’t that easy. I enjoyed it, but I didn’t have the feeling I played that well. I was a bit disappointed after the practice. [Sunday], things went better. I had a good base feeling again.

“It’s important to keep on playing points and you need to be sharp and make quick decisions because there isn’t a lot of time. You need to adapt properly and be creative. Therefore, usually practice is a lot of fun, although it can be frustrating at times.”

When it comes to Federer and grass, there is an assumption that he, perhaps more than any other player on the tour, relishes the switch to the surface where he has enjoyed unparalleled success. For it is not just in Halle that he has won big.

The first of his 17 Grand Slams came at Wimbledon in 2003 and he has gone on to win six more, plus a silver medal on the same turf in 2012. For a surface that claims just a month in the tennis calendar, just one Major and no 500 or Masters level events, his win-rate has been nothing short of remarkable: 122 to 18 losses, head and shoulders above any other player in the Open era. He also tops the list of grass title winners in the Open era with 13: Second on the list, Lleyton Hewitt, has just seven.

And while Federer won Halle last year—incidentally his only title in 2013—he made a shock exit in the second round of Wimbledon. His venture onto Halle’s courts this week is his first on grass since. Reason, perhaps, for his need to ‘prove’ himself, and manage the stress of grass expectations.

You need to be more explosive, sharper, that’s very important on grass

“It’s an interesting period because I have my title to defend here, and actually at Wimbledon, I don’t have anything to defend. But I have to prove myself somehow. So, actually it’s the kind of the wrong way round for me, because usually the pressure in Wimbledon is much bigger because of the points and because you want to play well.”

Of course the defence of points and titles, and the pursuit of more success at Wimbledon, are just some of the pressures that Federer currently juggling. During the Madrid Masters in early May, his wife Mirka gave birth to twin boys to join soon-to-be-five-year-old twin daughters. He made the trip to Rome within little more than a week—vital preparation for Roland Garros—and then turned up arrived in Paris with his entire family.

In Halle, for the first time, he admitted to tiredness—though he did not point the finger at his personal circumstances: “Today, I had to catch up on some sleep.

“I was still a little tired from the practice and, also, the change to grass is always challenging. It’s a different kind of tiredness. You need to be more explosive, sharper, that’s very important on grass.

“Therefore, Mirka and I will have to make sure to get well organised for this week. Of course it’s important that my family is here and [to remember] why I’m here, in order to play tennis.”

The draw he faces may be smaller than at Queen’s in London, but the competition is just as fierce, not least in attracting the world No1 Rafael Nadal fresh from his victory at Roland Garros.

Indeed among the 28 players, there are no fewer than eight with at least one grass title to their names. Still in the draw are Nadal with three, including two at Wimbledon, Philipp Kohlschreiber, the 2011 Halle champion, and Ivo Karlovic—who lies in wait for Federer in the quarter-finals should he beat Yen-Hsun Lu later today.

Federer’s first match was against Joao Sousa, ranked 47 and making his Halle debut. And although Federer served very strongly in the early stages—he did not lose a point on serve until the ninth game—he failed to take advantage of five break points in both Sousa’s first two games and then again at 4-3.

For while Federer was serving well, attacking the net at every opportunity and moving well around the baseline, Sousa warmed to his task, also playing attacking tennis and gradually getting a read on the Federer serve. The Swiss would pay the price as they entered a tie-break. He immediately went down 0-3, and faced two set points at 4-6. He saved both, and when Sousa netted a passing shot, Federer had the chance to serve for the set. Again, he failed to press his advantage and Sousa snatched the set with some bold play—a volley winner followed by a big serve—10-8.

It was Federer who pressed the harder in the second set, too, taking Sousa to deuce time and again, and he finally broke through in the seventh game, serving out with an ace, 6-4.

That momentum followed Federer as he broke in the first game of the third. Sousa had a chance in the next game—two break points—but Federer slammed the door shut, again with a volley winner, broke again to lead 5-1, and closed out a fast-paced and high-quality match, full of attacking and varied play from both men, with a smash, 6-2.

It had been a good work-out for the defending champion, and he will look to sharpen his skills—though his net work under the watchful eye of Stefan Edberg is already in fine order—when he takes to court again with friend Marco Chiudinelli.

And he will need all his grass skills—and plenty of sleep—for what lies ahead. No4 seed Kei Nishikori is his likely semi-final opponent, and the Japanese man beat Federer in their last two matches, on clay in Madrid last year and on the hard courts of Miami in March.

Finally, of course, it could be Nadal in their first grass court meeting since their momentous final at Wimbledon in 2008.

Halle will be hoping…