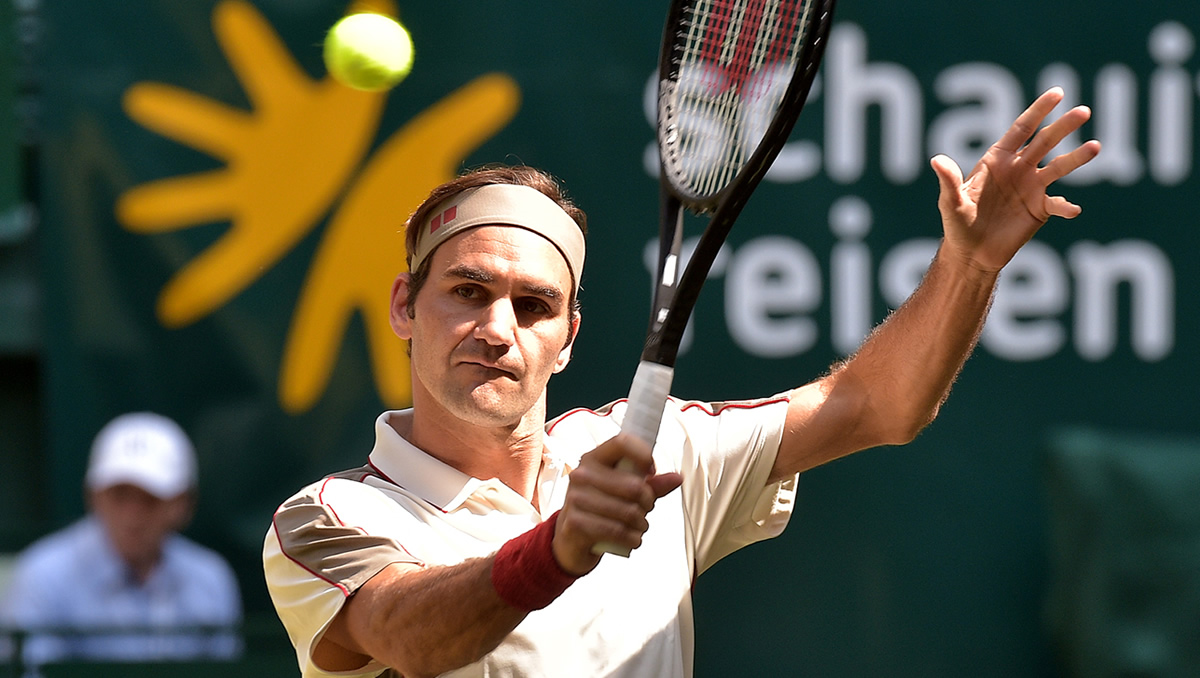 It has been far from easy progress for the nine-time champion Roger Federer on the turf of Halle, just as the draw promised.

His first opponent, John Millman, had caused an upset at last year’s US Open to put out Federer in the fourth round.

His second match against long-standing friend and rival Jo-Wilfried Tsonga had beaten the Swiss in their last two matches, six times in all, and was back to playing the kind of charismatic tennis that had earned him two Masters titles, a runner-up place at the Australian Open, and a career-high ranking of No5.

Then came the resilient, hard-working Roberto Bautista-Agut, a constant in the top 20 and with the ability and physical toughness to beat world No1 Novak Djokovic in both their meetings this year. And he played flat, fast and with almost no unforced errors through almost two hours and another three sets—finally letting his hand slip in the last game to make those vital errors.

It marked Federer’s 30 match-win of the year, his 66th at Halle,

But what had been happening while Federer was fighting to reach the semis was proving just what a difficult draw the Noventi Open posed, and how difficult is the transition from a long, hard clay season to the all-too-brief grass season.

The No2 seed and home favourite Alexander Zverev, who had been put through the wringer to reach the quarters at Roland Garros and then lost his first match, a two-hour three-setter, in Stuttgart, got through his first two matches but came up against a blistering David Goffin in the quarters, and lost in a final-set tie-break.

The No3 seed Karen Khachanov also lost in the quarters, and the defending champion and No4 seed Borna Coric was forced to retire with a back injury. Federer was instead left to face the 43-ranked Pierre-Hugues Herbert, a Frenchman who had partnered Nicolas Mahut to all four Major doubles titles, and was now focusing more deliberately on his singles career.

He had spent time practising with Federer at Halle in the past, but the two had never played on the tour, and it was, on paper, an intriguing match-up because of the attacking variety each was able to bring to the court.

And would those long matches weigh heavy in the Swiss legs, or would he reach his 13th final on the German turf that he loves so much?

Clearly, he had recovered very well from the Tsonga and Bautista Agut tussles, and Federer soon laid out his credentials with a break in the second game. It was a lead he never gave up, did not face a break point, and was solid on serve. Half an hour, and he was a set to the good 6-3.

Herbert was almost broken in the first game of the second set, but fended off three break points. They stayed locked through to 3-3, until Federer worked his next chance, and this time he did break. A love hold and he was 5-3 up, and a forehand pass from the Swiss broke once more for set and match, after just 62 minutes, 6-3

It was his most assured and confident match of the tournament so far, boasting 20 winners for just eight unforced errors. More impressive still, he had dropped only one point on serve in that second set, and five in the match as a whole. And when Federer’s serve is on song, the rest of his game invariably follows.

He will next play David Goffin for a ninth time, and while the Belgian is currently ranked at only 33 after taking time to recover his confidence following a series of on-court accidents, the nimble and talented Belgian has been a top-10 player, and beat Federer in their last completed match. It was a notable victory on another court where Federer has shone, at the ATP Finals in London.

Goffin reached his first final since 2017 with a 7-6 (4), 6-3 win over Matteo Berrettini, but even with that past win in the locker against Federer, the statistics all point to a 10th title for the Swiss come final Sunday.

For a start, only 23 men in 20 years have beaten Federer on grass, and he owns more grass titles than any other man in history.

In 17 visits to Halle, he has reached 17 quarter-finals and 15 semi-finals, and should he win this 13th final, it will be the first time he has won the same tournament 10 times.

But it was the nature of his run that pleased him:

“I am happy and relieved that I’ve again reached the final. It was overall a lot of hard work in recent days. I’m just happy that it has worked so well this week.

“I’m in a much better shape physically this year than before last year’s final. I didn’t play so much tennis, so I hope to mobilise some extra energy.”

“I get another chance after last year’s loss against Coric, because after my loss here last year I didn’t know if I was going to ever be in another Halle final. You know, you always leave with a bitter sweet taste where you had a good tournament and yet you’re frustrated you lost the finals.

“So I’m happy I’ve got another opportunity to win this tournament I like so much, and of course it will be special to win a tournament for the first time ten times.

“But, you know, somebody tough is going to be there in the final to make my life difficult. So I’m really just going to be trying to focus on the match. I know it sounds boring but that’s what I’ve got to do, block out all the rest, and I did that exactly today.”

He will need to, and the memory of last year’s bruising final loss to Coric in three sets is clearly still fresh in him mind.

The Halle final is at 1pm local time (midday in the UK).