Halle 2019: Roger Federer makes it a record 10 with victory over Goffin 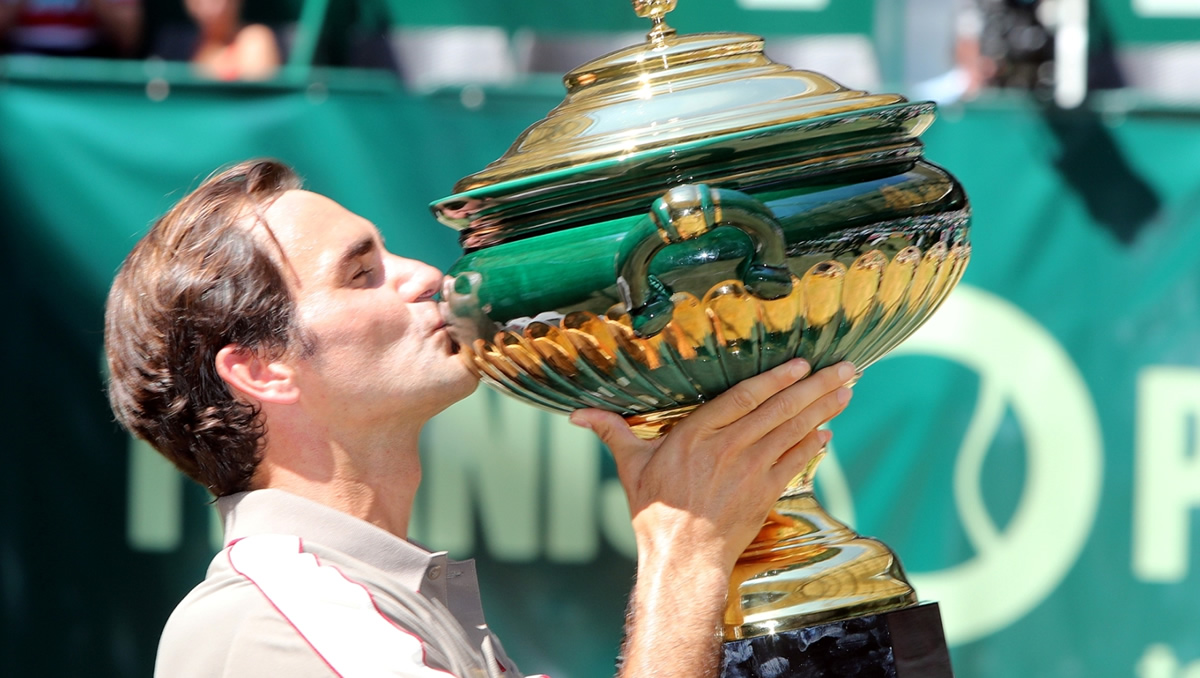 The final day of the Noventi Open in Halle on final Sunday has found itself in a very familiar position.

For the 13th time, in the title match, 37-year-old Roger Federer was on one side of the net. On nine previous occasions, he had gone on to lift the green and gold trophy. Last year, however, he lost to a man ranked 34 in the world, a man who had beaten Roberto Bautista Agut in the semis—albeit by retirement. That man was Borna Coric, who had returned from a couple of years blighted by injury problems.

This year, Federer overcame the ever-resilient Bautista Agut in a tough quarter-final, but he would not face Coric this time: The young Croat was again knocked back by injury. This time, Federer’s last hurdle would be David Goffin, a former top-10 player who had been knocked back by a couple of on-court accidents. But in Halle, the Belgian was beginning to look more like the fleet-footed, nimble player who had beaten Federer in their last completed match. It was a big one, too, the semis of the ATP Finals, and Goffin came back from set down to score his, thus far, only win over the Swiss.

He came into this final ranked just one spot higher than Coric had been, at 33.

For Federer, progress had not been easy, but he had this year bypassed his Stuttgart warm-up, and it seemed to take him a couple of matches to build a head of steam. However, in the semis against Pierre-Hugues Herbert, he looked more like the man who has won more grass titles than any other. He made 20 winners for just eight unforced errors, and dropped only one point on serve in the second set, and five in the match as a whole.

All this at just a few weeks short of his 38th birthday. Indeed a 10th title in Halle would make him the oldest player to win a tour-level title since 43-year-old Ken Rosewall in 1977.

For Goffin, too, this was an important moment. 2017 brought his best ever season, albeit seriously interrupted by an ankle injury during the French Open: He won two titles, including his first ATP500, and reached three more finals, notably another 500 in Rotterdam, and then the ATP Finals—and that was his last final until today.

In the interim, he had reached six semi-finals, so this was a significant breakthrough, bringing a win over the No2 seed Alexander Zverev into the bargain. He was already assured of a rise of 10 places in the rankings, and victory would see him back in the top 20 in time for the Wimbledon seedings.

He started very crisply too, using the width of the court with angle and precision, and he it was who got the first chance to make the break, 0-40 up on the Swiss serve. But Federer made four points in a row, pulling off a first drop shot winner, and finally held.

With the sun at its highest, the shadow across the Halle court is a challenge in itself, blocking out one baseline. With the switch of ends, it was Goffin in the shade, but he was seeing the ball like a football, and was holding serve with little trouble.

In fact he was pressuring Federer through most of the set with accurate serving, and precision, pacey strikes angled to the backhand corner. He had Federer at 0-30 in the seventh game, and 15-30 down in the ninth. But the Swiss was hanging in, finding his best serves when it mattered, rushing the Belgian at the net, and thwarting him with sliced returns that skimmed through the court.

It headed, then, to a tie-break, with the two poised equally at 36 points. And once there, Federer upped the stakes with a vengeance, opening with an ace and surging to a 5-1 lead. Goffin visibly tightened, playing too safe, making errors, and would win just one more point, 7-6(2).

And it seemed to take the wind out of Goffin’s sails. His form slipped in equal measure to Federer’s improvement. A double fault from the Belgian brought up break point in the first game of the second set—the first Federer had worked in the match—and Goffin double faulted again for a second break chance. At the third time of asking, Federer broke through, and held for 2-0.

Federer’s serve rose from 56 percent to well over 70 percent and a drop-shot return of serve winner rubbed salt into the wound. Federer broke again, and he was not content with that. He broke once more, 6-1, to close out that 10th victory.

The Swiss man’s decision to play the clay season, and then take a week off rather than play Stuttgart, seems to have been a good call. He admitted after his semi-final that he had more energy left this year than he had last, adding:

“After my loss here last year I didn’t know if I was going to ever be in another Halle final. You know, you always leave with a bitter sweet taste where you had a good tournament and yet you’re frustrated you lost the finals. So I’m happy I’ve got another opportunity to win this tournament I like so much.”

This was the first time that Federer has won 10 times at the same tournament, and takes his record tally of grass titles to 19. But to give some context to the achievement of the soon-to-be 38 Swiss, he first played in Halle as an 18-year-old in 2000. No other player in that singles draw still competes on the tour—while Federer’s coach, Ivan Ljubicic, and Goffin’s coach, Thomas Johansson, were in the draw.

He said: “It is an emotional, touching moment, a super feeling. I never thought that I would ever win here so often and for so long.”

No doubt, though, Federer would now be tempted to turn his eyes on the Queen’s Club in London, where his long-term friend, Feliciano Lopez, who turns 38 a month after Federer, was also trying his luck at winning another grass title.

You cannot, it seems, keep a good man down—either in Halle or London.