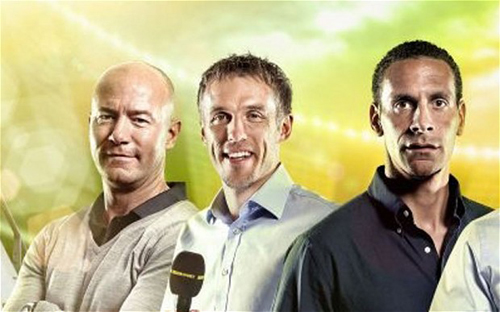 Phil Neville was forced to contend with a backlash following his commentary of England’s 2-1 loss to Italy as Twitter was heavily critical of the former Manchester United star’s debut on BBC Sport.

Ex-Liverpool midfielder Dietmar Hamann and world-renowned comedian Ricky Gervais were among the famous names who took to the social media site to comment on Neville’s docile tones during the World Cup clash.

Even the police got involved as Policing South Warks (@SWarksCops) posted: “At least we know Phil Neville won’t stir the crowds in the pubs into a frenzy. Drink sensibly. #WorldCup2014 #KnowYourLimit #EnglandvsItaly”

Hamann (@DietmarHamann) is worried we may not see Neville in the second half if he has access to Twitter: “If Phil Neville reads his twitter feed he may not come out for the second half.”

Former Northern Ireland manager Jim Magilton (@magilton7) is dosing off listening to the ex-Everton midfielder: “Phil Neville gets you going down he? Glass eye to sleep! #paintdry”

Comedian Gervais (@rickygervais) has the humour sucked out of him: “Not even Phil Neville can cheer me up now.”

Former Republic of Ireland striker Clinton Morrison (@morrisonclinton) is happy to replace Neville as he is looking for media work: “Also one last thing I can do what Phil Neville was doing and I’m available I would entertain you lol”

Ex-Chelsea midfielder Jody Morris (@morriskid) breaks the bad news: “Oh and Phil Neville on the commentary…hahaha don’t think I can take that again!!”

Finally, the man-of-the-hour Phil Neville (@fizzer18) takes the criticism on the chin: “1st live co-comm last night-sometimes u have to take the criticism – it will only make me better- thanks for the feedback(ahhahaha)!”

Ferdinand: Liverpool players must treat Suarez as the enemy