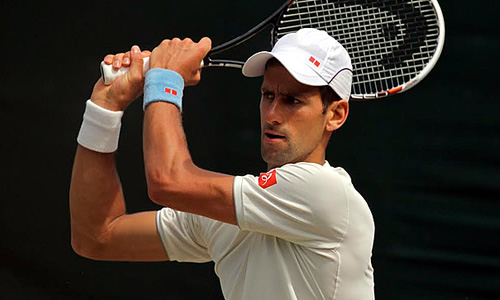 Big names, high hopes and familiar champions marked the tennis crescendo through the glamour of the Roland Garros clay and the elegant tradition of Wimbledon.

After the thrills and spills of Paris and London, the emergence of stars in the making and the eventual dominance by greats of the game, no surprise, then, that there comes a communal breathing-out: sun and sea, mountains and marriage take the place of sweat and toil, fortitude and fame.

For French Open finalist and Wimbledon champion Novak Djokovic, there was sun, sea and marriage to fiance Jelena on the Adriatic shores.

For record-breaking French champion Rafael Nadal, it was back to his beloved Balearics for rest and relaxation.

For Wimbledon finalist and father of two-month-old twin sons Roger Federer, it was family time in the mountains of his Swiss homeland—and a chance to celebrate the fifth birthday of his twin daughters.

It is a familiar pattern in this high-summer hiatus, particularly for those who have gone deep in these closely-packed Grand Slams. First some recuperation, then the mid-season training block in preparation for one of the most gruelling runs in the season.

The US Open Series sees the start of the hard road to the final Major of the year in New York, and it begins for the big names with a double-headed Masters swing that has strong echoes of the last time the tour headed to North America, for Indian Wells and Miami in March.

This time, the first of the Masters is in Canada, the Rogers Cup in Toronto, with the second hot on its heels in Cincinnati.

But just as in March, the road is paved with a choice of tournaments rich in prize money, ranking points and the potential to fine-tune tactics, fitness and focus for the rigours or what lies ahead. And just as in March, there is another chance for clay-court aficionados to get the grit in their soles before the red stuff disappears until next spring.

For in the fortnight immediately following Wimbledon, there is the unique spectacle of grass, clay and hard-court tennis action at the same time and, with the big names absent from competition, this is the opportunity for lower-ranked players, both young and old, to make headlines.

In the week that the Djokovics made the cover of Hello magazine, the 33-year-old Lleyton Hewitt claimed his 30th title on the grass of Newport but also, for the first time in his long career, won the doubles title at the same event. And his 30 titles? Well that made him one of a unique quartet of active players alongside Djokovic, Federer and Nadal.

While Grigor Dimitrov holidayed with Maria Sharapova after his outstanding grass run at Queen’s and Wimbledon to reach a career-high No9 ranking, Pablo Cuevas was putting together the best run in his decade as a pro.

He won his first ever title in Bastad and, a week later, came through qualifying for a second title in Umag. What’s more, he beat Fabio Fognini and Tommy Robredo on final Sunday after Saturday’s semis were washed out by rain. His reward, after missing almost 18 months in 2012/13 due to knee surgery, is a surge to No40.

And as Federer played snow-bound tennis on a Swiss mountain with Olympic skier Lindsey Vonn, Roberto Bautista Agut was showing his versatility to break the top 20 for the first time as he backed up his first title on grass in ‘s-Hertogenbosch in June with a second on the clay of Stuttgart. He is now ranked No16.

But grass and clay aside, all eyes have been turning to the hard courts. The US Open Series is a group of tournaments that ties success during the North American swing to earnings at the US Open itself.

The men’s sequence links together five tournaments. Ahead of the Rogers Cup are the 250 in Atlanta and the 500 in Washington. Squeezed between Cincinnati and New York is Winston-Salem.

The three players who accumulate the most points during these tournaments are eligible for bonus payouts at Flushing Meadows—up to a staggering $1 million should they win the US Open itself. Which is precisely what Nadal did last year. With a stunning run through Montreal and Cincinnati, he made it three titles in a row in New York. But the Series has been hit this week with the news that he will play neither Masters this summer due to a wrist injury.

American No12 John Isner is one of a very rare group who has opted to play the entire Series, and his plan certainly started well with the Atlanta title. However his campaign hit the rocks when he fell in his first match in Washington.

But this big 500 event has an impressive draw of 48 that includes the first top-10 men in action since Wimbledon. No1 seed is Tomas Berdych, but more closely watched will be Canadian Milos Raonic, at a career-high No7 in the rankings and seeking to build on his breakthrough 2013 where he made the final of his home Masters.

Raonic reached his first Grand Slam semi at Wimbledon last month and, although he has yet to reach a final this year, all his previous five titles and five further finals have come on hard courts. He is a man no-one will want to find in their segment of the draw in the coming weeks.

At a hard-court tournament that is not part of the US Open Series, Bogota, Bernard Tomic won the title, but the 21-year-old Australian is not the only young player with hopes of big things on the hard courts.

Popular Canadian Vasek Pospisil, a semi-finalist in Montreal last year, has been making waves in his doubles partnership with American Jack Sock. They beat the Bryan brothers to claim the Wimbledon title and have gone on to win the Atlanta doubles title. But both players have strong singles ambitions.

Pospisil is currently playing his third consecutive event in the Series, though faces the unenviable prospect of Berdych if he is to reach the Washington quarters. While 21-year-old Sock, riding a career-high No60, lost out to Raonic this week, he made the semis in both Newport and Atlanta.

Also breaking cover this week for the first time since Wimbledon is No11 Kei Nishikori, who won the Memphis title earlier this year before making a strong run in the clay swing.

But who else is looking dangerous ahead of the first Masters of August?

Veteran Ivo Karlovic, whose huge height and serving weaponry make him so dangerous, has already been a finalist at Newport and Bogota.

Marin Cilic, who won two titles from three finals this spring and made a quarter-final run at Wimbledon, may have switched back to clay for his home tournament of Umag but he is a close fourth behind Federer on the current ATP hard-court 12-month index.

That table is led by Djokovic, and he and Federer are both targeting a reclamation of the Rogers Cup in the absence of Nadal. And when it comes to Cincinnati, it will be no holds barred as Federer goes for a sixth at his most successful Masters event while Djokovic seeks history with the last Masters title missing from his resume.

These are, then, interesting times as younger stars such as Dimitrov, Raonic and Nishikori look to press the big names above them: Djokovic, Nadal, Federer and Wawrinka—who, as well as winning the Australian Open this year, made a stand-out run to the semis of the US Open last year at the expense of Berdych and Andy Murray.

The Briton, after the back surgery he underwent after the US Open last year, has not won a title since Wimbledon 2013, but there is no doubting his prowess on American hard courts. He won the Rogers Cup in 2009 and 2010, took the Cincinnati title in 2008 and 2011, and has also won both the Miami and the Shanghai Masters twice. And his first Major came in New York in 2012.

With Nadal missing, and Juan Martin del Potro still absent following wrist surgery, it may therefore be no surprise to find Murray back knocking on the door of the top four ahead of the US Open this year.

US Open 2014: Li Na pulls out of Flushing Meadows