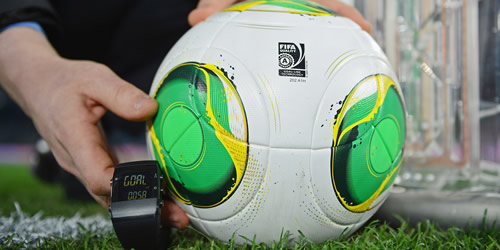 Hawk-Eye will provide the technology from next season Photo: FIFA/Getty Images

British-based company Hawk-Eye has been confirmed as the provider of goal-line technology for the Premier League from next season.

The decision to adopt the system was made during Thursday’s Premier League meeting.

Hawk-Eye was preferred to the German-based firm GoalControl, which has recently been selected by Fifa as the official provider of the technology for the 2013 Confederations Cup and next year’s World Cup in Brazil.

The Premier League confirmed that the camera-based system will be installed in all 20 top-flight grounds during the summer and will be ready for use on the opening weekend of the 2013-14 season on Saturday 17 August.

Managing director of Hawk-Eye Innovations Stephen Carter said: “We understand the responsibility that we have been given, and that the real challenge lies ahead in consistently delivering the technology that football deserves.”

Hawk-Eye technology is already used in tennis and cricket – and the football system, which uses seven cameras per goal, will notify referees if the ball has crossed the goal-line via a notification on officials’ watches.

The Football Association hopes to install the system in time for the Community Shield at Wembley in August. The technology is expected to cost between £125,000 and £250,000 to install in each ground.

FA General Secretary Alex Horne said earlier this week: “I always thought it was an ideal piece of technology to allow into the game.

“So technology that says ‘yes, the ball has crossed the line’ and lets the referee know makes an awful lot of sense to me.

“Particularly where it’s a knock-out situation, incorrect decisions have less opportunity to even themselves out over a season.”

Fifa announced its decision to use GoalControl as its offical supplier of the technology for the Confederations Cup and World Cup earlier this month.

Following the news, a Hawk-Eye statement read: “Sport teaches us many lessons, including accepting defeat graciously and having confidence in your ability to bounce back strongly. Hawk-Eye wishes Fifa and the appointed GLT supplier every success at The Fifa Confederations Cup 2013.”

Eden Hazard: Fernando Torres is the most criticised player in the world