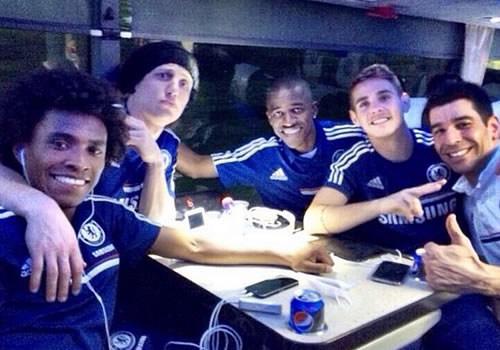 Willian posted this picture on Twitter after the win Photo: Willian/Twitter

Chelsea kept within two points of Premier League leaders Liverpool after a hard-fought 1-0 win at Swansea City on Sunday.

Demba Ba scored the only goal of the game in the second half after the Swans had Chico Flores sent off after just 15 minutes.

The win kept Jose Mourinho’s side second in the Premier League table heading into the final four games of the season and set up a mouth-watering clash with Liverpool at Anfield on 27 April.

Here, we round up some of the best reaction to the game on Twitter.

Ex-Netherlands international Mario Melchiot (@MarioMelchiot) reckons that Mohamed Salah needs to up his game: “Salah is a bit rusty! His eagerness is spot on, now he need to be a bit smarter with his decisions! #mmlove #CFCLive”

Hazard (‏@hazardeden10) tweets his love for Ba after he nets his second crucial goal for the Blues within a week: “Dembbaaaaaaa baaaaaaaaa❤️❤️❤️❤️❤️”

Chico Flores (@ChicoFlores12) says sorry to Swans fans after his red card: “Apologize for my expulsion to the fans and to my teammates, who have made a great effort for 70 minutes with one man less. We will save us !”