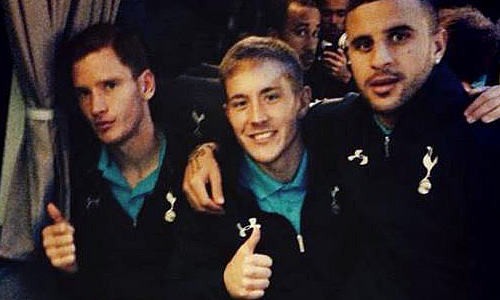 Everton and Tottenham Hotspur failed to seize their respective opportunities to move into second place after a goalless draw at Goodison Park.

Spurs were the more dominant side in the first half but couldn’t create a clear cut chance for Roberto Soldado, whilst Everton’s prolific Romelu Lukaku was kept quiet by Michael Dawson and Jan Vertonghen.

Here is the best of the Twitter reaction from the professionals, past and present, in chronological order to the stalemate.

Former Liverpool midfielder Dietmar Hamann ‏(@DietmarHamann) likes the look of Tottenham’s Belgian defender but is not such a fan of Roberto Soldado:

“Verthongen has been different class. I wonder how much more time Soldado gets, with Defoe and Lamela on bench. One goal from open play in 10!”

Spurs winger Harry Kane ‏(@hkane28) is satisfied with a point at Goodison Park: “Everton is a tough place to go! Not a bad point at all! #coys”

Southampton legend Matt Le Tissier ‏(@mattletiss7) is trying to decide if referee Kevin Friend had a good or a bad match: “Quick Twitter poll. How
many of the penalty calls did Kevin Friend get wrong in Everton match? None, one or both?”

Tottenham striker Emmanuel Adebayor (‏@E_Adebayor) wants the north London side to get back to winning ways as soon as possible: “We need to bounce back now, big game on Thursday. Going to continue to work hard this week. #COYS”

Former Toffees captain Phil Neville ‏(@fizzer18) enjoyed a return to his second home: “Trained this morning-then great to go back to Goodison and see some old friends at the Spurs game!”

Spurs midfielder Lewis Holtby ‏(@LewisHoltby) is happy: “Hard place to go to.. Very good first half, couldn’t get the Goal and struggled in the second half! But still ‘ave it! Thanks!”