Roger Federer may have done it all, or so it seems, but his journey is still a positive one 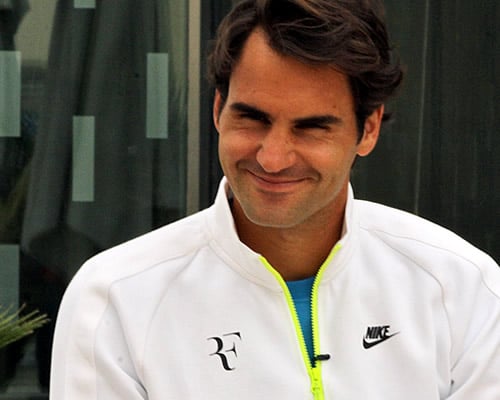 Roger Federer had, of course, every reason to feel in fine fettle when he strolled across the white marble lounge atop the Dubai Duty Free’s tournament hotel to fulfil—for the umpteenth time—his media obligations.

He is a six-time winner at this tournament in the desert—and defending champion to boot. He has a home here, and trains here, too. He also has the glow of someone who has just returned from a first holiday since his 2014 surge to five titles from 11 finals, a season in which he played more matches than any of his colleagues, got his hands on the Davis Cup, and even dipped a toe into the IPTL in Delhi.

And Federer is a family man, one who has slipped into his role as father to two pairs of twins with the same aplomb that he has, at the age of 33, slipped into the elder statesman role appropriate to someone with more than 1,000 match-wins and who owns more Grand Slams and more weeks at No1 than any other man.

I had a great year last year. I’m not disappointed I didn’t get to No1 yet

So little wonder, perhaps, that it is with a cheerful “Hello everyone!” that he settles into the hot seat, the most chilled person in this hot, windy city.

Thrown an early curve ball, though, the famous Swiss showed another of the keys to his prolonged success. He is, as he once described himself in London, a “glass-half-full kind of guy,” one who has been able temper a steel-hard competitive core with perspective and flexibility.

Less than a month ago, Federer lost in the third round of the Australian Open for the first time since 2001, and to a man he had beaten in all 10 of their previous meetings. Where does he find the motivation to counter that kind disappointment after so many years at the top?

“After a great start [winning] Brisbane, how do you get ready for Australia? That’s the only thing you think of in that moment. And once Australia is over, you utilise the time between that [Andreas Seppi] match and my first here the best way you can.

“And I guess being happy in your personal life helps. It makes it so much easier to travel the road and all that. And I like to play tennis… Go to practice and go to play matches, at the end of the day. That’s why I’m here: to play matches.”

So spoke the practical, pragmatic competitor—before adding the glass-half-full supplement: “It gave me more time off, so I was actually thankful to Seppi. That night I had champagne with my team, and I said ‘this is thanks to Seppi, now I got nine more days off!’

“Also allowed me to spend some of that time in practice as well, and I knew and was hoping to come back stronger. That’s the goal after a loss like that. You don’t start questioning anything, all you do is bounce back from it as quick as possible, and as strong as possible, because I’m actually playing very well if you look at the results of the last six months.”

Indeed. Here’s how the six months prior to Seppi reads. Federer lost out, just, in a five-set Wimbledon final, went on to reach the Toronto Masters final and win the Cincinnati Masters, made a semi run at the US Open, won both rubbers he played in the Davis Cup semis, shot around the globe to win the Shanghai Masters and back again for the Basel title. He reached the quarters of the Paris Masters and the final of the World Tour Finals before back injury cut him short—only to come back in time to play the winning rubber in the Davis Cup final.

It all took Federer to within touching distance of reclaiming the No1 ranking, but even that ‘failure’ seems to have left neither regret nor a pressing need to get back on the case, whatever his recently-announced clay schedule suggests.

He told me: “No, not really. I know that I would have had to win the Australian Open to get another shot at No1. So for the moment that’s totally out of the question. I’m too far away from Novak, who’s playing very well at the moment. So it’s back to normal, just play week by week and try to make the best possible results, I guess.

“I was surprised I got as close as I did at the end of last year, to be honest, but I played well and created some opportunities for beating Novak in some matches. If I had won Wimbledon, maybe things would have been different—but you know how it is: If…

“But then again, I had a great year last year. I’m not disappointed I didn’t get to No1 yet. I think Novak deserved it. He played so well when he really needed to in Paris and London and he’s deserving world No1. He continued that form at the Australian Open as well.

“We are where we are, and for me, it’s make sure I enjoy myself on the tour, and play as well as I can, and if he shows up across the net, I’ll try to beat him. It’s how it’s always been.”

Why then so many back-to-back clay events after bypassing the Miami Masters?

“Just a matter of changing up my schedule. I played Miami so many times… this allows me to either play [another] tournament on clay, allows me to practise more, allows a few more days off.

“A week in a tennis player’s life is a big deal so that’s why I decided to cut the hard-court season a bit shorter and give myself a bit more clay, and honestly I always wanted to go to Turkey and play in Istanbul. I’ve heard unbelievable things about the city. So I was like, OK, that’s my trade off.

“I think sometimes people don’t understand how nice it is and refreshing it is to go to a place maybe for the first time or for the first time in 10 years like Stan did in Rotterdam. People forget—how many times can you play Miami or Rome? Eventually you just need a change, to freshen up your schedule a little bit.”

But what of his much-loved Dubai, where a tough draw stands between him and four-time champion Djokovic, who could “show up across the net” in the final? Federer got the better of the Serb last year: This time, returning after a long break, he recognises things may be different.

“Well it would be a good start back, but I know it’s going to be tough because I’ve had a long break, one of the longer ones I’ve taken in years… So now the comeback might be a bit more difficult. So there’s maybe a bit more uncertainty. But you come back refreshed, and it might take one or two matches to get rolling.

“That’s where you need an OK draw, you need to fight your way through the first few matches, and then hope to play better. Here in Dubai, historically, it’s always been difficult to play very well from the get-go because the courts are fast… you’ve just got to be ready and fresh in your mind, I believe.”

With two-time Dubai finalist Mikhail Youzhny as Federer’s first opponent—they play the headline match tomorrow evening—followed by one of two aggressive top-30 men, Fernando Verdasco or Guillermo Garcia-Lopez, and then Seppi or Richard Gasquet barring his way to the semis, Federer may not have ‘an OK draw’, but he will be ‘ready and fresh’.

So much so that he’s opted into the doubles draw here, something he has not done since 2007. There’s that concept again: a fresh look. He may have done it all—or so it seems—but the Federer journey is still a positive one.