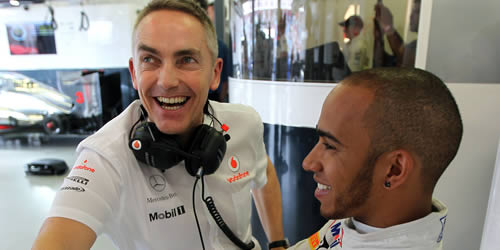 Martin Whitmarsh is confident McLaren duo Jenson Button and Lewis Hamilton will fight their way back into the title race this year.

Button sealed a second-place finish at Sunday’s German Grand Prix after Sebastian Vettel was demoted to fifth for an illegal manoeuvre to overtake the Briton on the penultimate lap at Hockenheim.

Hamilton, however, was hampered by a puncture early on and eventually retired to leave him fifth in the drivers’ standings and 62 points behind leader Fernando Alonso, who sealed his third win of the year in Germany.

Button is two places back in seventh and 86 points off the lead, but Whitmarsh is sure both drivers still have a shot at the title.

“We’re at the halfway point and we’ve got a lot of racing ahead of us,” said team principal Whitmarsh.

“They can both do it. This season is going to go right until the very end and I believe we are going to be sat on the edge of our seats right until the final laps of the Brazilian Grand Prix. I hope that I’m in deep agony in those last few laps as that means we’re in contention to win.”

Jenson Button finished third but was promoted to second thanks to Sebastian Vettel’s penalty at the German Grand Prix (Photo: Vodafone McLaren Mercedes)

“The car is good enough at the moment but we’ve still got half a season to go, so the onus is on us to keep developing it.

“We’ve got a reasonable amount of momentum in the system at the moment so we will be making the car quicker, but our competitors will be trying to respond as well and I think that’s what makes Formula 1 as exciting as it is.”

Whitmarsh also reserved praise for championship leader Alonso, who became the first driver to win three races this season after leading from pole at Hockenheim.

“Fernando is doing a great job and so is Ferrari,” he added. “They’re difficult to beat but it’s doable and we’re a motor racing team and we’re fighters.

“There are going to be some great races and what we have to concentrate now on race-by-race, trying to win and maximising points to see if we can erode that situation.”