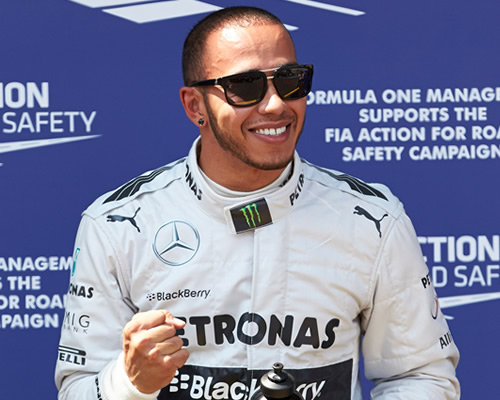 Lewis Hamilton admitted he was surprised when the Mercedes driver learned he had snatched Hungarian Grand Prix pole from championship leader Sebastian Vettel, admitting that he did not think it was a “great” lap.

The Brit could not believe his luck when his engineer announced over the radio that he had pipped the German to take his third consecutive pole and 30th of his career.

“With the temperatures it’s pretty tough. I was really surprised when I came across the line and they said I got pole. I didn’t feel like it was a great lap.” said Hamilton.

He revealed that Mercedes had brought in new upgrades this weekend, praised the team for working so hard and highlighted Vettel and Romain Grosjean as his race day rivals.

He added: “Starting on pole definitely helps as it’s difficult to follow here. It’s a long way down to turn one, but if you can get there first and try and hold position it’s definitely advantageous.

“These guys are going to be ridiculously fast so trying to keep in front or holding onto them is going to be the challenge.”

Vettel remains confident of a good result despite the qualifying setback.

He said: “There wasn’t much missing today but Lewis did a good job. I was pretty happy with both laps because I had two sets of new tyres, maybe I wasn’t aggressive enough in the middle.”

Grosjean has been the quickest of the two Lotus drivers all weekend, and headed into qualifying as the fastest in third practice, but couldn’t match the pace of Hamilton.

“I like this circuit, but that’s not important. It’s been a good weekend, we’ve been working hard with the team trying to get the best out of the car,” Grosjean said. “The last lap was pretty good. The race is very long and it’ll be very hot but we will see what we can do to get the best result.”

Paul Di Resta who qualified 18th confessed that he and his team were confused as to why the Brit performed so miserably.

He said: “You tell me what’s gone wrong – the team is confused. It just didn’t switch on, it just didn’t happen. When the team wanted more time, there was no way – that was it.”

Di Resta will be hoping to replicate Jenson Button’s victory in 2006 when he climbed from 14th place to take home a win.