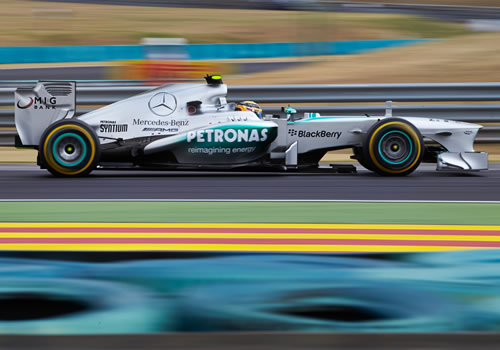 Lewis Hamilton sealed his first win for Mercedes at the Hungarian Grand Prix after leading for most of the race in Budapest.

The Brit took maximum points ahead of the Lotus of Kimi Raikkonen and world champion Sebastian Vettel to secure his 22nd career win.

Hamilton got a clean getaway from the grid unlike team-mate Nico Rosberg, who despite starting well got squeezed out and clashed with Felipe Massa to fall to 12th place.

Fellow Brit Paul Di Resta got off to a flying start from 18th, climbing up five places by the end of lap one – but failed to capitalise further in the race.

From lap 16 the real battle was for third place between Jenson Button, Vettel and Romain Grosjean.

The McLaren driver miraculously held his nerve for five laps much to the frustration of Red Bull’s Vettel.

The scrap turned into drama as Grosjean swiftly followed Vettel to overtake Button but was unable to complete the move safely, crashing into the Brit and going off the track – an incident which is to be investigated after the race.

There was disappointment for Adrian Sutil in his 100th race as he retired on lap 20 due to a hydraulic leak.

Grosjean thought his luck was in when he passed Felipe Massa on lap 29 after racing wheel to wheel, but his fortunes turned yet again when he was slapped with a drive-through penalty for completing the move while off the track.

The stewards were kept busy as they gave Sauber driver Nico Hulkenberg a drive-through penalty for speeding in the pit lane 10 laps later.

There were mixed feelings at Williams as Valtteri Bottas was forced to retire for the first time in his career during lap 45, while team-mate Pastor Maldonado finished in the points in 10th place.

It was a day to forget for Rosberg as he languished in the mid-field throughout the race and was forced to retire on lap 66.

The final laps saw Vettel push his Red Bull, which had a damaged front wing, to the limit in an attempt to steal second place from Raikkonen – with Vettel complaining the Finn did not leave him enough room.

Despite his valiant efforts the Lotus driver managed to keep him behind to take the runner-up spot.

The result leaves Hamilton fourth in the drivers’ standings heading into the summer break, 48 points behind leader Vettel.