Hungarian Grand Prix 2013: What lessons did we learn after Lewis Hamilton secured his first win for Mercedes at the Hungaroring? 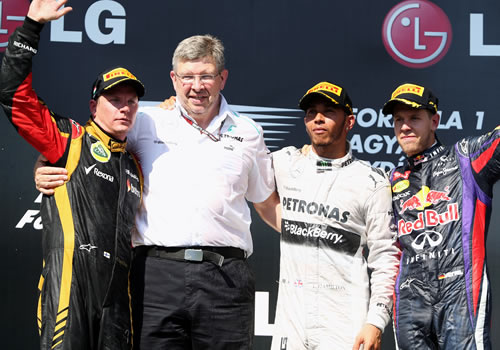 The drought is finally over for Hamilton

Despite performing well in qualifying throughout the season it seemed that Mercedes’ tyre woes would forever hold back Lewis Hamilton from winning. His victory at Budapest must be all the more sweet as he managed to equal Michael Schumacher’s record of winning at the circuit four times. Add to this the fact that the Brit has watched his team-mate Nico Rosberg stand on the top step of the podium twice this year – he was desperate to prove himself with a win. Hamilton had yet to win for Mercedes since joining them this year and had not won a race since the USA grand prix last year – 10 races ago.

Grosjean is a liability

Ironically, in the days coming up to the Hungarian Grand Prix Romain Grosjean admitted he felt more confident and experienced and was no longer a ‘rookie’ driver. It seems the Lotus driver spoke too soon – getting involved in not just one but two incidents in today’s race. The Frenchman clearly lacks proper judgement when overtaking and is literally an accident that is waiting to happen. Drivers should take the odd risk now and again but any risk must be calculated – Grosjean always seems to overstep the mark and it seems he never learns from his mistakes.

Button is a formidable opponent

You can’t help but feel sorry for Jenson Button – the Mclaren car is clearly not up to scratch, which has seen him biting the dust of his rivals. So it was encouraging to see his fight and determination pay off today against Sebastian Vettel. Button drove impeccably to keep the Red Bull driver behind him and it was a shame for the Brit to have his chances scuppered by a blundering Grosjean. His desire to win still burns bright and he punched well above his weight today – could this be a mid-season turn-around for the team?