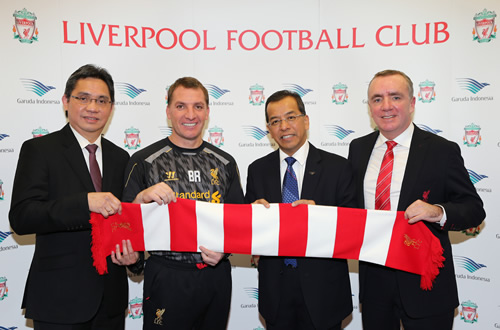 Ian Ayre has praised the “outstanding” work of Brendan Rodgers at Liverpool this season.

The Reds are currently on course to secure Champions League qualification for next season, with Rodgers’ side second in the table and just four points behind leaders Chelsea with 10 games left to play.

And Liverpool managing director Ayre has been thrilled with the impact Rodgers has had at Anfield since taking charge in May 2012.

“Both the efforts of Brendan and the players have been astounding,” Ayre told the Liverpool Echo.

“One of the things I really like is that Brendan works with the team and sets the season out into little chunks so they have four or five game runs.

“So they focus on a short number of games – they don’t focus on the entire season. And it’s worked well for them.

“They work as a group, they are focused as a group. The results are being delivered as a group and the performances of the players has blown everyone away.

“To get back into the top four has been the priority absolutely. But what I would say is that if you want to win anything, then you have to believe you can win it.”