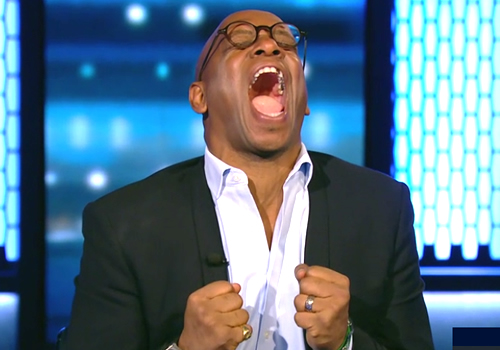 Ian Wright could not hide his delight after watching Arsenal produce an impressive display to beat Olympiacos 3-0 and reach the last 16 of the Champions League.

Olivier Giroud hit a superb hat-trick as Arsene Wenger’s men qualified as runners-up behind Bayern Munich in their group.

And former Arsenal striker Wright was beaming after the final whistle as he reacted to the game live on BT Sport.

Wright said: “It was one of the best performances I’ve ever seen in the Champions League.

“It was an uphill task for them. I thought they played very well, with discipline and took the chances. It was very comfortable in the end. I’m delighted for them.

“Arsene Wenger’s shown a lot of faith in this team, and maybe it’s because he’s seen them do stuff like that in training. But we just don’t see that consistent good play all the time, that’s why you can’t call what they’re going to do. But I called it tonight!”

Needing to win by any scoreline apart from 1-0 or 2-1 to reach the knockout phase, Arsenal took the lead in the 29th minute when Giroud headed home Aaron Ramsey’s cross in the box.

The France international then made it 2-0 four minutes after half-time when he coolly slotted home from close range after neat build-up play from Joel Campbell.

Giroud then completed his hat-trick with a well-taken penalty after Omar Elabdellaoui handled in the box.

Arsenal take on Aston Villa at Villa Park in the Premier League on Sunday.

Steven Gerrard: This Arsenal star is the best in the Premier League