Ibrahim Afellay ‘has no reason to leave’ Barcelona, insists agent 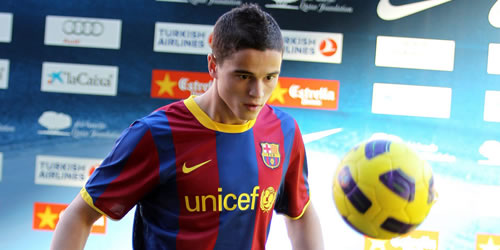 Ibrahim Afellay will not be leaving Barcelona this summer despite reported interest from Arsenal and Internazionale, according to the player’s agent.

The 26-year-old Holland international, who missed most of last season with a knee injury, has been the subject of speculation linking him with a move away from Camp Nou, with the Serie A and Premier League sides said to be interested.

Afellay only returned to action for Barça in late April but stated his desire to fight for a spot in Tito Vilanova’s first team.

Now, his agent Rob Jansen has denied rumours linking him with a move away from the Copa del Rey holders, insisting his client has “absolutely no reason” to leave Barça.

“People should not take all these rumours about an imminent transfer too serious,” Jansen was quoted as saying by Voetbal International.

“Leaving Barcelona is not an option at this point. Ibrahim is feeling very well at Barça and is getting playing time.

“It’s true that there’s plenty of interest, but that’s always been the case. There’s absolutely no reason for him to leave the club.”