ATP World Tour Finals 2012: Marianne Bevis looks back at Novak Djokovic and Roger Federer's run to the final in London

The final of finals, the season’s climax between the top tennis players of the year, saw the best of the best, the No1 and No2 in the world, outlast all others: Novak Djokovic and Roger Federer.

They had between them shared the top spot in the rankings throughout 2012. 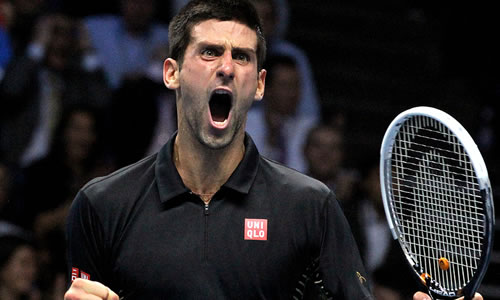 They had each won a Grand Slam, each won three Masters titles, each passed 70 match wins for the year, and would—by the end of this last contest of the year—each have a total of six titles.

They had met four times in 2012, and had each been victorious in a Grand Slam and a Masters.

And while Djokovic had won more Grand Slam matches through the year, reaching two other finals, Federer had won an Olympic silver medal. By the end of it all, they were even level on 12 match losses for the year. 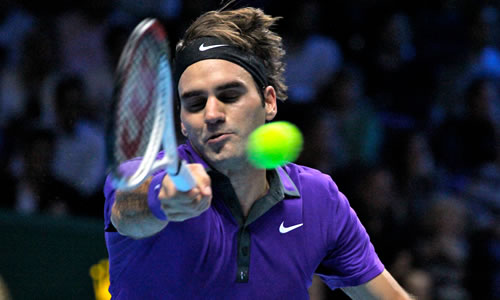 At the culmination of the biggest indoor tournament in the world—the WTFs passed the million mark in attendance and garnered more than 100 million viewers worldwide for this year’s event alone—their paths also followed the same path towards a final face-off.

The played on alternate days, and first Djokovic picked up two ATP awards—the year’s No1 player and the Humanitarian award—on court after Federer’s opening match

Then Federer returned the compliment after Djokovic’s match the next afternoon—picking up the Fans’ Favourite and Sportsmanship awards.

They were, though, eventually separated by one point: 96 to Djokovic, 95 to Federer. And that meant victory for the Serb—unbeaten in the tournament, a maximum 1,500 points to the good and $1,176,000 better off. 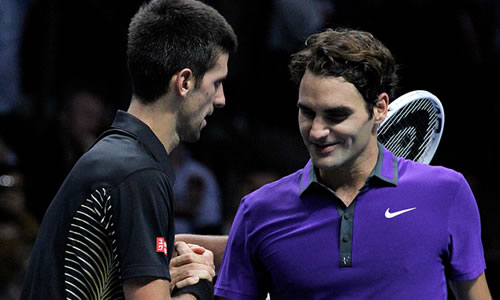 2012 had started with questions about both men. How could Djokovic possibly follow a year of 10 titles and just six lost matches? How could he defend a lead of more than 4,000 points over Rafael Nadal and almost 5,500 over No3 Federer?

And for his part, could Federer possibly contemplate a return to No1 from such a position? And what were his chances, realistically, of winning another Grand Slam in the face of competition from Djokovic, Nadal and, chasing from behind, Andy Murray? 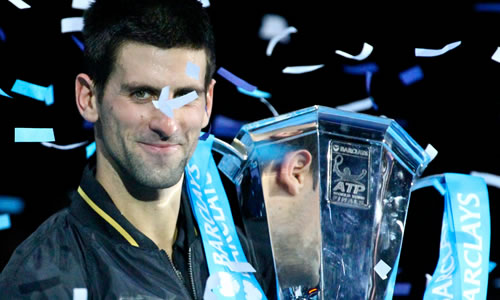 Well 2013 begins with those questions answered. Djokovic ends this year more than 2,500 ahead of the Federer and almost 5,000 ahead of the next man, Andy Murray. And this time, there are few who will question his ability to do it all again. And there may not be too many who question Federer’s chances of yet another Grand Slam, either.

Djokovic, on practising with Andy Murray prior to playing him:

Federer, on winning the Fans Favourite Award for the 10th time.

“For me, that’s a big thrill, probably one of the reasons also I’m still playing today. No doubt about it, they are inspiring me and motivating me to show up every day in practice, in the match courts and give my best, because I do feel I have big support and I do feel I need to reward them for their support.”

“The opening set could have gone either way. To be quite honest, he was the better player throughout the first set…After that, I relaxed a little bit more, stepped into the court, played more aggressive and it resulted with a straight-set win”

“I feel like I’m striking the ball well after today, I hope it’s a sign of more to come. But everything can be very different in my next press conference. I don’t want to get ahead of myself! I’m happy first one went so well.”

“I had to hang in there. That was my mind-set, to try to stay out there, win every point that I play. Mentally, don’t try to think what happened already or what’s going to happen, just be at the present moment. That helped me in the Shanghai final. It helped me once again here.”

“Again today, I think Ferrer showed why he’s so tough to beat. He makes you hit the extra shot, he makes it physical. You know that mentally he’s not going to go anywhere. That’s why he has so much respect from his fellow competitors.”

“If you are winning matches, obviously you feel better. But the fact is that, being the last tournament of the year, it is a challenge finding that last drop of energy—physical, mental…I played a lot of matches this year, but for the first time I won all three in my group. This is very encouraging for me.”

“I think my biggest struggle right now [is] to find a way to break him more consistently, more often, like I should have in the first set. But he’s doing a good job, playing clean tennis, bringing the heat on the serve, hitting his shots when he has to. His credit for really making it difficult for me…good effort by his side to get me twice in a row now.”

Asked about coping with the del Potro forehand:

“You can avoid that part of his game, try to get more shots in his backhand.

That was I think a change. I played a little bit more on his backhand side and got more opportunity to attack, where in the first set I played too much on his forehand, got crushed.”

“I was looking at having lost the last two matches against him, so I thought it was up to me to change things around and come up with a game plan that maybe was different than at the Olympics or Shanghai. So the pressure was really on me…I’m happy that the offensive play did pay off and it gives confidence doing more like that in the match tomorrow.”

Djokovic: “I knew that the only way for me to really win the match is to be consistently focused and committed to every point. He’s somebody that is very aggressive, that likes to finish his points very quickly. Especially when he’s a break up, he’s probably the best player I’ve ever played against. But I managed to get a lot of his shots back into the court…that was one of the goals, to always try to get him into the longer rallies where I think I had the better chance.”

Federer: “Obviously I was going to try to go after my shots and not just hand it to him. That’s just how I play tennis. If I have 80 errors and I win the match, I don’t care, I really don’t. For me it’s important to play the right way. I think I did that today.”

Check out the photo timeline for Federer and Djokovic through practices, matches, awards and the final.