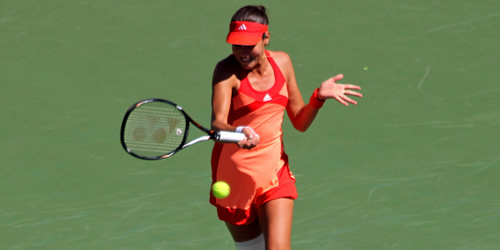 With two of the women’s semi-final places at the BNP Paribas Open already filled by storming performances from No1 Victoria Azaranka—extending her 2012 unbeaten record to 21 matches—and No19 Angelique Kerber—who won her maiden WTA title only last month in Paris—it was a question of whether the two former Indian Wells champions left in the draw could fill the other places.

The first of them, No15 seed Ana Ivanovic, won here in 2008 and, by an interesting twist of the draw, she would this year face the woman who beat her in last year’s quarter-finals.

On that occasion, No7 Marion Bartoli won a tight two-setter but went on to lose to eventual champion Caroline Wozniacki. This year, Ivanovic had already played and beaten Wozniacki, conceding just five games.

But then Ivanovic, the 2008 French Open champion, has been showing a real resurgence of form after a period in the tennis doldrums that saw her drop outside the top 20. She took on a new coach after Wimbledon last year, has worked on retooling her forehand, has got her serve back into good working order and has clearly done a lot of physical conditioning work. Already a tall and slender young woman, the 2012 model is even leaner.

Indian Wells has always been, in any case, a good event for the Serb. She has reached at least the quarter-finals on five occasions and, with the added incentive of reversing last year’s result against Bartoli, she took her game to the Frenchwoman almost from the off.

After losing her opening service game, Ivanovic broke back and then broke again to take a 5-3 lead. She afterwards identified that as a key moment:

“I really stepped up another notch and I really stayed low and I was sort of aggressive with my feet. I really played well the next few games, and then at beginning of the second set I broke her straightaway. I think that was very important.”

She broke Bartoli in the opening game of the second set and held to love for a 2-0 lead. And although Bartoli stopped the rot with a strong hold of serve, she was clearly not her usual energised self. There was none of her usual shadow hitting and bouncing between points, and she called for the doctor at 1-2.

Bartoli’s aggressive physical presence on the court is one of her biggest assets but in a depleted physical state, she never looked like breaking Ivanovic back, and the Serb served out the match, 6-4, in a business-like hour and 17 minutes.

The elegant Sharapova, taller even than Ivanovic and, remarkably, a veteran of the pro tour for more than a decade, had made nothing short of serene progress through to her quarter-final meeting with fellow Russian, No20 seed Maria Kirilenko.

Born within three months of each, the two women had nevertheless met only four times before, all on hard courts, and had two wins apiece. But Kirilenko’s progress through the draw was significantly tougher than Sharapova’s: two demanding three-setters against Lourdes Domínguez Lino and Nadia Petrova.

But Kirilenko is, rather like Bartoli on a good day, a formidably fit woman who has not only baseline power but the all-court skills that come from plenty of doubles action.

She immediately went on the attack, determined to take the role of aggressor that Sharapova likes to own, and broke her opponent for a 2-0 lead. She then held off a break point, matching Sharapova’s forehand stoke for stroke before unleashing two consecutive down-the-line winners.

Sharapova pulled the break back, only to be broken again, leaving Kirilenko to serve out the set 6-3. And she did not back off in the second, either.

Sharapova tried to take the initiative at the net in the opening game but in a battle of physical and aural venom, it was still Kirilenko who dominated and she converted the second of two break points with another forehand winner, and then held for a 2-0 lead.

But in an intense one-and-a-half-hour set, the advantage constantly switched between the two women. Sharapova took four straight games only to see Kirilenko level again at 4-4.

In a display of brutal hitting from both of them, each saved numerous break points with outright winners—Kirilenko eight out of 11, Sharapova seven from nine—and that one extra converted chance made the decisive difference. Kirilenko held serve in a marathon 10th game but on her next serve, she double faulted twice, went 0-40 down and lost the set, 7-5.

Once the match went to a third set, Sharapova rode her momentum with ever-growing conviction. She ran away to 4-0 lead, barely missing a shot—this was now one-two strike tennis. And despite a surprise break back in the fifth, there was no stopping the Sharapova surge. She sealed her semi place here for a fifth time, 6-2, after more than three hours.

She will face Ivanovic for the first time since the 2008 Australian Open final, which the Russian won in straight sets. On today’s evidence, their next match will be an intense, close and very glamorous affair.